In the misty rain
the rose mallows
make it a fine day.
Bashō 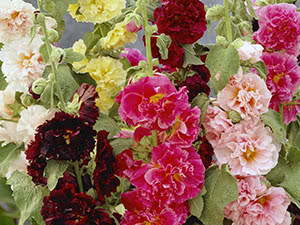 Malva (lat. Malva), or mallow, or hollyhock, is a genus of herbaceous, usually annual, sometimes biennial and perennial plants in the family Malvaceae. Today about 30 species of mallow grow in nature in the temperate climate of North Africa, North America, Asia and Europe. Malva was cultivated even in ancient Egypt and Greece: a description of the healing properties of the plant was found in the writings of Hippocrates and Pliny the Elder. In the twenties of the last century scientists discovered ecological plasticity and high fodder qualities of malva.
And large bright pink flowers always aroused the admiration of the artists who portrayed them in the paintings, and of the poets who praised them in verse. And how to imagine a Ukrainian cottage of wattle and daub without the malvas growing near it in the front garden? Or a Ukrainian ritual cloth without its embroidered bright pink flowers... 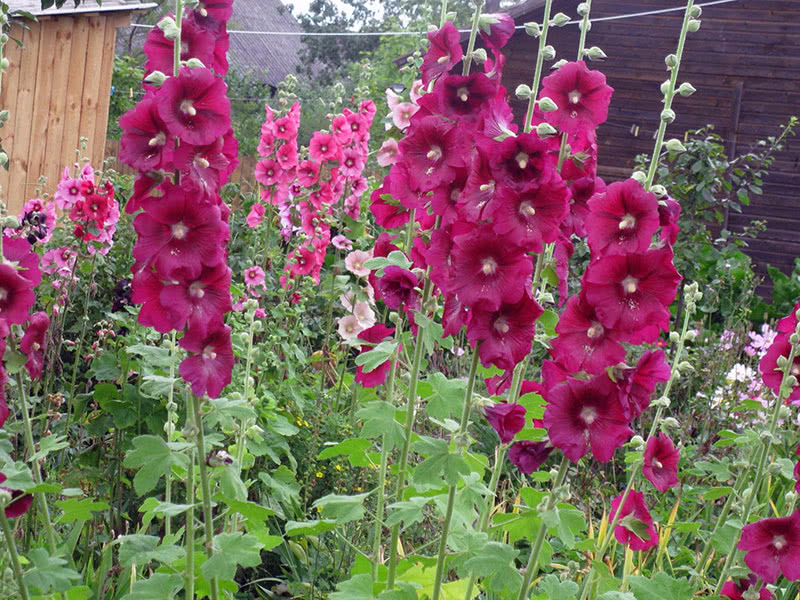 The most famous and ancient representative of the genus is common mallow. It is a plant with a straight, decumbent or ascending stem 11.8-47 inches high. It is fluffy and hairy at the base, and then it goes naked. Leaves of malva are cordate, round, incised or five-seven lobed, pubescent, petiolate. 1-5 large, up to 4.7 inches in diameter, bell-shaped flowers with distinctive purple strips are hidden in the axils of the leaves. The inflorescences of some species form clusters. Depending on the variety, simple or double flowers vary in color from almost black to white. Petals are oblong, obovate, deeply sinuate. The malva root is spindle-shaped, branched, long. The fruit is a schizocarp, the seeds retain germinate capacity for 2-3 years. Malva blooms from June to August. It is a frost-hardy, drought-resistant and minimal care plant.

Species and varieties of malva

In cultivation the genus of malva has about 60 species of ornamental plants. The progenitor of this genus is an annual common malva. Such species as hollyhock mallow, hybrid malva, musk-mallow and Russian hollyhock are predominantly perennials. In fact, it must be noted that not all growers include these species in the genus of mallow, considering, for example, that although hollyhock mallow, or hibiscus, and Russian hollyhock belong to the family of mallow, but they are related to another genus. Let's not quibble: plants have so much in common that it makes sense to combine them into one section about care and cultivation.

So, common malva (Malva sylvestris), or high mallow, is a biennial plant that in cold climate zone is grown as an annual one. It grows up to 4 ft in height, the distinguishing feature is that the color of veins is darker than of flowers. Popular varieties are mallow Zebrina that is distinguished by large flowers of tender pink color with dark red veins. The variety Black mother-of-pearl is also in demand, its dark purple flowers with black veins are up to 2.7 inches in diameter. 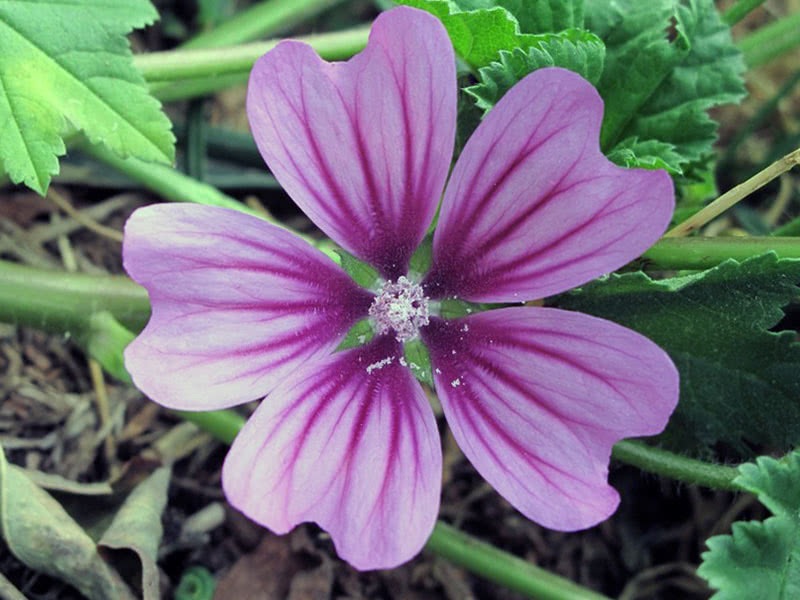 Musk-mallow (Malva moschata) is a low-growing perennial reaching up to 20 inches in height. Fragrant flowers of musk-mallow are white or pink, 2 inches in diameter. Popular varieties are White Tower and Pink Tower, 2.3 ft tall with snow-white or bright pink flowers, respectively. These varieties bloom until frosts. 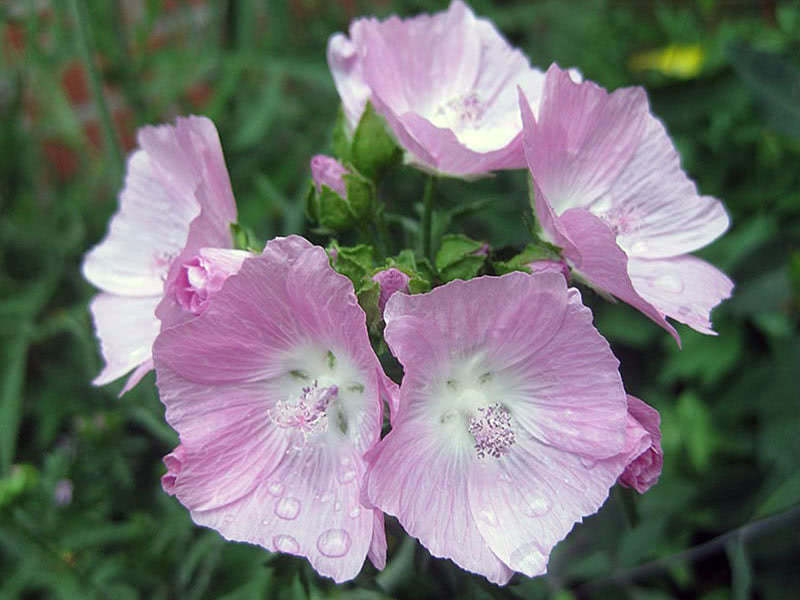 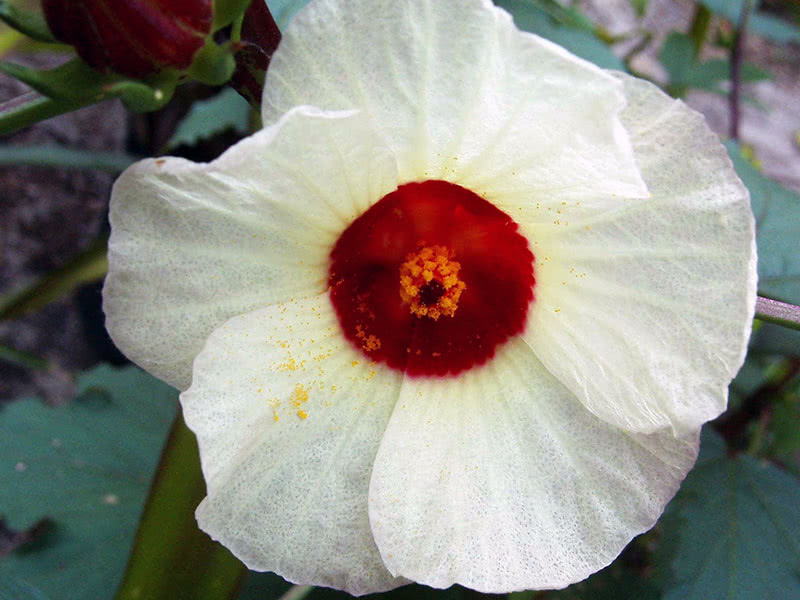 Hollyhock mallow, or Russian hollyhock, or yellow fig-leaved hollyhock, is called “malva” symbolically. In nature the plant reaches 6.6 ft in height, its flowers are 1.2 inches in diameter, yellow. It is a perennial plant. The garden form is greater musk-mallow or hollyhock mallow (Malva alcea). This perennial plant reaches 2.9 ft in height. It has varieties with both simple and semi-double and double flowers, resembling peonies. For example, the variety Chater's Double Strain is a double malva with large flowers of different colors, and Single Mixed has simple flowers resembling hibiscus. Hollyhocks are also different in size: the variety Powder Puffs Mixed, for example, reaches a height of 6.6 ft, and Majorette Mixed is a dwarf plant (up to 2.5 ft), but with large semi-double flowers. 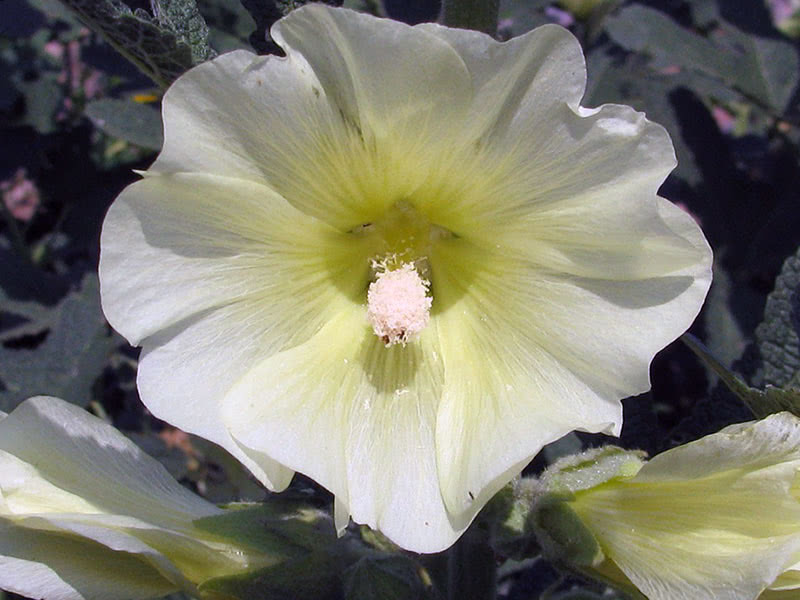 Hybrid malva (Malva hybrida) is a perennial plant with several stems, the height is up to 6.6 ft. The flowers are white or pink, double, very large. It blooms in June-September. Popular varieties are Chater’s Double, Gibbortello, Powder Puffs. 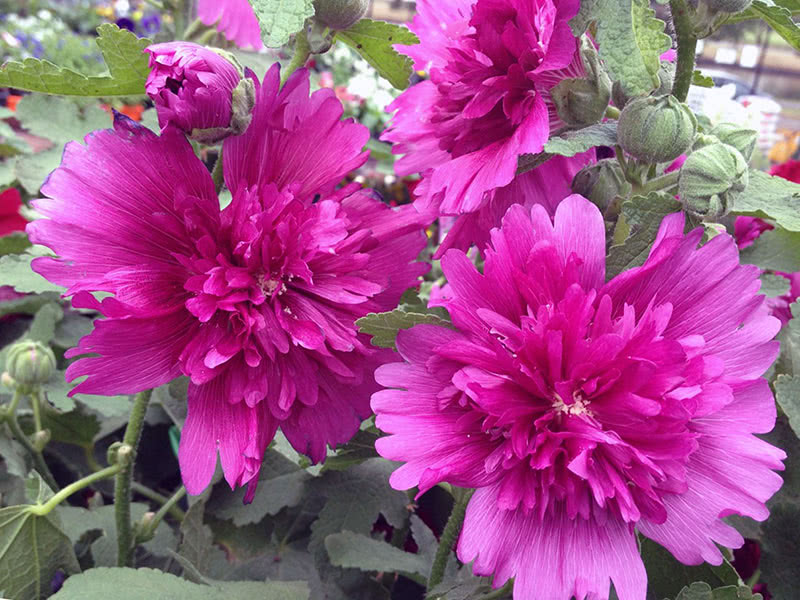 How to grow malva

If you do not want to take extra effort and do not hurry to see malva blooming in the current year, you can sow the seeds in the soil in May or June. But then your mallow will have time only to form a rosette of leaves before winter, and it will bloom only the next year. If you want malva to bloom this summer, you should sow the seeds in January and February to get seedlings. Even if you want to grow biennial or perennial mallow, the seedling method is still more reliable than the seed sowing. And this process is the same for annual and perennial malva, the only difference is when to sow. Annual malva is sown in the middle of winter, it is planted oun in the soil in May, and it blooms in mid-summer. Biennial and perennial malva are sown in May, it is planted in the ground in August or September.

Malva seeds, stored for a year or two or bought in a plant nursery, should be soaked in warm (113°F) water for 12 hours before planting in order to soften the hard shell of seeds and facilitate the germination process. It must be said that malva seeds that can retain their germination capacity for three years grow much better in the third year of their storage than in the first two years. For sowing of mallow to get seedlings it is better to use peat pots, because the roots of mallow badly tolerate transplantation and often do not take root in a new place. The temperature for seed germination should be 64-72ºF, then the shoots will appear in two weeks. If you sow the seeds in a container, then when seedlings have three leaves, you will have to thin them out so that there is a distance of 0.8-1.2 inches between the shoots. You can save the removed sprouts by gently pricking them into peat pots. When the seedling grows and gets stronger, it should be hardened by taking it outdoors for a few hours. In May-June the seedlings can be planted in the soil directly in the pots.

Choose the spot with full sun (malva can also grow in the partial shade, but it loses color strength and stem height), with well-drained soil that is loose loamy and rich in humus. The place for sowing should be high so that roots do not rot from the stagnation of thawed water. It will be nice if the site is protected from winds and drafts. It is best to plant malva along the fence: there will be a support to tie the stems to. If the soil is poor, you will have to fertilize it by mulching the site with humus. But we will describe it later. 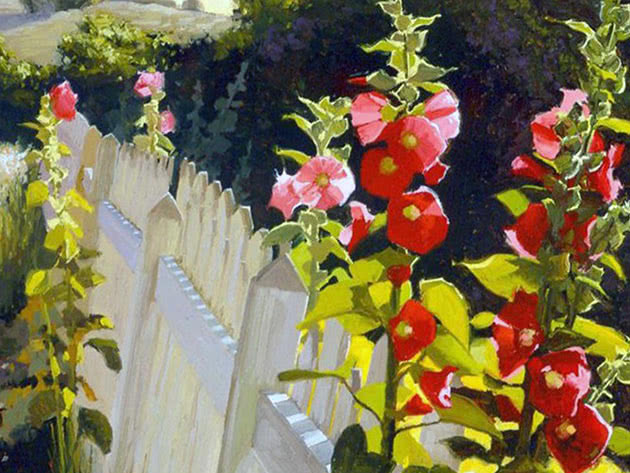 Planting of malva in the garden

Seedlings of annual malva are planted in the open ground in mid-May. Planting of seedlings of biennial or perennial malva is carried out in August-September. Seeds of biennial and perennial malva can be sown directly in the ground. It is carried out in spring, in April-May, after late frosts. Small holes up to 1.2 inches deep are made in the soil and 2-3 seeds are placed in each. Depending on what variety of malva you plant, the distance between the seedlings should be from 10 to 20 inches. The hole is filled with soil, compacted and moistened. If the weather is not reliable, use covering material, so that the sprouts will not be affected by possible frost. Under favorable weather conditions the shoots will emerge in two weeks. When the shoots have 3-4 leaves, they need to be thinned out, leaving one tall seedling in one hole. 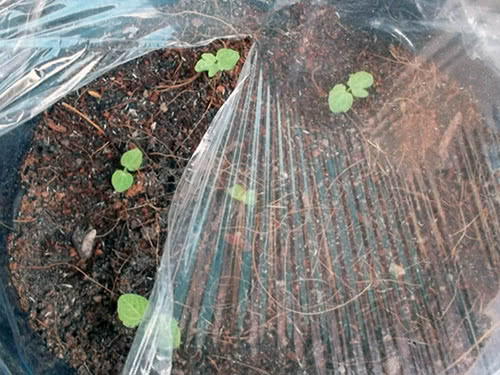 How to care for malva

Growing of malva is a simple process, since malva is a minimal care plant. Regular moderate watering, especially in dry summer, loosening of the soil and weeding, timely deadheading of spent flowers are a must in caring for malva. In addition, it would be good to feed the plant before budding with mineral fertilizers with a predominance of nitrogen. Tall malva needs staking not to get broken by strong gusts of wind, so plant it along the fence or dig in high pegs to stake the plant. Well, if you want to turn an annual plant into a perennial one, right after malva has finished flowering, cut off all flower stalks, so that the seeds do not have time to develop. That's all care of malva. 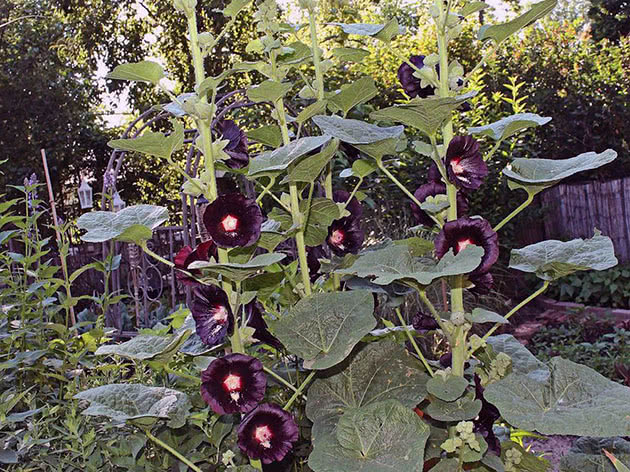 Diseases and pests of malva

Slugs may attack malva. They are collected by hand: put small cups in different places, pour beer into them and in a day collect slugs that crawl up to drink beer. Among a few diseases that infect malva, rust is the worst as the plant can easily get it near metal fences. The symptom of disease is dark red spots appearing on the downside of the leaves. Affected leaves need to be removed and burned. Sometimes powdery mildew appears on mallow. It is controlled with a solution of colloidal sulfur or a relevant fungicide. 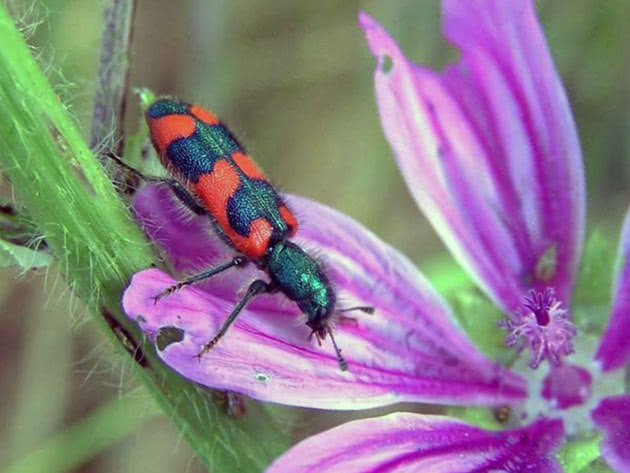 In autumn when malva has finished flowering, the stems are cut out to the ground level. At the same time you can fertilize the soil by covering it with humus and compost at a rate of 6.6-8.8 pounds per 11ft². Malva should overwinter under the cover of fir twigs, fallen leaves or straw. 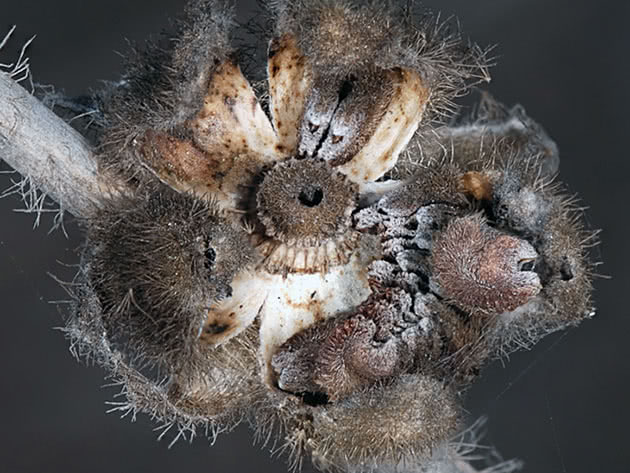 Malva has long been known in folk medicine. Beneficial properties of malva have been studied by healers in many countries. For example, infusion of flowers and leaves of malva cures inflammation of the stomach and intestinal disorders. Hot baths with steamed leaves or flowers of common malva help remove the swelling of the spleen. The leaves of common malva is a constant component of mixtures to cure cough. Lotions, compresses, the decoction of malva flowers are used for skin diseases to relieve itching and to heal wounds (obviously, due to the mucus contained in malva). Malva is also used in medical cosmetology to restore the epidermis and prevent pustular skin rash. Malva flowers are more preferable in folk medicine because their content of sugars, vitamin C and carotene is higher than of leaves. The main point is that malva drugs do not have undesirable side effects and have no contraindications. Useful properties of malva are: 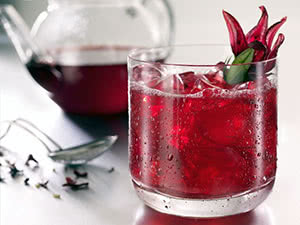 Malva tea to cure cough is: 2 teaspoons of finely chopped flowers (or leaves) are poured with a glass of boiling water and left for 10 minutes, drained, take 2-3 cups a day. You can add honey, but then the tea should not be warmer than 104 °F.

... Every year in May in the Kyoto temple of Kamigamo shrine there is a festival Aoi Matsuri, dedicated to malva. People wear bright clothes, go through the streets of the city with dances and songs. This is an ancient holiday...

The sun’s way
hollyhocks turn toward it
through all the rain of May.
Bashō