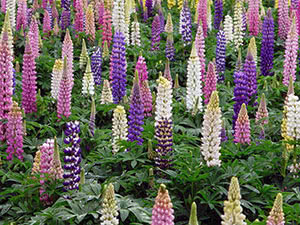 Lupin (lat. Lupinus) is a genus in the legume family that is represented by both annual and perennial herbaceous plants, shrubs, sub-shrubs and low-growing sub-shrubs. In Latin “lupus” means “wolf”, and the plant itself is sometimes called “lupin beans”. In the wild lupin flowers occur in two regions: in the Mediterranean-African region there are 11 annual and 1 perennial species of lupin, and in the Western Hemisphere, from Patagonia to Alaska and from the Atlantic to the Pacific, there are about 200 species.
Lupinus mutabilis (South American lupin) that was grown by the Incas, and lupinus polyphyllus (large-leaved lupin) are the only cultivated American species. Lupin plant is drought-resistant, so some of its species grow in the deserts of Arizona, California, Texas, Peru and Chile, and even in the Sahara. In 1911, the English breeder George Russell created highly ornamental species of lupins that were called “Russell hybrids”, and since then they have become a popular ornament of gardens and flower beds.

The root system of lupin is pivotal, growing 6.6 ft deep. The roots have small swellings that absorb nitrogen from the air and enrich the soil around the plant. The stems are woody or herbaceous, branches are creeping, outward-facing or upright. The leaves of lupin are alternate with long petioles, palmately compound, connected to the stem with a pulvinus with a long stipule. The inflorescence is an apical truss on which a large number of flowers that have a whorled, semi-whorled or alternate arrangement. The size of the truss of some species reaches 3.3 ft in height, the color of flowers is diverse: there are yellow, white, red, pink, cream and lilac, as well as all shades of purple lupins. Lupin seeds of different species differ in shape, size and color. Lupin beans of Mediterranean species are larger than American beans. When drying, the beans crack and scatter seeds around themselves – very small grains of lupin. Not only does lupin decorate the flowerbeds, it is also grown as a green manure: the lupin stems and leaves rotted in the ground become an excellent fertilizer. In addition, fodder lupin is also grown.

Growing of lupin from seeds

To get seedlings the lupin seeds are sown on a loose soil mixture, consisting of peat (one part), turf soil (one part) and sand (a half). Before sowing, the seeds are mixed with the tubercles of old lupins, crushed into powder, to accelerate the growth of nitrogen-absorbing bacteria. Seedlings will appear in a week or two, and if you want all seeds to germinate simultaneously, you need to cover the crops with moist gauze and keep them in a warm place. 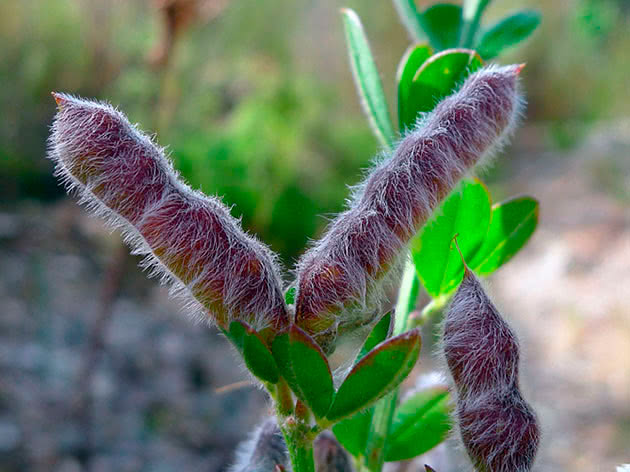 It should be noted that seed propagation does not guarantee that the young lupins will inherit the flower color and other characteristics of the mother plants. Lupin is usually grown from seeds for the purpose of selection experiment. Violet and pink colors dominate, so they will be preserved by the next generation, and white color is likely to be lost with seed propagation. After the appearance of 2-3 true leaves, the seedlings are planted in a permanent place: do not drag out transplanting, as the pivotal root system will become a significant obstacle. 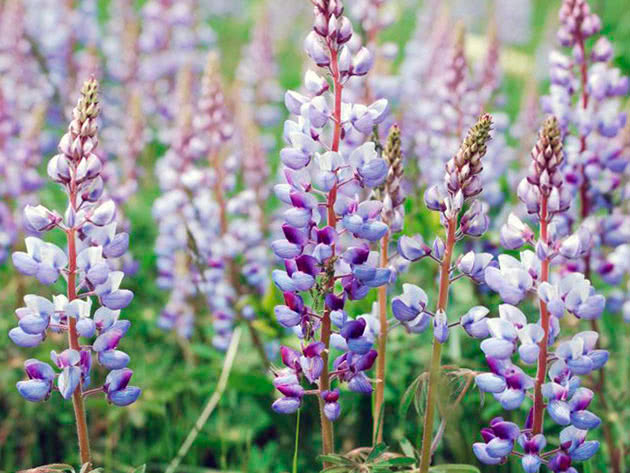 When to plant lupin

If you use a seedling method of propagation, then sow the seeds in early spring, at the beginning of March. If in spring you sow the seeds directly into the ground, lupin sowing should be carried out in April, after the snow has melted away, but the site should be prepared beforehand in autumn. Many flower growers prefer to sow lupin seeds in autumn, in late October. There are many advantages of autumn planting and there are almost no contraindications: the seeds will not have time to germinate before the onset of winter and they will ripen in the soil in very comfortable conditions. Seeds are buried 0.8 inche deep, then the site is mulched with peat, in spring lupin will sprout and bloom in August. If you grow lupin by a seedling way, then, as already mentioned, lupin planting is carried out when the seedlings have 2-3 leaves, and do not drag out not to have troubles with its transplanting. 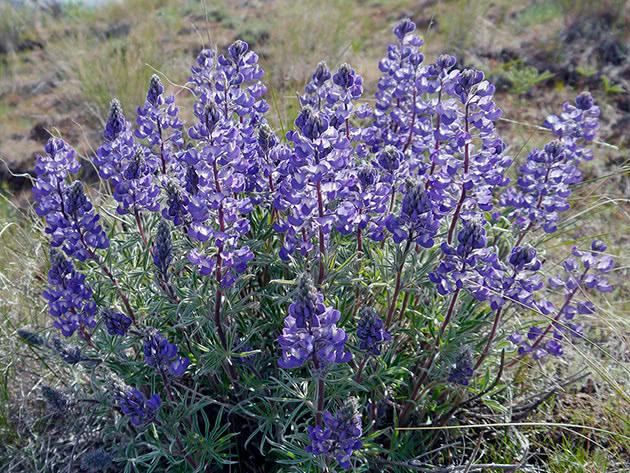 How to plant lupin

Lupin performs best in a weakly acidic or slightly alkaline loamy or sandy loamy soil in areas with full sun. In order to prepare the site for the spring planting of lupin seedlings, in autumn the acidic soil is limed with dolomitic or ground limestone at the rate of 11 pounds per 11 ft², and this will be enough for 3-4 years. Too alkaline soil is dug up with peat at the same rate – 11 pounds per 11 ft². In spring, germinated and strong seedlings are planted out in the soil prepared in autumn at a distance of 1-1.6 ft from each other.

How to care for lupin

Care of lupins is not complicated. If you grow wild perennial lupin, the first year you will have to regularly loosen the soil on the site and remove the emerging weeds. Over time, adult plants will need to be earthed up, as they gradually expose the root collar, and the side rosettes stand apart. In five or six years, old bushes will have to be removed, since the middle part of the bush dies off and the quality of flowering gets noticeably worse. Tall lupins need to be staked for their stems not to get wind broken. If you want lupins to bloom till the very cold, cut off the spent inflorescences without letting them dry. After this procedure perennial species bloom twice a season. Watering should be moderate, but in spring it should be generous.

Feeding of lupin is carried out in spring in the second year of growth with mineral fertilizers that do not contain nitrogen: about 0.7 oz of superphosphate and 0.2 oz of calcium chloride per 11 ft². Dressing is carried out every spring until it's time to plant out new lupins. 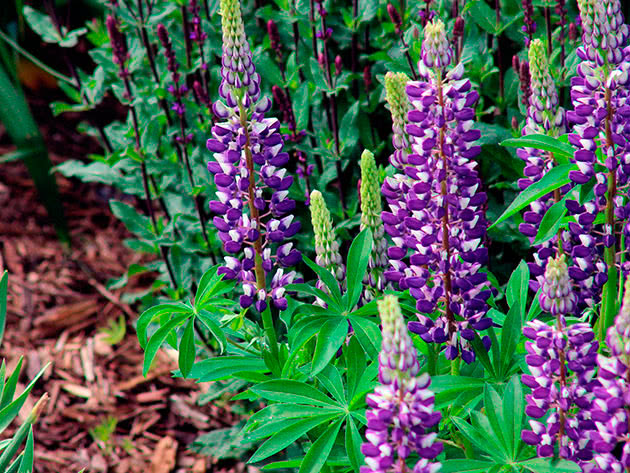 Pests and diseases of lupin

During the budding period lupin can be attacked by aphids, at a later time it can be attacked by larvae of seedcorn maggot and pea leaf weevil. To control them the plants are sprayed with insecticides. As to diseases, lupin can get infected by mold (gray and root), fusarium wilt, leaf spot disease and mosaic, phomopsis blight and rust. If you follow the rules of care of lupin, then there will be no need to fight with diseases and pests. The most important rule is the rule of crop rotation: lupin can be replanted on the site only in three years. The best predecessors for lupin are cereals.

How to collect lupin seeds

When to collect the lupin seeds

Once the lupin fruit has ripened, it cracks, and the seeds get scattered all over the site. To prevent this, you need to collect the seeds when the beans have turned yellow and just started drying. This will have to be done selectively several times. 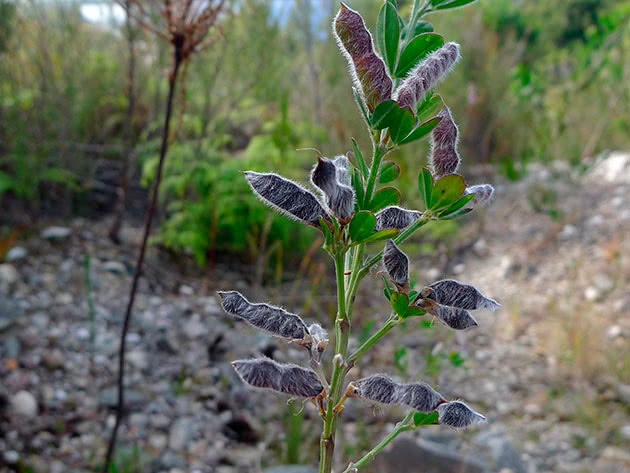 When lupin have faded, at the beginning of October, you need to cut off the peduncles and leaves, collect the seeds, if necessary. The bushes of wild perennial lupins should be earthed up to cover the naked root collar, and then they should be generously covered with sawdust as lupins are very cold in winter.

Species and varieties of lupins

We will describe you the most popular lupin species.

, is a herbaceous plant from 2.6 to 5 ft in height with a sparse upright stalk. The leaves are palmatipartite, the downside is coated with thin hairs. The flowers are fragrance-free, white, pink or purple that for some reason was considered blue, that is why it was called “blue lupin”; 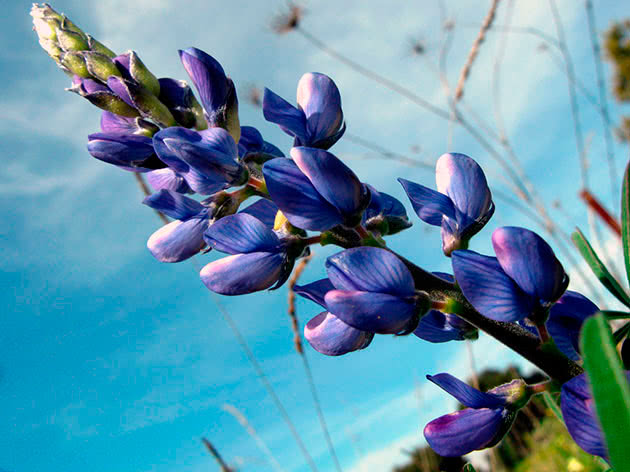 or garden lupin, originates from the Northwest of North America. It is winter-hardy, so it grows well in cold climate zones. The height is from 2.6 to 4 ft, the stems are straight and almost bare, the garden lupine leaf is palpate, on long petiole, the underside of the leaf is downy. The inflorescences are 11.8-13.7 inches long, consist of many blue flowers. It blooms three weeks in June, with the timely removal of wilted inflorescence it blooms again at the end of summer; 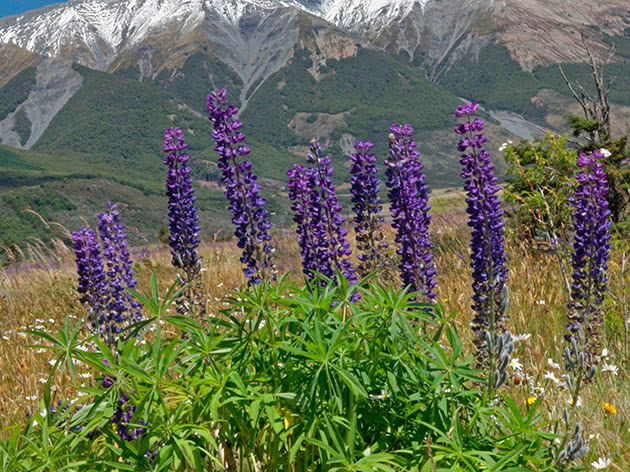 is an annual plant with a bare slightly pubescent stalk and with downy leaves on long petioles consisting of 5-9 blades. Yellow flowers has the aroma resembling the aroma of mignonette. The flowers are collected in whorled truss; 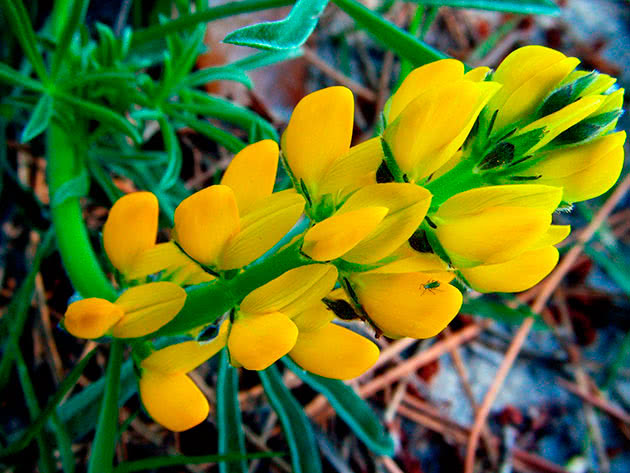 reaches up to 5 ft in height. Its stem is upright, branched at the top. The leaves are palmate, the downside is densely pubescent and the hairs form a silver rim around the leaves. The upper side of the leaves is smooth. The flowers are fragrance-free, white, pale pink or light blue, and arranged in a spiral. 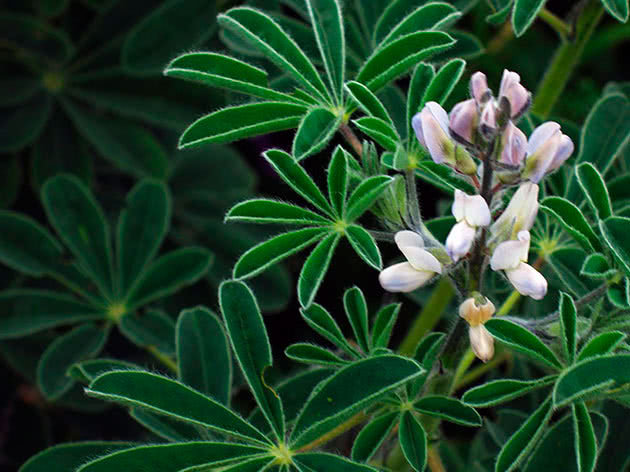 In addition to these species there are also such interesting species as: South American lupin, wild perennial lupin, wide-bannered lupin, low lupin, the Nootka lupin, tree lupine and others.

In cultivation, mostly hybrid varieties of large-leaved lupin are grown, for example:

But the most beautiful and popular among the flower growers varieties were bred by G. Russell: Burg Fraulein with purely white flowers, Main Schloss has the flowers with a brick-red hue, a series of low-growing, bright hybrids Minaret or Splendid belong to the group of single-color hybrids and varieties with vexillum of white or contrasting color.