Hydrangea in winter – pruning and covering 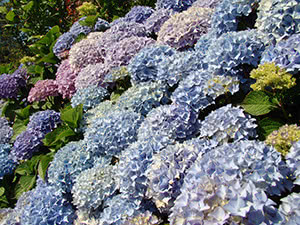 Hydrangea is a flowering plant in the family Hydrangeaceae and according to various sources there are from 30 to 80 species in nature. Among them there are shrubs and small trees that grow mostly in East and South Asia, China, Japan, the Far East and the Americas. The plant is named in honor of Hortense Princess about which nothing is known today. When botanists systemized the plant, hydrangea received the Greek name “hydrangea”, which is translated as “a vessel of water” – a form of seed capsules resembles a jug, and the plant itself loves water. In Japan the plant is called “Ajisay” meaning “a flower of purple Sun”.
Hydrangea was taken from Japan to Europe in 1820. Initially it was grown as a houseplant due to a low winter hardiness, but breeders were so enthusiastic about the cultivation of hydrangeas that by the mid of 20th century more than 100 garden varieties had been created. Now bigleaf hydrangea is presented widely enough by twelve popular species.

Most species of hydrangea is a shrub from 3.3 to 10 feet high. Among the hydrangeas there are trees and vines that climb the trunks of the trees to a height of 98.4 feet. Among the representatives of the genus there are evergreen and deciduous species. The latter is more popular in our latitudes as it blooms from spring to late autumn. Two types of flowers are collected in subglobose inflorescences at the tips of the stems. They are infertile at the edges and fruit-bearing in the middle. The flowers are mostly white, but such species as hydrangea macrophylla is represented by the varieties with pink, blue, purple and red flowers, and the color of the flower is affected by the soil acidity. For example, acidic soil produces blue flowers, alkaline soil results in blue and pink flowers, and a pale beige color is produced by neutral soil. The fruit of hydrangeas is a decompound capsule with seeds.

Besides hydrangea macrophylla, smooth hydrangea (wild hydrangea, or sevenbark) is also very popular in our area. It is famous for its cold-hardiness and ability to get restored after severe frosts. One more cold-hardy species is a panicled hydrangea. It is well known for its longevity as it can grow in one place up to 60 years.

Care for hydrangea implies its pruning. Some amateur flower growers say that the hydrangea is like lilac – the more it is pruned, the heavier it will bloom next year. But it is not exactly so since it is a true statement for panicled and smooth hydrangeas, but bigleaf hydrangeas do not like pruning at all. Bigleaf hydrangeas bloom on the last year’s shoots, therefore young branches that appear in this summer, should overwinter and only the next year they will bloom. As to the species with white flowers, namely, panicled and smooth hydrangeas, they bloom on the first-year’s shoots. That is why after pruning, as stated above, they receive many new buds that produce more flowers. It is recommended to prune hydrangea in spring, but you should do this carefully as the hydrangea can start crying plant sap. But many flower growers think that it’s better to prune hydrangea in autumn.

Based on the differences between species and the quality of pruning, hydrangeas are divided into two groups. The first group includes species, flowering on old shoots, such as the already mentioned hydrangea macrophylla, hydrangea serrata, hydrangea aspera, hydrangea sargentiana, oakleaf hydrangea and climbing hydrangea. Pruning of these hydrangeas can be only cosmetic with removing all last year’s inflorescences and weak old shoots keeping only the first pair of strong buds.

The second group includes species the buds of which are formed on shoots of the current year: panicled hydrangea and smooth hydrangea. The pruning of these species is carried out in spring, before the beginning of vegetation. Smooth hydrangea can be pruned only if it is already four years old, otherwise it may die losing sap. However, if you carry out the pruning in autumn, you will avoid such a problem. The adult and especially old plants that need to rejuvenate are cut down leaving only 4 inch stump of each shoot. If the bush is too large and old, do not cut it all at once, otherwise the short shoots will not be able to feed a large root mass. Rejuvenate the bush part by part for three years. 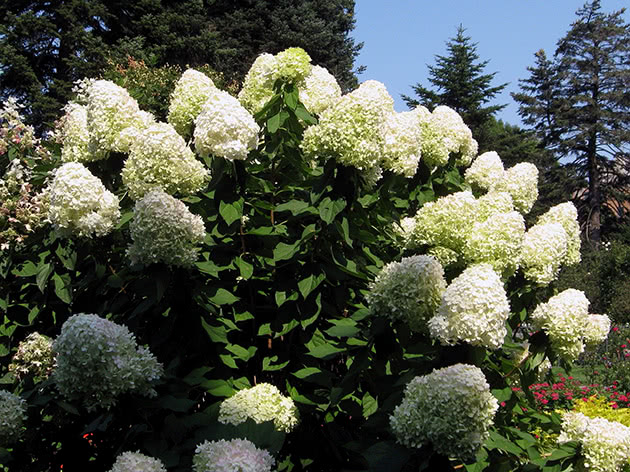 Panicled hydrangea is pruned moderately, like a tree, without touching the skeletal branches: among the shoots that grow from a single point, leave only those that grow outward.

Hydrangea pruning in autumn is absolutely safe and provides your plant with heavy blooming in the next year. The species of the second group require removing hydrangea blossoms since the fragile branches of the plant can get broken under the snow weight, especially if you do not plan to cover hydrangea in winter. In addition, you should remove old thick stems of the smooth hydrangea and thin weak shoots of panicled hydrangea, and the annual young shoots should be shortened to 2-5 buds.

Preparation of hydrangea for winter

Care for hydrangea in autumn, before frosts, implies covering of hydrangea for winter. Unfortunately, none of the species can overwinter in our areas without protection. Hence, preparation for winter should be thorough. Smooth hydrangea is the most cold-hardy, but even this species needs covering in winter, otherwise the tips of young shoots can get slightly frozen. 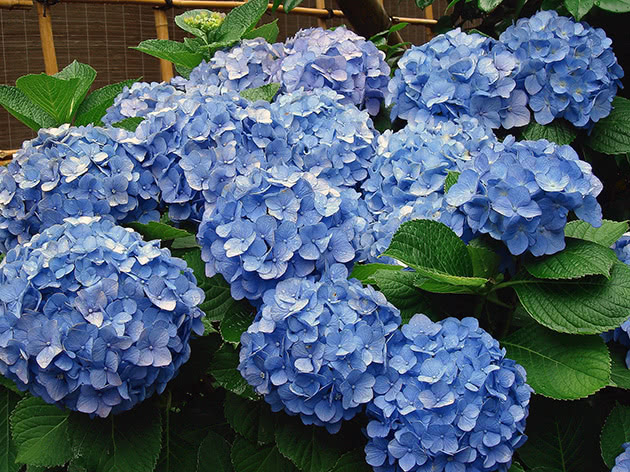 You should start preparation in the middle of September: remove all leaves, except of those on the top, in order to accelerate the lignification of the shoots, and feed the plant with the phosphorus-potassium fertilizers (hydrangea in autumn is not fertilized by nitrogen). Now you can cover hydrangea.

How to cover hydrangea for winter

There are several ways to cover hydrangea, but it all depends on the type of winter in your area. In southern areas it is enough to earth up the bushes of smooth or panicled hydrangea. If in your area winters are unpredictable, it is better to be overcautious and to cover the hydrangea anyway. Small plants can be completely covered by peat and a foil. Don’t be afraid that the plant will rot, this will not happen for sure. 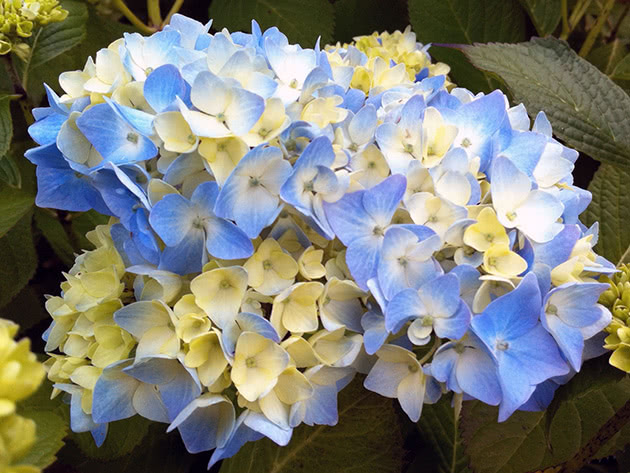 There is a proven way of covering a small young plant without doing any harm to it: put boards with hammered nails on the ground under the bush, tie a rope around the bush and tighten it slowly and smoothly to the ground and tie the plant to the boards. Then cover the bush with spruce branches or sawdust, and put a sheet of old iron on the top or cover with frost protection fabric.

One more way is to cover a bush stem with spruce branches, bend the hydrangea twigs to the ground radially outward from the center of the bush, fix the bases of the laid shoots by the brackets made of wood or metal, and cover the bush center with peat, place spruce branches on the shoots and cover the spruce branches with the frost protection fabric. It is better to press the fabric with boards and bricks not to be gone with the wind. Such covering of hydrangeas can sustain -40 ºF. 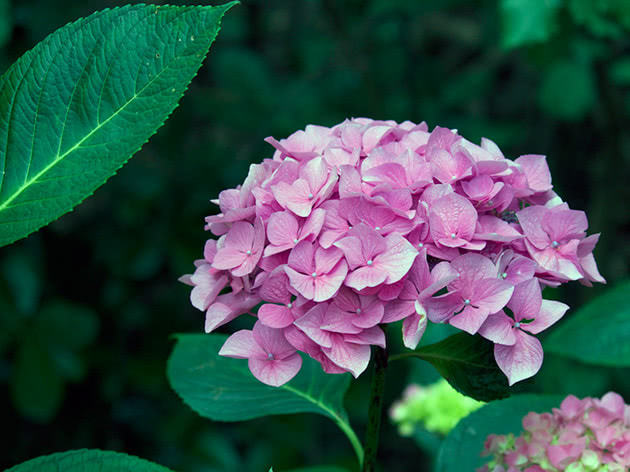 It will be very difficult to bend down old heavy bushes to the ground. The best winter shelter for them will be to wrap the shrub with the frost protection fabric, fix it with twine or tape, then mount a frame of metal mesh over the bush, which must be 5-6 inches above the plant. Place a lot of dry leaves inside of the frame and cover the top of the structure with roofing felt or polyethylene film.

The cold hardiness of hydrangeas will be gradually increasing and some day there will be no need to cover adult bushes at all. But young plants of the first years of life should be covered in any way, even if the winter is warm.