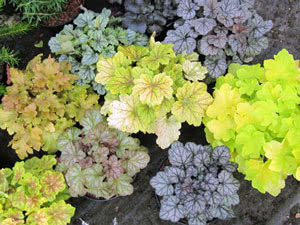 Heuchera, or alumroot, is a genus of rhizome herbaceous perennials in the family Saxifragaceae, cultural species and varieties of which are extremely in demand in modern landscape design. The plant received its name in honor of Johann Heinrich von Heucher, a German botanist and physician. Heuchera is native to the rocky regions of North America. It is a small shrub, up to 20 inches high, eye-catching with its luxurious, elegant foliage.
Heuchera is a plant for gourmets, because during one period of vegetation it can change the color of the leaves, and even several times. No other plant is distinguished by such an array of shades and by so many variants of their combinations as heuchera, and especially its modern variegated varieties.

The dense bush of heuchera is formed by leathery jagged leaves on long petioles. There is a considerable variety in the foliage shape and color: almost black, bright red, maroon, amber, pink, purple, yellow, green and even silvery leaves in all kinds of patterns and veins, specks and spots. As to the texture, the leaves can be smooth, wavy and curly. Heuchera blooms all summer till the very frosts with small pink, white, cream or red bells, collected in panicles. The fruit of heuchera is a capsule that contains up to 25,000 poppy-sized seeds. Heuchera has been used in landscape design for a long time. Designers divide heuchera into two categories: ornamental-deciduous the ancestor of which was American alumroot, and decorative-blossoming, such as heuchera sanguinea, or coral bells.

There are no strict rules or difficulties in growing of heuchera, but this plant has certain features that you should be aware of. So: 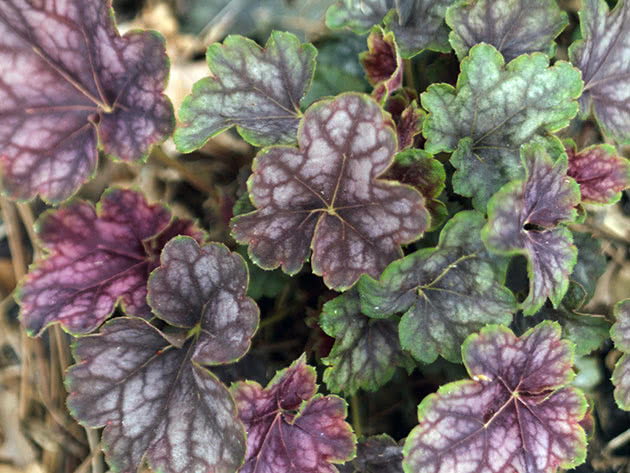 When to plant a heuchera

Heuchera is planted either in March or April. Heuchera is characterized by good shade tolerance, so the best place for it is the partial, dappled shade of other plants. The best spot is the eastern or western side with sunlight only in the morning or evening. If this is not possible, and you have to grow it in the full sun, you will have to provide the regular and more generous watering for heuchera. By the way, varieties with brightly colored leaves become even more striking and spectacular if they grow on sunny sites. Moreover, the varieties with red leaves should grow in the full sun since in the shade their leaves remain green. 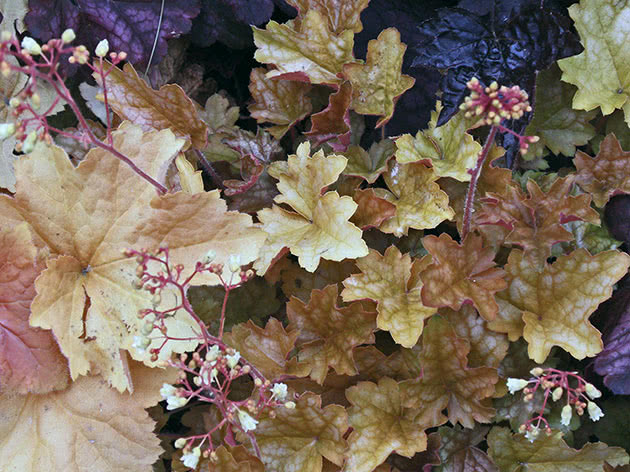 Heuchera performs well in a wide range of soils, but it does not tolerate acid soil, the optimal pH level should be 5-6. This plant is not even afraid of ricky sites since in the wild, in its natural habitat, it covers the rocky shores of the Great Lakes. But the more fertile and lighter the soil is, the more attractive and gorgeous heuchera will be. The soil water capacity and, at the same time, a good drainage of the soil on the site are of great importance. Heuchera does not stand stagnation of water in the roots.

How to plant heuchera

There are two ways of planting: by seeds and seedlings. Heuchera seeds are simply sown in the loose prepared soil and covered with a soil layer. But you should know that seed reproduction is not the best way, because it does not preserve the species and varietal characteristics of the mother plant, and at best you will have a simple heuchera with green leaves. 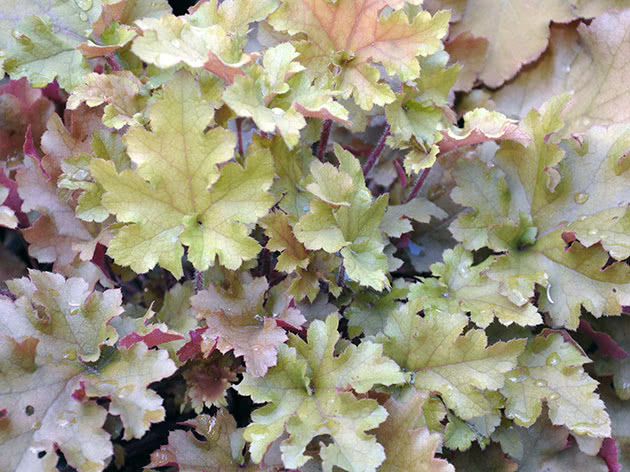 The seedling method is more reliable. Seedlings are grown in a greenhouse container and then planted out in an open ground to a depth of 1.2-1.6 inches and 8 inches apart. The soil must be loose so that air can freely penetrate into the roots. Both heuchera seeds in the open ground and seedlings sprout in a month and a half.

How to care for heuchera

It is easy to grow heuchera, and it is not tiresome to care for heuchera. By and large, it does not need any care. During the first year of vegetation, in the year of planting, the plant does not need feeding, in subsequent years decorative-flowering varieties should be fed with a fertilizer for flowering plants, and decorative-deciduous varieties prefer combined fertilizers for deciduous plants. The time for dressing is before and after flowering, and the amount of fertilizer should be reduced by half as compared to the recommended one on the package. 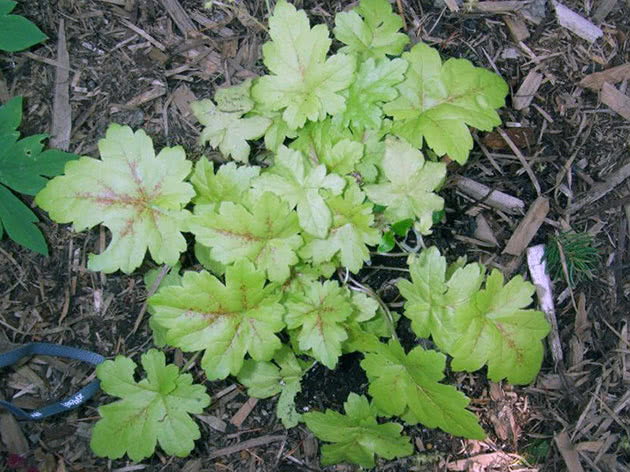 Watering of heuchera should be regular. As the soil dries up, water it every two days, and it's better to forget to water heuchera than water it twice as excess moisture hurts it. But in hot, dry days it will be necessary to water heuchera twice a day – early in the morning and in the evening. Carefully pour water under the bush, so that the splashes of water do not fall on the leaves as it burns them.

If you do not want to have troubles with the weeds and loose the soil after watering, in spring you should mulch the soil around heuchera with peat.

When the plant turns 3-4 years old, its rosette can fall apart and you will see the bare middle. Hence, it is time to divide the bush, plant out its parts, and rejuvenate heuchera. The best time for this way of propagation is May or the beginning of autumn. Divide the bush with each section having 2-3 rosettes. Too long roots should be shortened, and rotten roots should be cleaned from rot and treated with coal powder. Sections of the divided bush are planted in 12x12 holes, slightly deeper than the mother plant was planted, at a distance of 10 inches from each other. After planting, it is desirable to water and mulch the site. Parts of the bush take root within a month. This method of heuchera propagation is called bush division. 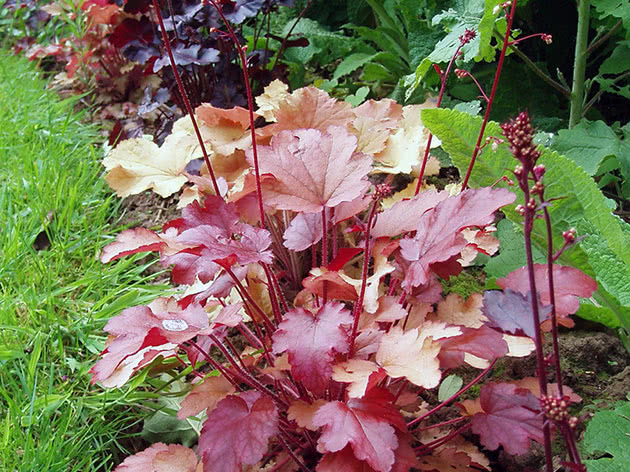 There is another way of heuchera propagation – through cuttings. Heuchera cuttings are made in June or July: the cuttings are sliced from the mother's bush as close to the ground surface as possible, but without fragments of the rhizome, divided into pieces of 1.6-2.4 inches long, the lower cuts are treated with a root hormone, partially removing the leaves, and immersed in a mixture of peat and sand in self-made greenhouses, placed in the partial shade. Do not forget to air the cuttings and moisten the soil in containers. Rooting occurs in 3-4 weeks.

Pests and diseases of heuchera

Heuchera is usually insusceptible to pests and diseases, but sometimes it can get affected by powdery mildew, rust, gray mold and leaf spot disease. The cause of these troubles is an excess of fertilizers or stagnant water in the roots of plants. Powdery mildew that covers the leaves with a whitish coating is controlled with a fungicide. And to get rid of leaf spots and rust, spray heuchera with a solution of the Bordeaux mixture twice a month. 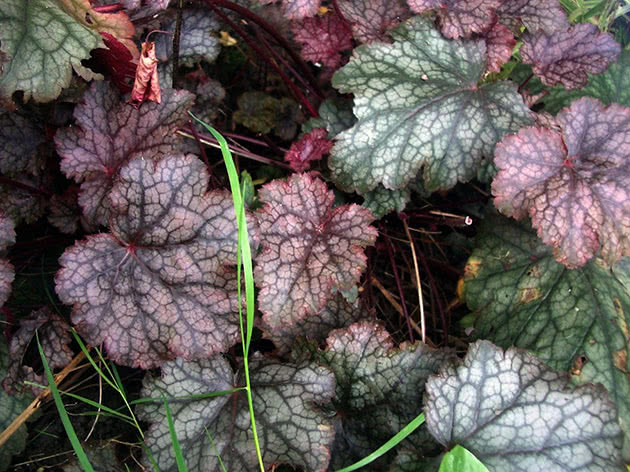 As to pests, heuchera can be attacked by snails, slugs, weevils, caterpillars and leaf nematodes. They are controlled by special insecticides.

Usually heuchera starts blooming in early summer and it lasts two months, and sometimes even longer. When in the garden heuchera blooms, it does not require any special care. Cut off the flower stalks of the spent flowers, if you do not want the heuchera seeds to ripen.

Preparation of heuchera for winter

Heuchera overwinters in the garden. In no way cut off the wilted and yellowed leaves of heuchera in autumn: they help the plant keep the roots warm in winter. In winter heuchera requires the covering, and it is better to use oak leaves for this purpose. When spring comes, remove the covering and gently cut off the last year's heuchera leaves with a secateur as close to the soil surface as possible. 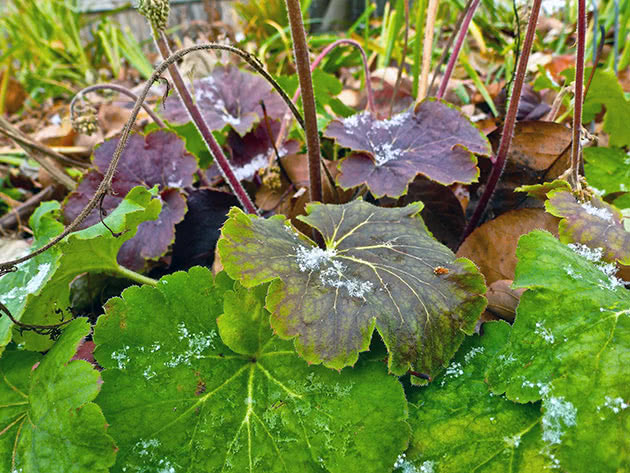 Species and varieties of heuchera

The genus of heuchera has about 70 species. In their natural habitat, many of them grow in the forests and open woodlands of the mountainous regions of Mexico and the USA. Conventionally, heuchera is divided into mountain and forest species. We will describe the most popular species and varieties that are used in landscape design and for breeding of new varieties. 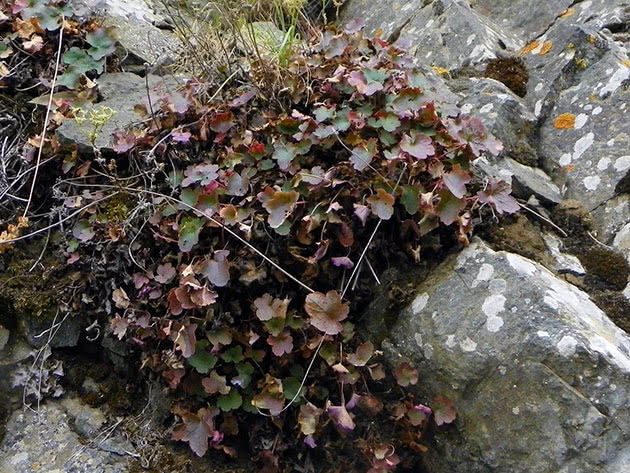 It belongs to mountain species. It has green leaves and bright red flowers. The Americans call it “coral bells”. The leaves of heuchera are round, toothed, blood-red, forming a rosette that is much denser than of other species. Some varieties of this species are distinguished by beautiful white or creamy spots on the leaves. The peduncles reach a height of 20 inches. This species is cold-resistant making it popular among the gardeners. The most famous varieties are Monet, Variegata, Hercules. 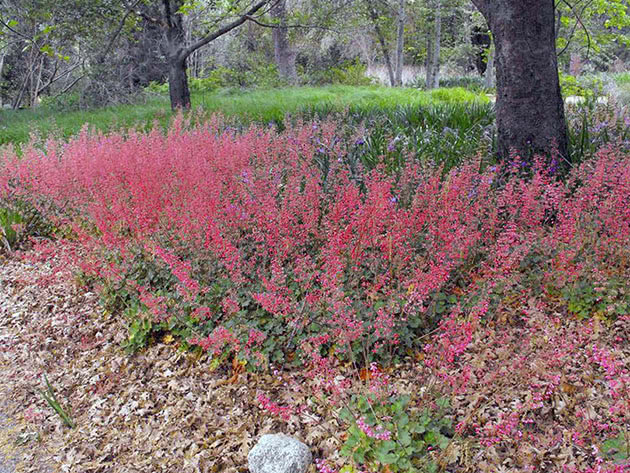 It is characterized by large leaves with a velvety surface and pubescent peduncles and cuttings, that is why it received such a name. The variety Bronze Wave has the largest leaves, up to 8 inches in diameter, of bronze color. The variety Rachael has not only flowers, but also peduncles of tender pink color. 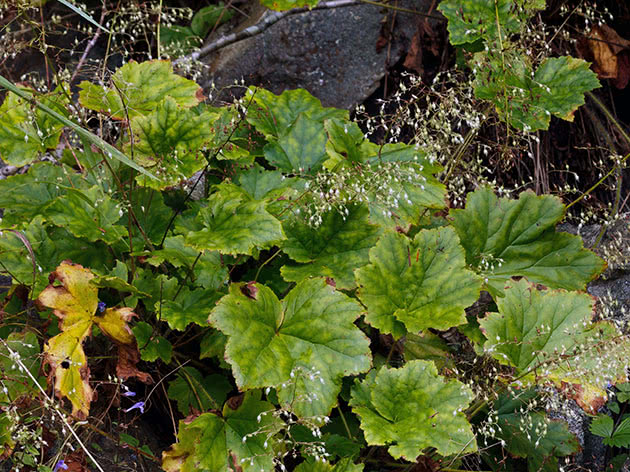 It is also a mountain species, it has not only eye-catching leaves, but also high flower stalks with a cloud of small flowers that seem to soar above the bush during flowering. This species is larger than the others, and this quality attracted breeders who obtained new varieties based on heuchera cylindrica. The peduncles reach a height of 3 ft, large flowers of white, pink, green and coral colors bloom on short pedicels. The leaves are cordate, round, green in color with a silvery pattern or veins of contrasting color. The varieties are Greenfinch with greenish-cream flowers, Hyperion (a low growing bush, the height of flower stalk is only 20 inches, the flowers are red and pink). 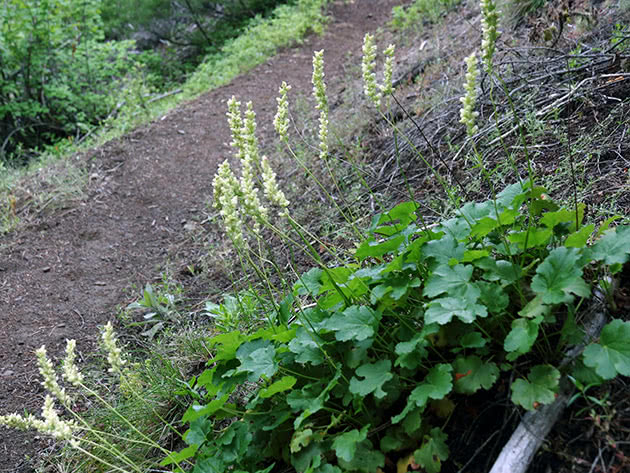 In the opinion of many florists, this is the most spectacular heuchera. Its leaf has the shape of a maple leaf, it is covered with silvery spots, and some of the specimens that grow in the wild are characterized by a purple shade of leaves. The peduncle is 2 ft in height, the paniculate inflorescence consists of small creamy pink flowers with orange anthers. The most famous varieties are Palace Purple with dark purple leaves that was designated a Perennial Plant of the Year for 1999, and Bressingham Bronze with bronze-brown leaves. 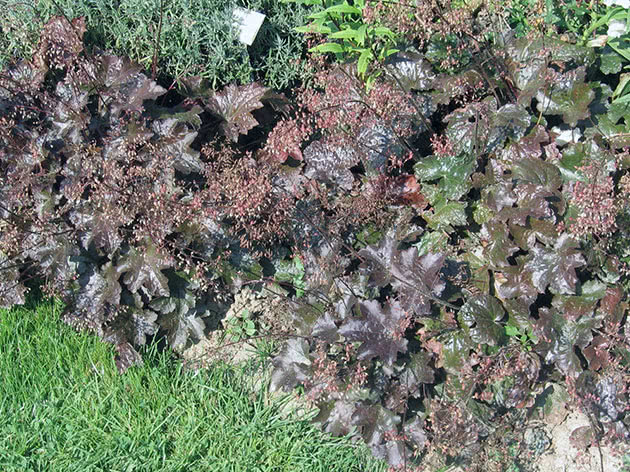 It grows on the shores of the Great Lakes. In the USA it is called “rock geranium”. It has attractive leaves, forming a rosette about 8 inches high. The downside of the leaves is brown and purple. The leaves are heart-shaped, round, with long petioles. The peduncles are 20-24 inches high, the panicles consist of yellow-green flowers. Green Spice is one of the most beautiful varieties of American alumroot, it has green leaves and contrasting silvery spots on them. During the growing season the leaves change the green color from yellow to darker shades, silver stains increase in size and magenta tint appears around the veins. 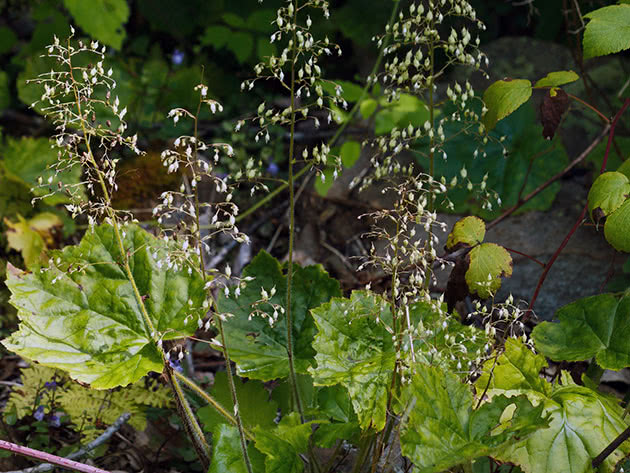 It includes interspecific hybrids of American alumroot, coral bells, and crevice alumroot. Flowers of this species resemble the flowers of coral bells, but they are somewhat larger, as well as the leaves with peduncles. Flowers of white, coral, red or pink colors bloom for more than two months. The color of the leaves is mostly green, but with contrasting veins and creamy spots. The only drawback of these hybrids is that the stems can get damaged by strong wind and rain. The varieties are Сan-сan, Cappuccino, Beauty Color, Ruby Veil and others. 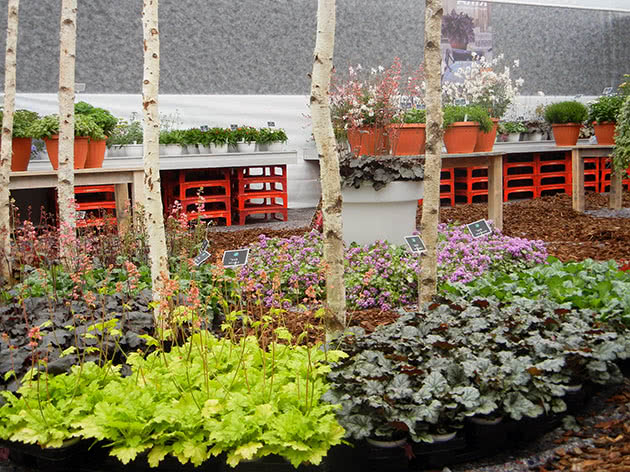 This plant is so cold-resistant that its leaves are not damaged even by the strongest frost. And this rare quality attracts both flower growers and breeders.