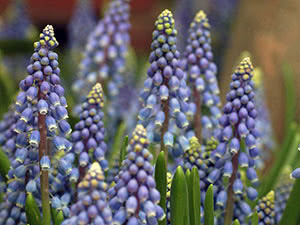 Muscari (lat. Muscari), or grape hyacinth, is the genus of bulbous perennial plants in the family Asparagaceae, although it was formerly included in the family Liliaceae as a member of Hyacintheae tribe. There are about 60 species growing in the wild among bushes, on forest edges and on the slopes of the mountains of Central and Southern Europe, the Caucasus, Asia Minor, the Crimea and the Mediterranean.
Flowers of grape hyacinth are one of the very first spring flowers, often cultivated for cutting. Grape hyacinth plant has a pleasant and quite strong aroma. Garden flowers of grape hyacinth, miniature and elegant, are an ornament of lawns, they are used on flower beds and in rock gardens, as well as bordering plants.

The bulbs of grape hyacinth are ovate, with light outer scales, 0.6-1.4 inches long and up to 0.8 inch in diameter. The leaves are basal, linear, up to 6.7 inches long and up to six in number, they appear in spring, but may appear again in autumn. Grape hyacinth reaches up to 12 inches in height. The flower stalks are leafless, the flowers have cylindrical, barrel-shaped or tubular perianth, consisting of six accreted leaves bent at the edge. The flower color varies from white to dark blue, the length and diameter are about 0.2 inch. The flowers are collected in dense inflorescences, racemose or apical, up to 3 inches long. The fruit is a winged, three-cavity capsule, spherical or cordate, with fine wrinkled black seeds, the germination capacity of which is retained only during the year. This genus has two significant advantages: almost all species are ornamental, and, in addition, grape hyacinth has low care requirements.

Species and varieties of grape hyacinth

Among all species mostly Armenian grape hyacinth, or garden grape-hyacinth, is cultivated. It blooms in late spring for three weeks. The upper flowers of its inflorescences are sterile and have lighter shade than the lower ones that are dark blue with a white border. Armenian grape hyacinth exudes a pleasant aroma. The most popular varieties are:: 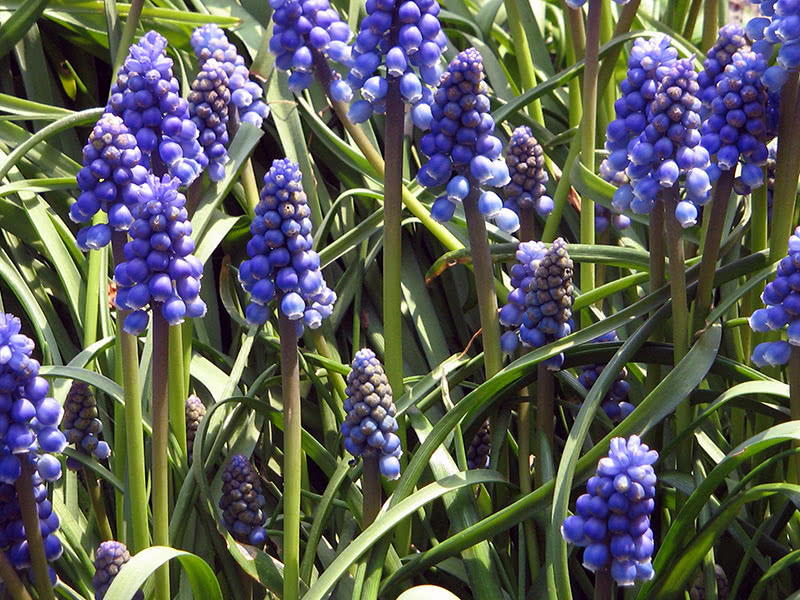 Small grape hyacinth is native to the Alpine region of Southern and Central Europe, it is one of the most popular species that has been cultivated since 1576. Its flowers are smaller than of Armenian grape hyacinth. In addition to the varieties with blue flowers, there are two garden varieties: 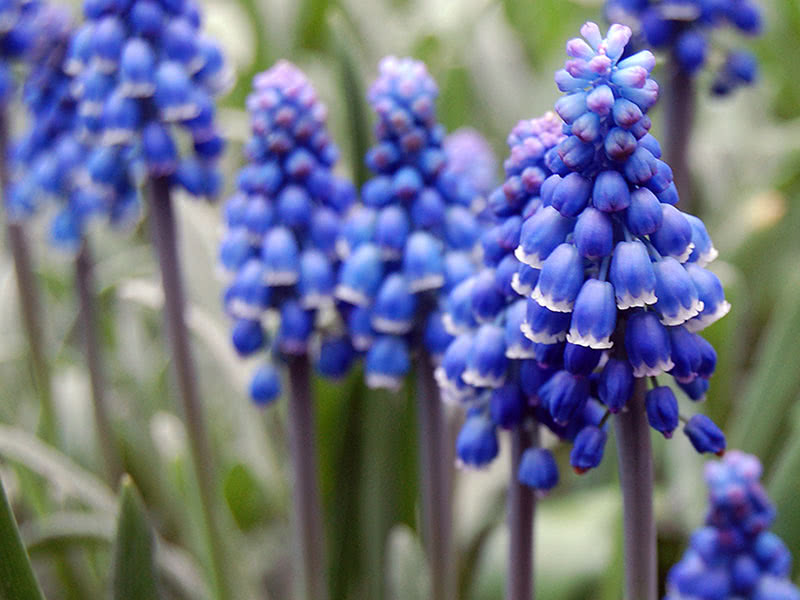 It is characterized by broad, like of a tulip, leaves and dense cylindrical inflorescences of dark blue color, and one bulb can produce several flower stalks.

It grows on the slopes of the mountains, small light blue bell-shaped flowers bloom on low-growing peduncles. Among the garden varieties the most popular ones are: 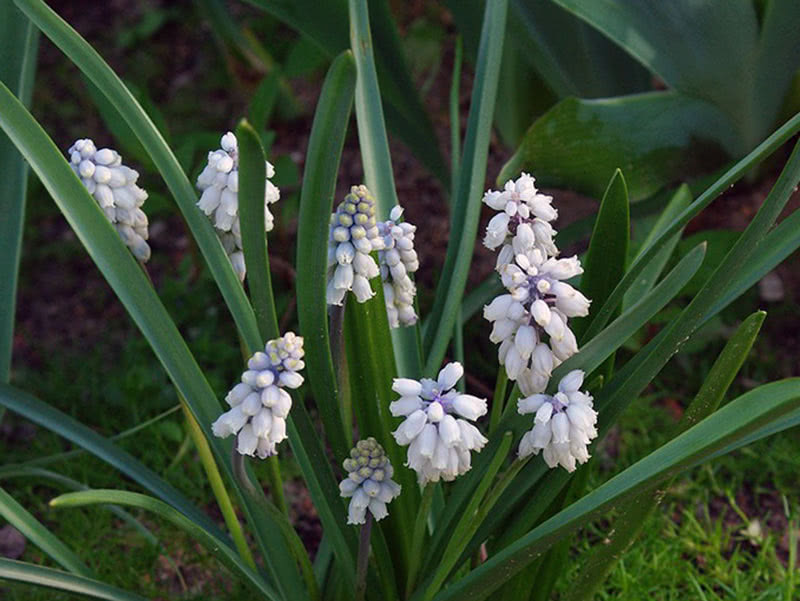 It is an unusual plant. In its natural habitat it grows among shrubs, on meadows and forest edges. On the flower stalk of this species there is a flower head with prominent violet blooms on arched pedicels. This plant looks great on lawns and against a background of ground-cover plants. The popular variety is: 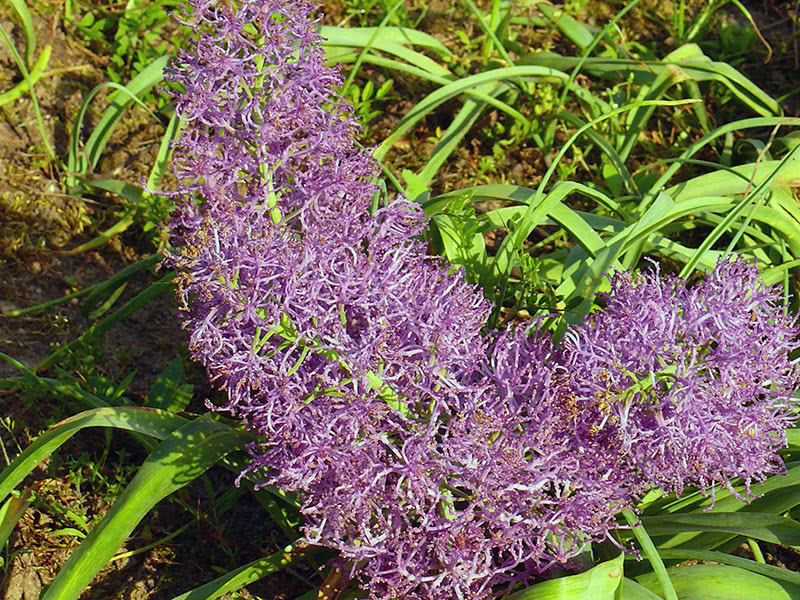 It grows in North-West Iran, blooms in the middle of winter with blue flowers with pale teeth. It requires good drainage. The flower growers distinguish:

Its Hebrew name is “kadan nahe” (beautiful), it can be found in the parks of Ashkelon. Flowering begins in winter: on low-growing flower stalks there are short dense egg-shaped inflorescences with bright blue flowers. Reversing teeth are white. 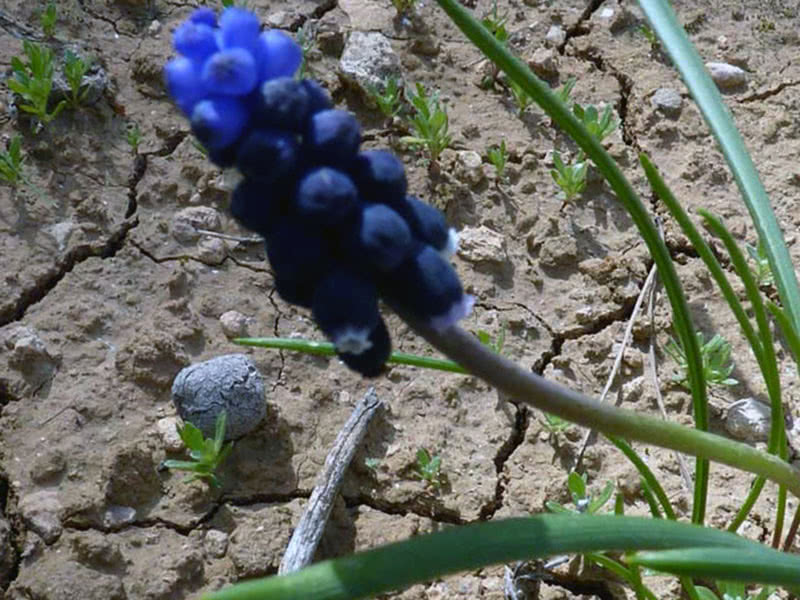 Growing of grape hyacinth in the garden

Grape hyacinth is very popular in floriculture. They look great in the rock gardens, as well as in ornamental garden vases. Dwarf varieties are used as bordering plants. Grape hyacinth is very attractive on stepped flower beds, in the designs with other spring flowers: the islands of tall early-flowering tulips or daffodils look very effective against a background of dense grape hyacinth of lilac-blue color. It is a great combination of blue grape hyacinth with orange fritillaries. 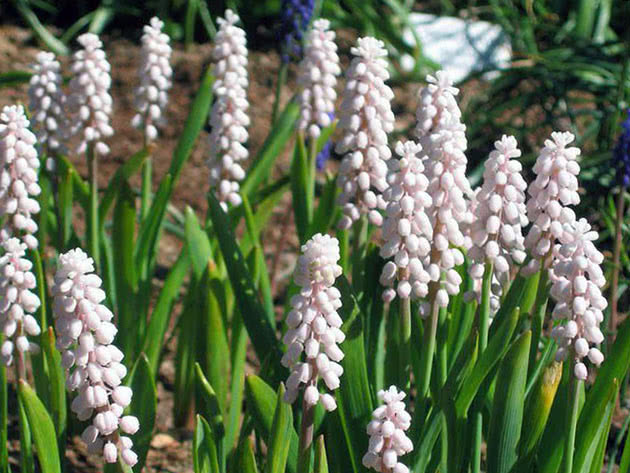 Like all early spring flowers, grape hyacinth blooms when there are no leaves on the trees and bushes yet, so there is a sufficient amount of sunlight. Grape hyacinth grows on one place for several years, so you can plant them next to perennials that you do not replant every year as well. The soil should be loose, fertile and water-permeable. It is desirable for the planting site to be elevated and protected from a strong wind.

When to plant grape hyacinth

It is better to plant grape hyacinth in autumn, until the end of October. They are planted in groups as soon as the bulbs that grew on one place for 5 years or more have been dug out. If you buy them in the store, carefully examine the shoots: they must be healthy. Sometimes in April, the nurseries sell the seedlings of already flowering grape hyacinths in boxes, and sellers say that they can be planted in the open ground. Try them. 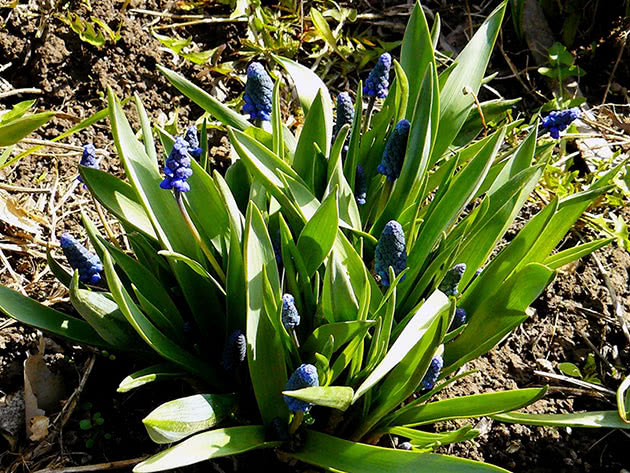 How to plant grape hyacinth

Before planting, inspect the bulbs and remove the darkened and damaged ones. As a preventative measure disinfect the bulbs: at first, immerse them in a 2% solution of malathion for half an hour, then soak them in a 1% solution of potassium permanganate for half an hour. One day before planting, water well the prepared bulbs, soaking thoroughly the whole layer of soil. Before planting add river sand in each planting hole for drainage. If the bulbs are large, they are buried 2.7 inches deep and 2-4 inches apart. Small bulbs are planted 1.2 inches deep, and 0.8-1.2 inches apart.

How to take care of grape hyacinth in the garden

Care of grape hyacinth is not laborious. This is an educational plant for a beginner florist. Watering is needed only at the very beginning of the growing season, but, as a rule, at that time the soil is still wet after the snow melting or spring rains. And during the dormant period watering is not required. If there was no snow in winter and spring was dry, then there is a need for regular watering. 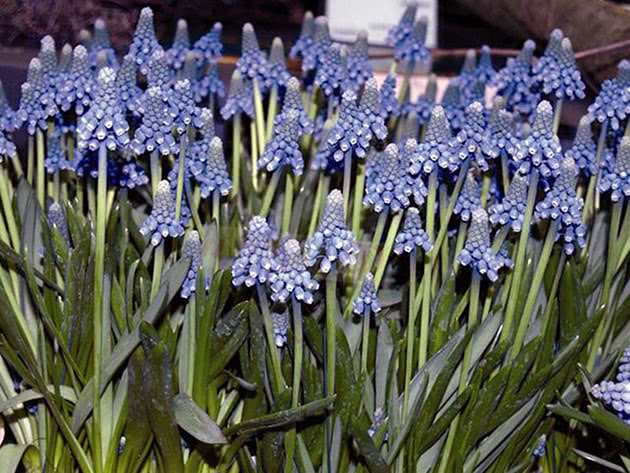 If on the planting site the soil is not fertile, this can be fixed by appliance of organic fertilizers. Humus or compost can fertilize the soil during autumn digging-up: per 11 ft² apply 11 pounds of a fertilizer. If such autumn digging-up with organic matter is carried out regularly, grape hyacinth grow on one site up to ten years. But later you will have to plant them out anyway.

Grape hyacinth blooms a little longer than three weeks, and does not require special care at this time, just loosen the soil slightly after watering, trying not to damage the bulb, remove the weeds and deadhead the spent flowers if they spoil the look of your flowerbed. If the quality of flowers has gotten worse over the years, then it's time for grape hyacinth to be transplanted.

In addition to the vegetative way, grape hyacinth is perfectly propagated by self-sowing, therefore, in order to prevent its uncontrolled growth over the site, it is necessary to cut off the flower stalks after flowering, leaving only a few for seed ripening. Collected ripened seeds that can germinate only within a year are sown to a depth of 0.4-0.8 inch in autumn. Next spring, thin threads of shoots will let you know that the process of bulb formation has begun. Such plant will bloom in 2-3 years. 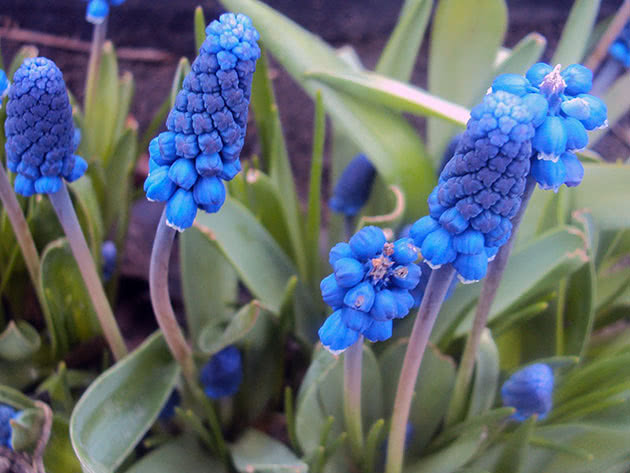 Pests and diseases of grape hyacinth

Grape hyacinth mostly suffers from mosaic that is caused by a yellow mosaic virus. Symptoms are a green pattern on the leaves, a shortened flower stalk, a narrowing of the leaves and a suppression of the growth of the affected specimen. Sometimes the plant becomes infected with a cucumber mosaic virus that manifests itself by pale green strokes and spots on deformed leaves. These viruses are spread by aphids and, having got into the bulb they are stored in it. Therefore, diseased specimens should be dug out and burned to prevent infection spreading. There is no treatment for viral diseases, so you should fight with aphids, infection carriers, and destroy them immediately as soon as they settle on the plants. The method is simple and well known: dilute 2 teaspoons of liquid soap in two glasses of water and sprinkle the plant with the solution. Sometimes grape hyacinth is attacked by spider mites. To control them use the drugs containing avermectin prepared according to the instructions at an air temperature of 64 °F.

Many growers believe that there is no need to take care of grape hyacinth at all: they do not get sick, they are propagated by themselves, they are quite winter-hardy. But experience shows that a good result always requires effort. As soon as the grape hyacinth finishes flowering, you should carefully remove the flower stalks and feed the plants with a liquid potassium-phosphorus fertilizer that will help the bulbs overwinter well. Gradually shorten the watering until the leaves of the plant turn yellow and fade, and, as soon as this process is completed, cease watering of the plants. Autumn is the time for digging-up the site and transplanting of grape hyacinth that has turned 5 years old. If your grape hyacinths are still too young to be divided and transplanted, just remove the yellowed leaves from the site. Young grape hyacinths, especially if they grow next to other onions, should be mulched with peat before winter. 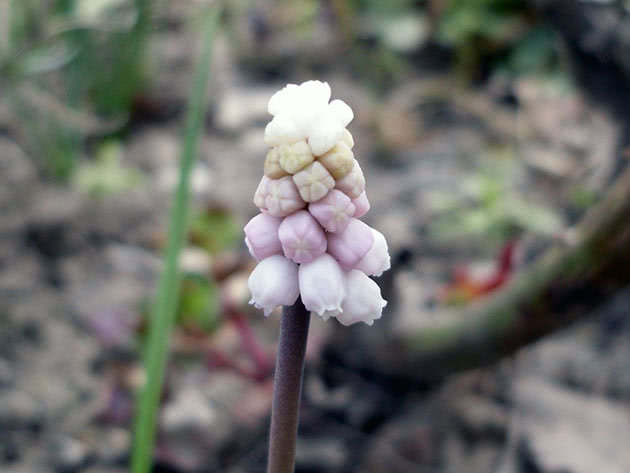 Grape hyacinths are perennial plants, moreover, they can grow on one place for ten consecutive years. But if for some reason you decided to dig the bulbs out and store them indoors, then you should keep the following rules:

But we will remind you once again: it is better to plant grape hyacinth in autumn, during the digging-up of the site, then it is also convenient to separate the babies from the mother bulbs with their subsequent planting, so it makes no sense to store the bulbs of grape hyacinth indoors until spring.