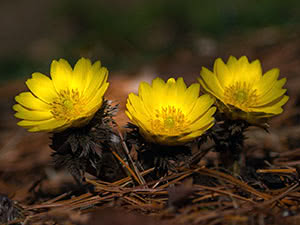 Adonis flower (lat. Adonis), or pheasant’s-eye, belongs to the genus Ranunculaceae, that includes, according to different sources, from 20 to 45 species of herbaceous annuals and perennials growing in Europe and some regions of Asia with a temperate climate. Adonis plant prefers a mild summer. Its Latin name comes from the Greek myth and was given in honor of the son of the Cyprian king, Aphrodite's lover, Adonis, who died when hunting a wild boar.
The blood of Adonis colored the flowers and plants in red, so the name “adonis” should refer only to species with red flowers, although there are not many of them in the genus. According to another version, the name of the flower comes from the name of the Assyrian god Adon.
Adonis had become popular in cultivation only by the end of the XVII century, but since then adonis is constantly grown in parks, gardens and flower beds. Planting and caring for adonis in the open ground, as well as a description of plant species are the topics of this article.

The stems of adonis are simple or branched, the leaves are multiply palmatisected or pinnatisected into narrow lobes. Bright glossy single flowers of red, but mostly yellow, from 1.6 to 2.4 inches in diametre, with from 10 to 20 petals, are located at the tips of the shoots. Adonis fruits are follicle containing wrinkled seeds with a bent or straight beak. All parts of adonis are poisonous.

Growing of adonis from seeds

Adonis seeds lose their germination qualities very quickly, therefore it is better to sow the seed material immediately after its harvesting before winter, in November, at a depth of 0.4-0.8 inch. And it concerns only annual plant species. The best germination is obtained by seeds collected from six- or seven-year-old shrubs. They germinate at a temperature of 41ºF. The sowing of the adapted seeds (bought in the store) is produced in March in greenhouses, using a soil consisting of 2-3 parts of sand, one part of the sod land and one part of humus. Seedlings appear in two or three weeks. Seeds of perennial adonis are sown in autumn in seed starter pots with an above described substrate. The pots are kept in a cold cellar, and then in winter they are buried in the snow. Shoots will appear only next spring, when the air warms up to 68 ºF. But some seeds germinate only a year later. 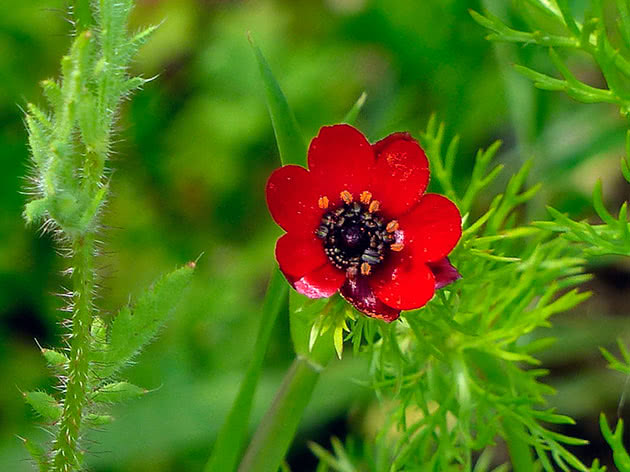 Emerging shoots need bright diffused light and shading from the full sun. Also, care of adonis flowers at this stage of development includes daily watering and careful loosening of the soil. When the seedlings grow a little bit, they should be thinned out, so that the distance between them is 6-7.8 inches, but take your time in April: soon seedlings will be planted in the ground, and an additional transplanting may harm adonis.

Adonis planting in the open ground

When to plant adonis in the open ground

Planting of adonis in the open ground is carried out when the seedlings get stronger. It can be April or May, and maybe August or September – it all depends in what season the shoots appeared, but you need to remember that the plants will need at least a month to take root before the onset of cold weather. The planting site for adonis should be with full sun or slightly shaded, the ideal variant is the place in the garden with full sun in the morning, and with shade after dinner. If you want adonis to flower profusely, then provide it with a light, well drained soil, rich in lime and organic. The hydrogen index should be within 7.0-7.5 units. 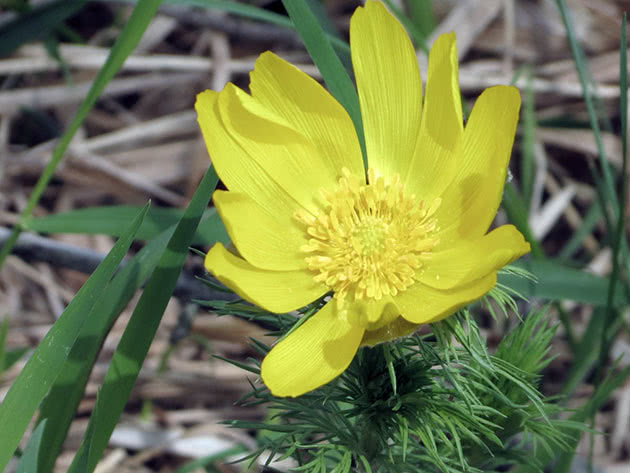 How to plant adonis

Planting of adonis flower is carried out at a distance of 10-11.8 inches between the seedlings. The depth of the hole should accommodate the root of the seedling vertically without its bending. After planting the seedlings are watered, and the planting site is mulched with peat. And do not expect adonis to flower this year. Adonis generally grows very slowly, and it reaches full development only in 4-5 years.

Caring for adonis in the garden

How to grow adonis

Growing of adonis requires frequent watering, and do not wait until the top layer of the soil gets dried out. When the crust forms on the ground, it is necessary to destroy it by loosening. From time to time, the bushes need to be earthed up, covering the buds of renewal, located at the base of the stems. Growing and caring for adonis also involve fertilizing of the plant as needed with a combined fertilizer: usually it is carried out before flowering and closer to the autumn. When flowers appear, do not cut them for at least two years, since it will take 2 years for adonis to form buds of renewal that should not be damaged. 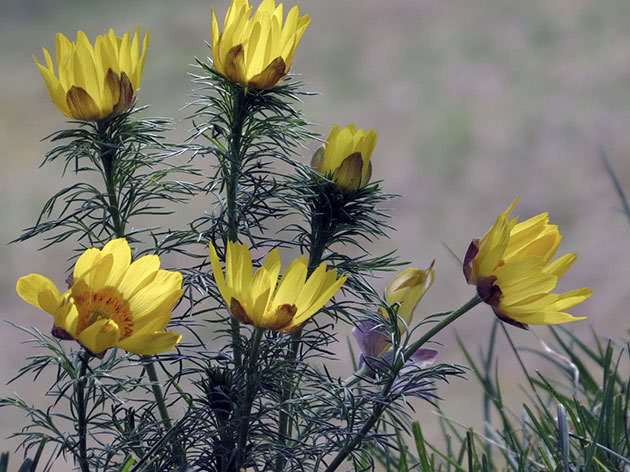 Adonis is propagated by seeds, and this method of reproduction has already been described, and by division of the bush. You can divide only the bushes that have reached 4-5 years, although if there is no need of this, then adonis can be transplanted once in 10 years – it can grow for 20 years in one place. Division of the bush is carried out in August or early September, although you can conduct the procedure in spring, before the beginning of vegetation. Carefully dig up the bush, cut the rhizome with a sharp knife so that each piece has a bud and roots. The slices are treated with a disinfectant, and then the cuttings are immediately planted. As adonis grow slowly, when dividing, try to get large parts – small pieces are sick for a long time and can not get established. Care of adonis after division should be carried out in the same way as for the young seedlings, but if flowers appear on the planted cuttings, they will be small, and it will be better to pinch them so that the rooting plant does not waste its energy on flowering. 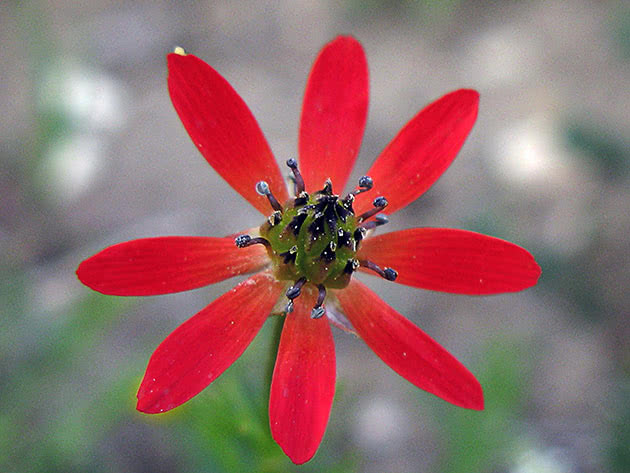 Diseases and pests of adonis

Poisonous adonis is not affected by insects and is not susceptible to common diseases.

How and when to collect the seeds of adonis

Seeds are harvested as soon as they start to fall off, and it is even better to collect slightly unripe seeds. Since there is no sense of storing seeds, they are immediately mixed with wet sand and sown in the ground.

Adonis plants are cold-resistant and hibernate without shelter, however young seedlings and the cuttings planted in autumn must be covered with peat and fir twigs. In a year, when they get stronger, before the onset of winter, there will be no need to worry for them. 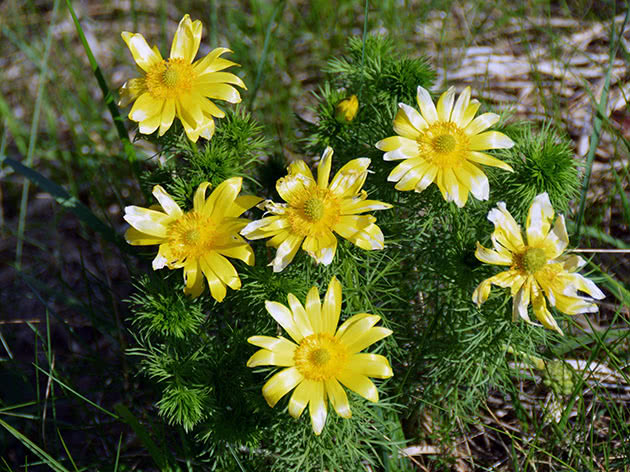 Varieties and species of adonis

Adonis species are divided into annual and perennial. Annual ones are:

or summer pheasant’s eye, can be found in the south of the European part of Russia, in Central Asia and in Western Europe. In England this species is called pheasant’s-eye. The stems are straight, simple or branched, bare, furrowed, 4-6 inches high. Upper leaves are sessile, lower leaves are on petioles, divided two or three times into narrow lobes. Flowers are single, 0.8-1.2 inches in diameter, perianth consists of red flat leaves with a dark spot in the center. This species blooms in summer, in June-August; 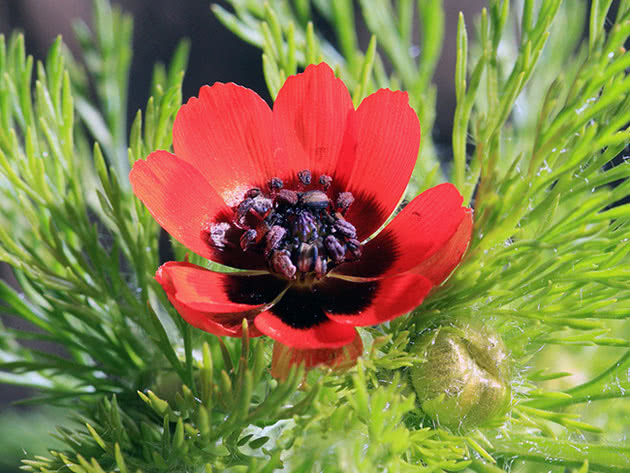 or blooddrops (Adonis automnalis), is native to the Mediterranean. This plant is up to 11.8 inches tall with thinly dissected alternate leaves and bright red or pale yellow flowers with a dark center up to 0.6 inch in diameter, with petals closed upward. It blooms at the same time as the summer adonis. It has been cultivated since 1596. 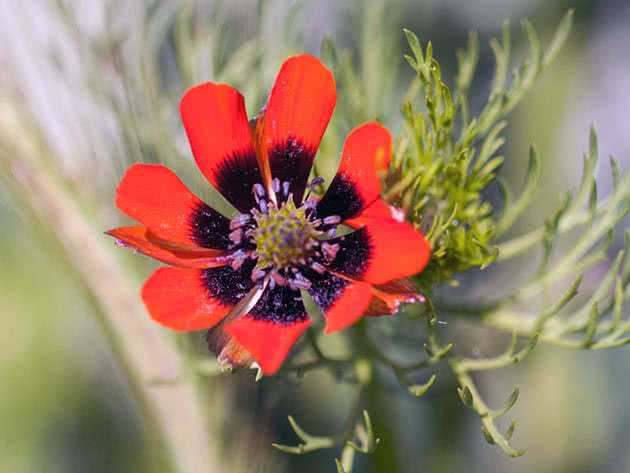 The perennial species of adonis are:

is a plant with thick, short brownish rhizomes, a few stalks up to 11.8 inches high that branch from the middle. The young stems and leaves are heavily pubescent, but after flowering the pubescence gets considerably thin. Leaf surface is palmatisected into linear-lanceolate lobes, wrapped downward at the edges. Flowers are of pale yellow color, pubescent sepals are purple; 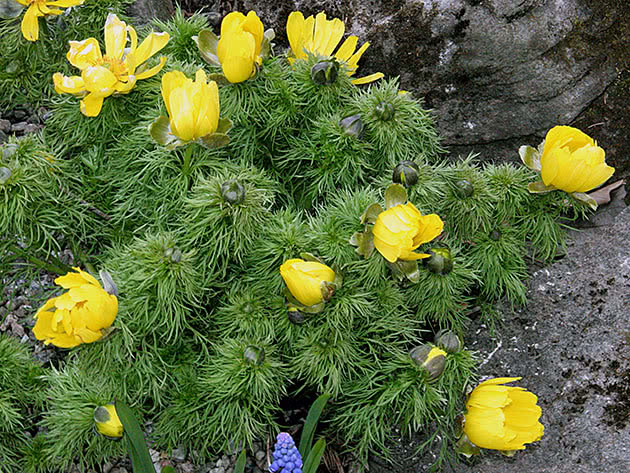 comes from the Far East, where it still grows in nature. In addition, it grows in Japan, the Northeast of China and the Korean peninsula. It is a forest species with pinnatisected petiolate leaves with a height of only 4.7 inches in the period of three-week flowering. Its flowers are widely open, golden-yellow, up to 2 inches in diameter, appearing earlier than leaves. When the leaves are opened, the height of the plant is about 13.7 inches. This species has been cultivated for a long time, it has many varieties, including double ones: 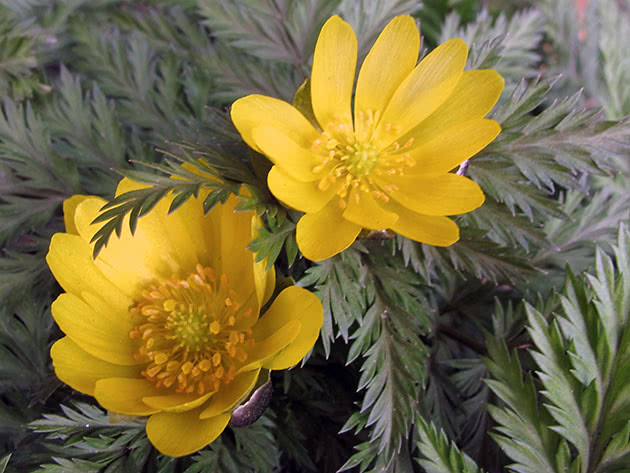 or Apennines adonis (Adonis apennina) grows in Mongolia, in the east of the European part of Russia, and also in Eastern and Western Siberia. The bush reaches 23.4 inches in height, the leaves of this species are pinnatipartive, flowers are bright yellow, up to 2.4 inches in diameter, open in May-June;

grows in Siberia and Kazakhstan in the flat steppes or birch groves. It has a short brown rhizome, single stems, densely pubescent at the beginning of flowering, up to 6 inches high, after flowering, when double-pinnate oval or broad-triangular leaves appear, the pubescence of the stems gets thinner, and they themselves elongate up to 11.8 inches. Adonis villosa has pale yellow flowers;

is one of the rarest species in Central Asia. It is a valuable ornamental and medicinal plant, found on the Tien Shan, in western Tibet and Kashmir. This species is included in the Red Book; 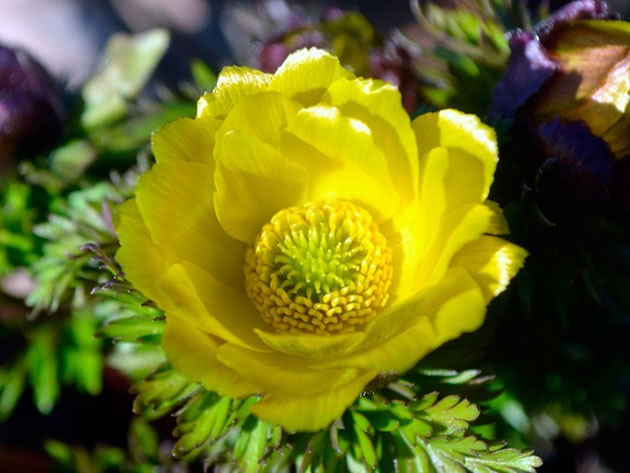 is an endemic of the Pamir-Alai, it is also a valuable medicinal plant. All ground parts of the plant are covered with curly hairs. Single flowers are 1.6-2.4 inches in diameter with yellow-orange petals from the inside and bluish petals outside. A specific feature of the species is that on one plant you can find ovaries, buds and blooming flowers;

is also endemic of Mongolia. Most often it grows on deserted pastures. It has numerous shoots – up to 11.8 inches on a bush, including shoots of the second and third orders. Middle leaves are sessile, basal leaves are reduced. Flowers are large, up to 2 inches in diameter. Light-green sepals with a purple hue are covered with small pile. The petals are white. Leaves get unfold only when the flowers are fully opened; 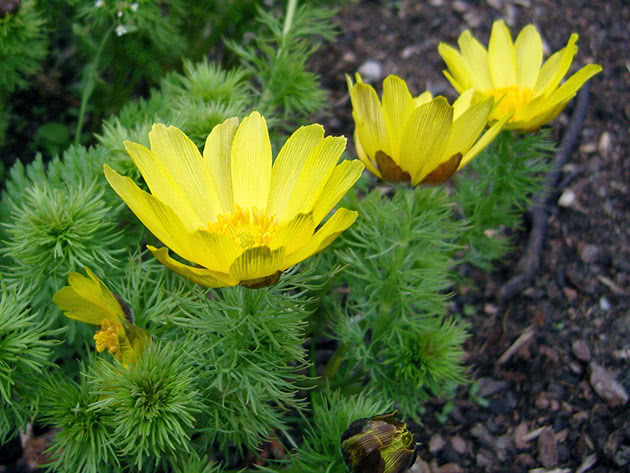 is a medicinal and ornamental plant, known since the XVI century. This species is widespread in the steppes of Central and Eastern Europe, in Western Siberia, in North-Eastern Kazakhstan, in the Crimea and in the Ciscaucasia. It has a thick, short, multi-headed rhizome, from which a multitude of ribbed branched stems grow, at the beginning of flowering reaching only 2-8 inches in height, but then growing to 16-24 inches. The lower part of the stems is covered with brown scales, in the axils of which the buds of renewal develop. Leaves of spring adonis are palmatipartite, with narrow lobes. Flowers with 12-20 shiny yellow petals reach 2.7 inches in diameter. Spring adonis blooms in 4-6 years of life in late April or early May, and its flowering lasts for two weeks.