Ragweed: plant-parasite: how to fight with, photo 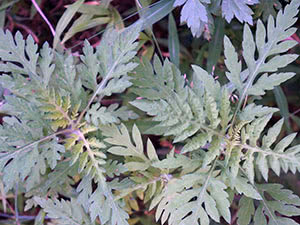 Ragweed (lat. Ambrosia) is a genus of perennial and annual herbaceous plants in the aster family that includes 50 species mostly growing in North America. In Eurasia, the ragweed flower appeared at the end of the 18th century: in 1873 it was brought from America together with clover seeds. In 1914, ragweed was cultivated in the village of Kudashevka, Ukraine, as a substitute for cinchona, and after the revolution it was scattered by the wheels of Studebakers throughout the country.
The ragweed plant is a quarantine weed. The scientific name of the genus comes from the mythological name of the food of the gods that confers immortality and youth. A fragrant ointment that the gods supposedly used was also called “ambrosia”.

What does ragweed look like? Ragweed reaches from 7.8 inches to 6.6 and even 9.8 ft in height. It has a core root penetrating to a depth of 13 ft, an upright pubescent stalk and beautiful lacy leaves that are up to 6-7 inches long and have dark green upper side and gray-green, strongly pubescent downside. Ragweed flowers are small, the flower color is various shades of green. When does ragweed bloom? The sprouts appear in May or June, and ragweed flowering begins at the end of July or early August and lasts until the middle of autumn. Ambrosia multiplies by seeds.

Ragweed grows very quickly. It drains the soil if growing with cultivated crops, and oppresses other plants, including meadow grasses. Ragweed reduces the fertility of the soil, soaking out mineral elements from it. The plants that are most affected by ragweed are sunflower, leguminous plants, cereal grains, tilled crops and buckwheat. The quality of feed crops contaminated with ragweed also gets worse: animals do not eat ragweed because of the high content of bitter essential oils in it. In addition, if it is taken in by cows, it worsens the smell and taste of milk.

Ragweed pollen can cause hay fever. This is one of the most dangerous weed-allergens. In the former Soviet Union and in the Crimea ragweed spread in the 60-70s of the last century, and at the beginning of the XXI century it already covered most part of Ukraine and the southwest of Russia. Lots of people suffer from allergy during the ragweed flowering, and the symptoms can be so severe that people have to fly away somewhere or take antihistamines for a long time. Allergy to ragweed is especially dangerous for children as it can lead to death. Ragweed pollen irritates the mucous membrane and makes breathing difficult. An allergic reaction occurs at a concentration of 25 grains of ragweed pollen per 11 ft² of the atmosphere, while one adult plant can release several million of such particles, and they can cover great distances with strong wind. 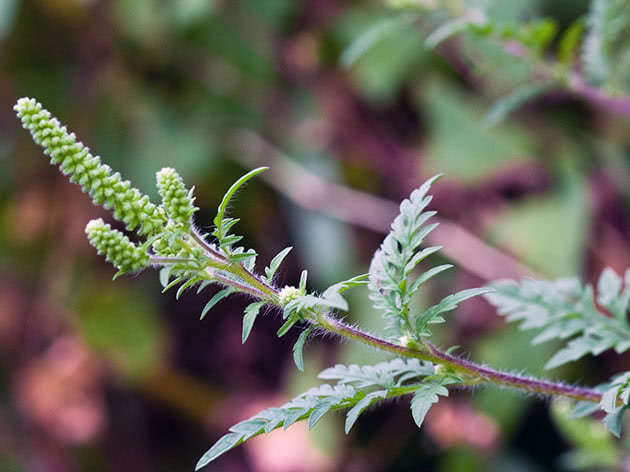 Symptoms of a reaction to ragweed blossom are a runny nose, reddening and itching of the eyes, tearing, itching of the skin, wheezing in the chest, coughing, tickling and sore throat. If a perfectly healthy person is forced to breathe air contaminated with ragweed pollens for several weeks, he will almost certainly turn into an allergic person. Unfortunately, such an allergy is practically incurable.

The people of other countries also suffer from ragweed: in the United States during the flowering period, 35 million people get sick. A merciless fight against the weed causing allergies was announced in Germany. In Switzerland, anyone who sees at least a ragweed sprout must immediately report this to a special service. But Hungary, Italy and France have already lost the battle with ragweed.

How to fight with ragweed

At home ragweed has more than 600 natural enemies holding back its growth. Among them there are both plants and insects. In all other climate zones that are favourable for this weed there is practically nothing that can reduce its spread. Ragweed can stand a long-lasting drought, it is extremely fertile: an adult plant produces up to 40,000 seeds, moreover ragweed seeds (mature and those that attained wax and milky ripeness) have good germination qualities. Ragweed seeds do not lose their germination capacity for up to 40 years.

If you find a ragweed bush near your home, destroy it until the plant has given seeds. A small amount of weeds can be simply removed, but if you are late, and the ragweed seeds are on the ground, you should get prepared for a hard, grueling struggle in which you will have to apply all available methods.. 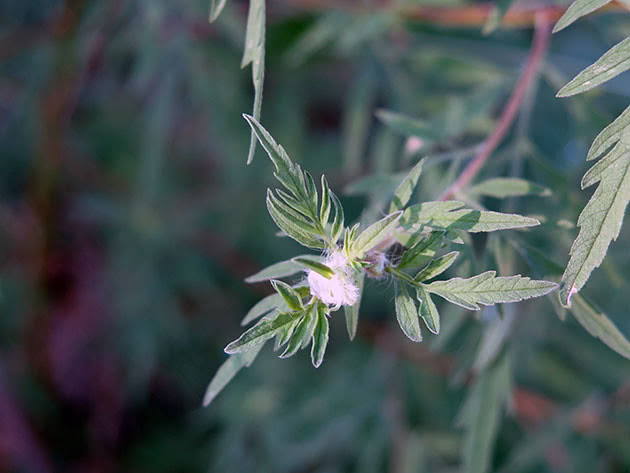 Mowing. This method of ragweed control is effective only during the formation of buds: if you mow down the weed during a period of active growth, it forms shoots 2-3 times more than you destroyed. Therefore, you will have to mow growing back ambrosia 3-5 times per season, not allowing it to bloom and give seeds.

Digging or uprooting. This way of ragweed control gives excellent results, but you will have to dig up the weeds for several years, as young sprouts will keep emerging on this site for a long time.

Chemical method. For larger areas you will need more effective means than hand pulling, and in this case you can apply glyphosate-based herbicides. The solution of plant killer is prepared strictly following the instructions, but keep in mind that the use of herbicides in the resort zone, pastures and urban areas is strictly prohibited.

Replacement by other plants. Experts recommend to fight with ragweed by its own weapon replacing the weed with lawn grass and perennial plants. In the hayfields and pastures, you can plant perennial cereals or legumes or plant them in mixed rows. In 2-3 years, such planting can completely suppress ragweed. The plants that are capable of reclaiming the weed area are alfalfa, foxtail, fescue, wheatgrass, sainfoin, awnless brome and cough grass. Brown mustard excellently clears the fields from ragweed. 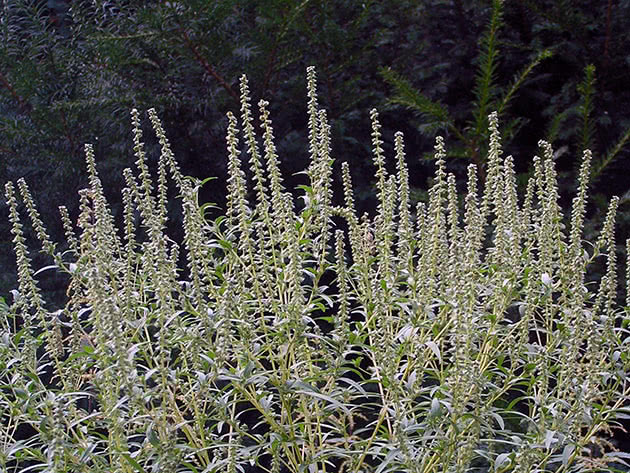 Use of natural enemies. In 1978 ragweed leaf beetle was brought from America to China, Yugoslavia and Australia with the specific purpose to control ragweed. It is a close relative of the Colorado beetle. This is a black beetle with longitudinal white stripes, eating not only ambrosia. Although the results are not impressive, the scientists do not lose heart: in the Rostov region (Russia) they began an experiment releasing 4,000 leaf beetles on the field of sunflowers.

The search for effective ways of ragweed control is still in process.

There are three species of ragweed: common ragweed, giant ragweed, and perennial ragweed.

is a large and strong early spring annual weed with branching stems up to 6.6 ft in height and broad leaves. Appearing in early spring, it quickly gets a rich foliage, displacing and drowning other annual plants, both cultured and wild. Giant ragweed quickly drains the soil. It blooms in the middle of June. 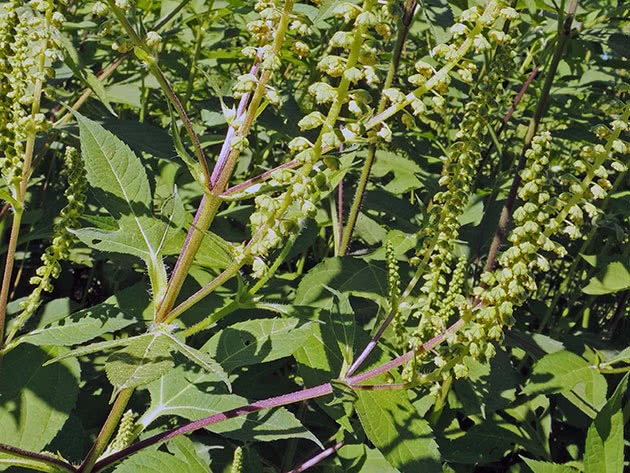 is also an annual plant that resembles wormwood. The plant reaches from 8 inches to 10 ft in height. The upper part of the stem is straight, paniculate-branched, covered with bristly hairs. The surface of the leaves are dark green, the underside is light green, both sides are covered with short bristles. The lower leaves are opposite, ovate, twice pinnately dissected with lanceolate lobes sitting on short petioles. The upper leaves are sessile, regular, pinnately divided or dissected. Common ragweed in bloom releases a large amount of harmful pollen. 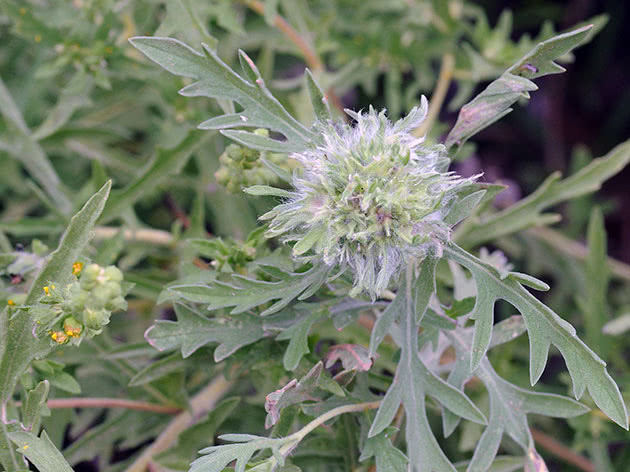