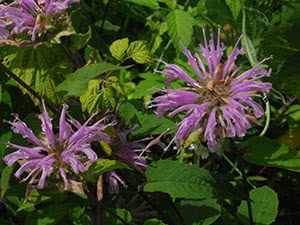 The monarda plant (lat. Monarda) is the genus of perennial and annual plants in the family Labiatae or Lamiaceae that includes about 20 species native to North America where they grow from Canada to Mexico. The monarda flower was named by Carl Linnaeus in honor of Nicholas Monardes, a Spanish doctor and botanist who wrote a book in 1574 describing American plants. In Europe monarda was grown for its essential oil, and by the 19th century it had been widely known as bergamot, horsemint or bee balm.

Monarda-bergamot is a perennial or annual rhizome plant with straight or branched stems up to 5 ft in height, with oblong-lanceolate upright dentate and mostly fragrant leaves, as well as with small, sweet-scented bilabiate flowers of white, purple, red, yellowish color, sometimes they can be even speckled, collected in dense head-like clusters or racemose inflorescences up to 2.4-2.8 inches in diameter that are oppositely arranged on the stem. Monarda fruit is a capsule with the seeds retaining their germination capacity for three years. Monarda can be grown on one site for 5-7 years. Monarda is characterized not only by attractive flower colors, but also by its amazing fragrance. It is used as a spice in cooking, it is added to tea, and it is a great honey-plant.

Growing of monarda from seeds

In warm climate zones monarda seeds are sown right into the open ground in February if the weather is fine, and during the next two cold months they go through a natural stratification process, and as a result, in April, strong shoots emerge and all that you need to do is to thin them out. If there is snow on the site, remove it, cover the area with a foil to warm the ground, then loosen the soil adding a little sand to the top soil layer and sow the seeds mixing them with sand in a proportion of 1: 4. The seeds are also slightly covered with sand. The depth of sowing should not be more than 1 inch. You can sow the monarda seeds in autumn, right after collecting the seeds, and in spring you need only to thin the shoots out, then in a year the grown up and strengthened bushes will bloom. Monarda shoots appear very slowly. 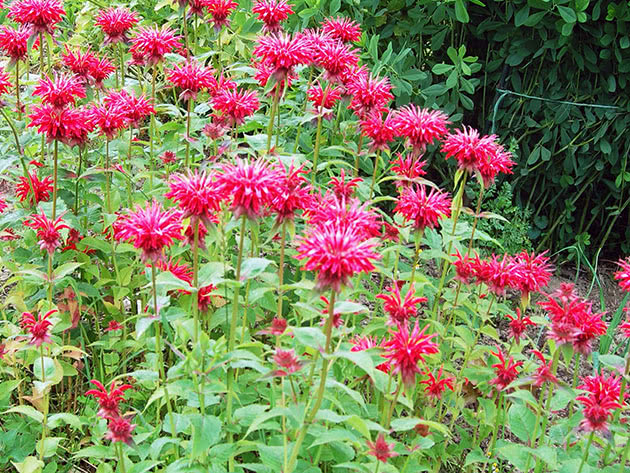 However, monarda is mostly grown by seedlings. In order to get the monarda seedlings by spring, it is sown in January or February in the boxes with the soil for vegetable crops at the depth of 0.8-1 inch, and placed in a greenhouse, keeping them under the foil and with the temperature of at least 68 ºF. Seedlings appear in three weeks, and in another three weeks the seedlings are pricked out into containers according to a 1.2x1.2 or 1.6x1.6 scheme to increase the feeding area for them.

When to plant monarda

It is easy to plant and care for monarda in the open ground. Monarda prefers to grow in the windless area with full sun, although it feels well in the partial shade. It is not picky to the soil, but it grows best in light, lime soils, and it develops slowly in raw and acidic soil. It is better to plant monarda in spring, but the site should get prepared in autumn: dig the soil up with removing weeds and adding 4.4-6.6 pounds of peat, manure or compost, 0.7-1 oz potassium salt, 1.4-1.7 oz of superphosphate and 1.4 oz of lime per 11 ft². In spring, before planting it out in the soil, you need to add 0.7-1 oz of nitrogen fertilizer per 11 ft². 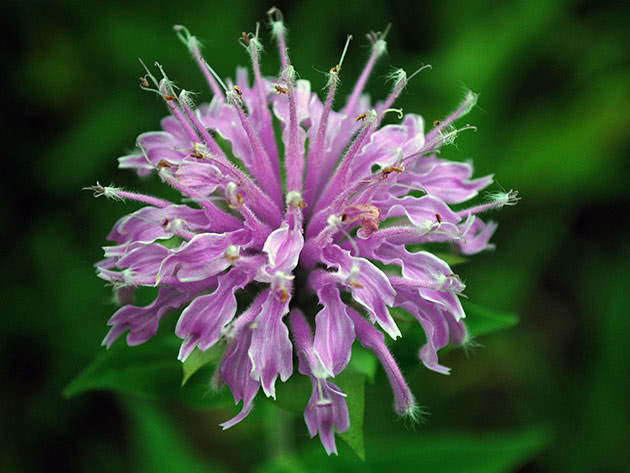 How to plant monarda

In two months after shoot emergence, when they form three pairs of leaves, the seedlings are planted out in the prepared area at a distance of not less than 24 inches from each other. Planting of monarda is followed by an abundant watering. Light spring frosts up to 23 ºF will not bother seedlings. Monarda grown from seeds usually starts blooming only in a year after planting, but if you plant seedlings, the strongest and most developed specimens can start blooming in a current year.

Care for monarda in the garden

How to care for monarda

Monarda needs frequent, but moderate watering, especially in the heat, otherwise the plant can get attacked by powdery mildew. In the hottest days monarda needs a daily watering. In addition, if summer is hot and arid, monarda should be covered with leaf humus or peat. You should regularly loosen the soil around monarda bushes and remove the weeds. Cultivation of monarda also implies using of fertilizers every two weeks from mid-May to early autumn. Monarda responds well to organic fertilizers, for example, to a mullein diluted in a 1:10 ratio. As a preventative measure in spring and autumn monarda should be processed with a fungicide or copper sulfate. 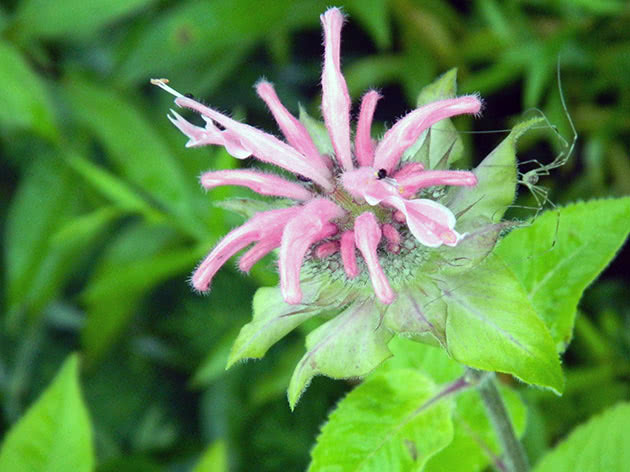 Since growing of monarda from seeds does not preserve varietal qualities, it is better and more reliable to propagate monarda by division of three-four-year-old bushes. You should do this in April, when soil gets warm, or in early autumn. The bush is dug out, the roots are cleaned from the soil with a stream of water, divided into approximately equal parts, the cuts are processed with crushed coal, and the sections are immersed in the prepared holes. Also you should know that you will have to divide the bush frequently since just in two or three years new plants will reach 3.3 ft in diameter.

Monarda is also propagated by means of cuttings 3-4 inches long that are sliced from green shoots before flowering. Lower leaves of the cuttings are removed, the upper ones are shortened by a third. Then the cuttings are planted in a box with moist coarse-grained river sand, the top is covered with garden fabric and placed in a dark place. Rooting occurs usually within two to three weeks. In the second half of summer the cuttings are planted out in a permanent place. 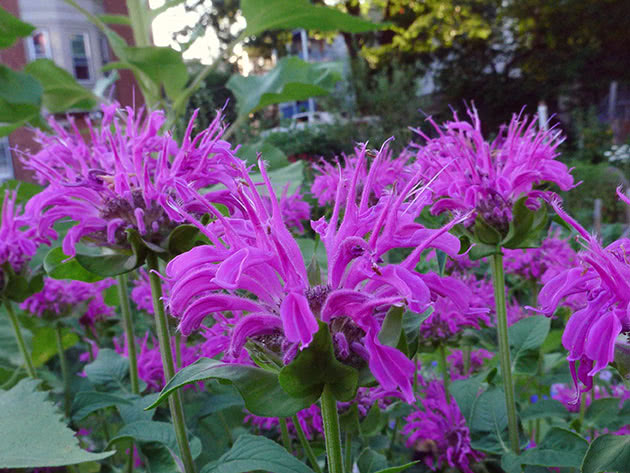 Pests and diseases of monarda

Monarda is not susceptible to diseases, but if there is a chronic lack of water, it can get infected with powdery mildew. To avoid this trouble you should observe the irrigation regime and necessarily mulch the soil on the site to retain moisture in the soil. Sometimes monarda can get attacked by tobacco mosaic virus or rust, a weevil can settle on it, but strong and well cared monarda has nothing to be afraid of as the monarda aroma and essential oils in its roots keep the pests away from the plant.

How and when to collect monarda seeds

Monarda seeds ripen in the capsules in late August or early September. If you want to do breeding, you should collect and sow them immediately or grow seedlings to plant them in the soil in the spring. And you can save the seeds in order to sow them in a year or two, since monarda seeds retain their germination qualities for 3 years if stored properly. You should keep in mind that when sowing monarda seed varietal qualities are not preserved, and to preserve them you should propagate the plant vegetatively.

If you do not need monarda seeds, leave the fruits on the bushes as in autumn they will be very useful for hungry birds. Remains of annual monarda are destroyed, and the site is prepared for a culture that will be grown next year. Perennial monarda is winter-hardy, it can withstand frosts up to -13 ºF, but if you think that winter will be cold and snowless, you should warm up the area with a thick layer of mulch or cover it with fir twigs.

Species and varieties of monarda

is the only annual plant in the genus with a height of 6 to 37 inches with lanceolate leaves and inflorescences consisting of 5-7 whorls with small light or dark lilac flowers. Leaves, flowers and stems contain essential oil with the same components as basil, melissa and mint have, and as a result lemon beebalm is used not only as decorative, but also as a spicy plant; 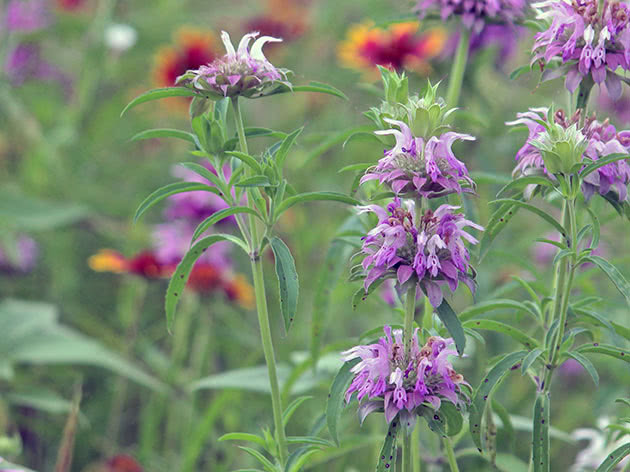 was bred in the Netherlands through crossing several species from the Citriodora group. Its young leaves have a strong lemon flavor as lemon beebalm has. 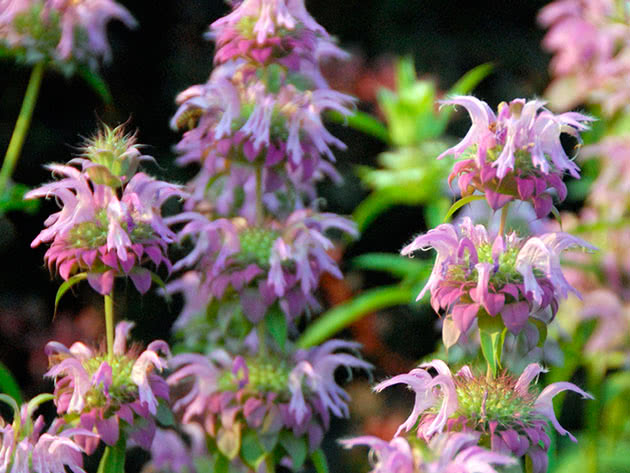 or horsemint is mostly grown not for its flowers but for its beautiful, bright, salmon-colored leaves that surround the inflorescence. The plant reaches 31.5 inches in height. 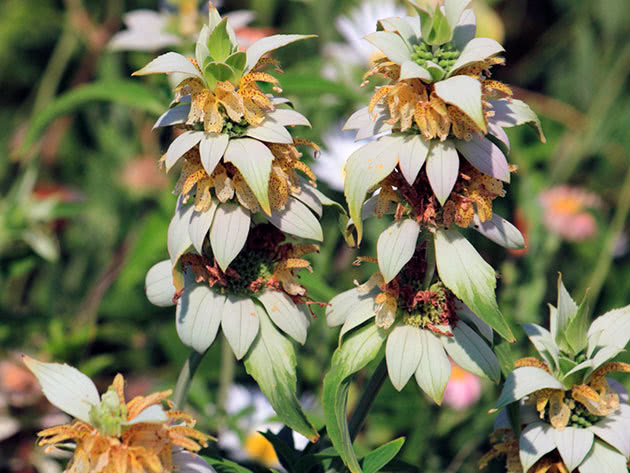 Perennial monarda is represented by such species:

grows in the Great Lakes region. It is a herbaceous perennial, reaching a height of 31.5 inches, with a horizontal expanding rhizome and tetrahedral leafy upright stems. Its leaves are opposite, short-petioled, oval, dentate, pointed at the tip, pubescent, green, up to 4.7 inches long, with reddish stipules. The flowers are small, purple or lilac, collected in dense terminal head inflorescences up to 2.4 inches in diameter. Large bracts have leaf form and almost the same color as the flowers. It has been cultivated since 1656. 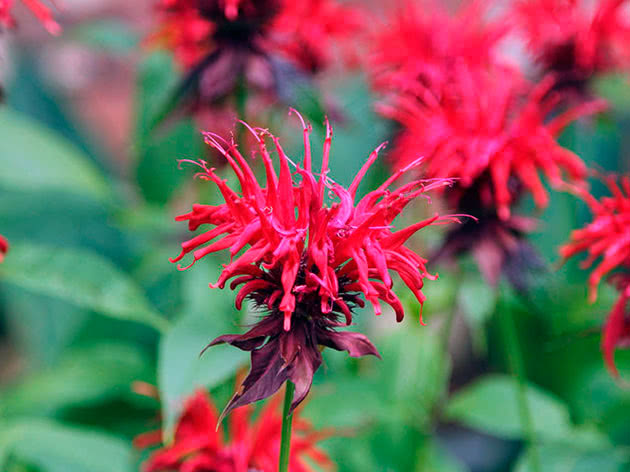 commonly grows in the forests of eastern North America, in Europe it is primarily grown as a spicy fragrant plant. It is a perennial plant with numerous stems reaching from 26 to 47 inches in height, with simple serrated leaves with thin hairs. The flowers of wild bergamot are lilac, small, joined in false whorls, surrounded with reddish stipules and collected in spherical head inflorescences. Each flower stalk has from five to nine inflorescences from 2 to 2.7 inches in diameter. It has been cultivated since 1637. There is a dwarf wild bergamot Victoria that was bred in Russia. 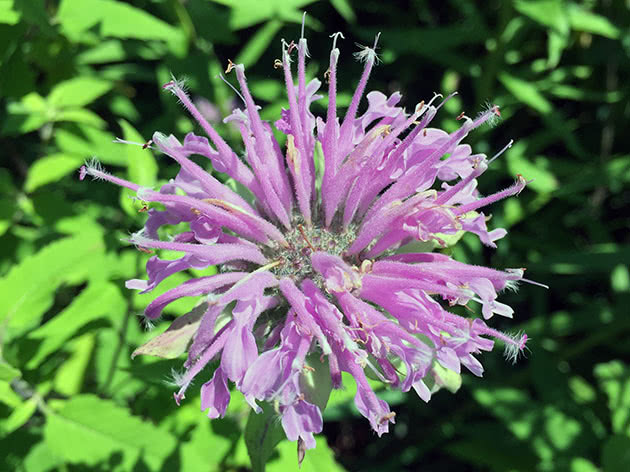 combines the forms and varieties bred in Germany, the United Kingdom and the United States through crossing crimson beebalm and wild bergamot. These plants are up to 40 inches in height with various flower colors, for example: 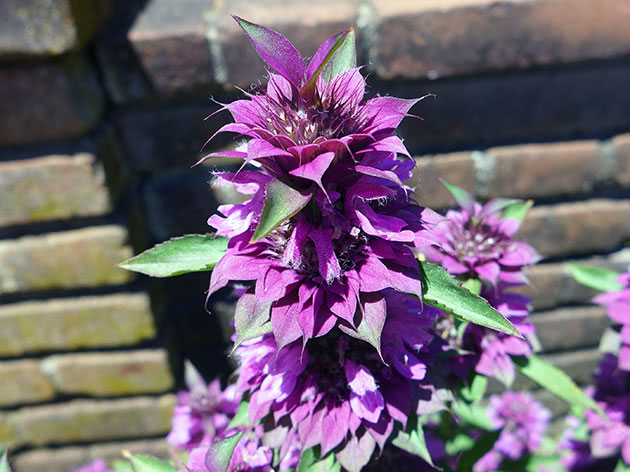 Monarda is rich in essential oils, vitamins C, B1 and B2 and other biologically active elements that make it popular in homeopathy. Monarda essential oils are the most valuable as they have the broad-spectrum bactericidal qualities, as well as reproductive, anti-stress, anti-anemic and antioxidant properties. Regular use of oil cleanses the aorta of atherosclerotic plaques, treats radiation sickness, flu and cold, strengthens the immune system and supports the organism after chemotherapy. Monarda is prescribed to treat otitis, cystitis, sinusitis, pneumonia and digestive disorders. Monarda helps with oral cavity diseases, headache, eliminates the foot and nail fungus. The plant is also in demand in cosmetology – it is a component of face creams for mature skin and skin-care products for oily and acne prone skin.

Not only is essential oil popular, but also its leaves that are added to tea, salads and soups. Monarda leaves are used as side dishes for fish and vegetable dishes.

Monarda is one of the most useful plants, but if overused, it can be harmful. Monarda is not recommended for pregnant and lactating women, children under 5 years of age, and monarda should not be taken in and used with aroma lamps.