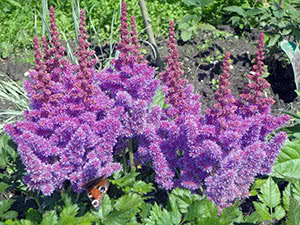 Astilbe is a representative of the genus of herbaceous perennials in the family of Saxifragaceae, and, according to different sources, it comprises from 18 to 40 species. “A” means “without”, “stilbe” means “brilliance”, that is, Lord Hamilton, a botanist from Scotland, when giving the name to the plant, referred to matte, dull astilbe leaves. Astilbe is native to East Asia, North America and the Japanese Islands. It grows in broad-leaved forests, along the banks of streams, in places where it is humid in summer.
Astilbe was brought to Europe from Japan at the end of the 18th or the beginning of the 19th century by the hunters for unusual plants Carl Peter Thunberg and Philipp Franz von Siebold, and since then it has been a favorite of all the shady gardens.

Astilbe is a rhizome plant, the aboveground part of which dies in winter. The stems of astilbe are upright, ranging from 3.1 inches to 6.6 ft in height depending on the species or variety. Leaves are long-petiolate and can be either simple, or twice or thrice pinnate, dentate. The color is dark green or reddish green. The rhizome of astilbe is woody, and depending on the species it can be loose or dense. Every year, new buds are formed on the upper part of the rhizome, the lower part gradually dies. The annual vertical increment is approximately 1.2-2 inches, so before winter the exposed rhizome should be covered with a fertile soil.

Astilbe flowers are the apical inflorescences consisting of small lacy flowers in shades of white, red, lilac, pink, purple and blooming in June-July-August. Inflorescences are paniculate, rhombic and pyramidal. Species with drooping inflorescences are very spectacular. The fruit of astilbe is a capsule. According to the flowering time astilbe can be early (late June-early July), medium (July), and late (August).

In cultivation 10-12 plant species are used. Many new hybrids were obtained through breeding. Today the number of varieties has reached two hundred. The most popular hybrid groups are Arendsii hybrids (Arendsii Hybrida), Japanese hybrids (Japonica Hybrida), Chinensis astilbe (Astilbe Chinensis) and its types, and astilbe simplicifolia. 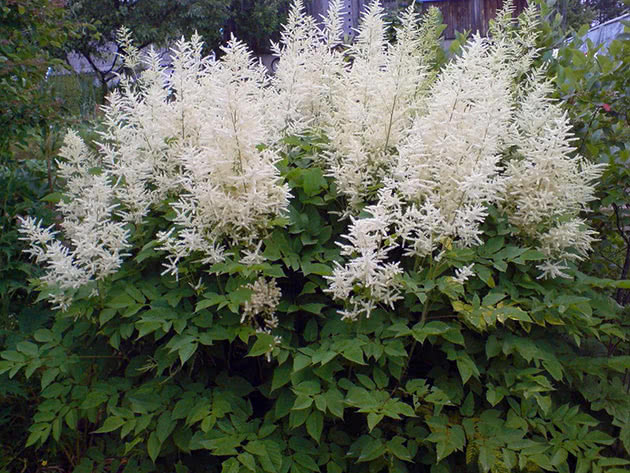 is represented by forty varieties that are the result of crossing the base species (David’s astilbe) with other species. These are vigorous, spreading, tall shrubs (up to 3.3 ft), of globular or pyramidal shape with dark green leaves and terminal inflorescences of white, lilac, red and pink flowers. It blooms longer than other species, for 30-40 days from July to August. It has been cultivated since 1907, but the best varieties were created by G. Arends. The popular varieties are Gloria astilbe, Diamond, Weisse Gloria, Rubin, Glut and others. Amethyst, Weisse Gloria and Ruby reach 2.6 ft height, Diamond is 2.9 ft high. But while Diamond, Glut and Rubin have paniculate inflorescences, Gloria and Weisse Gloria have diamond-shaped inflorescences. 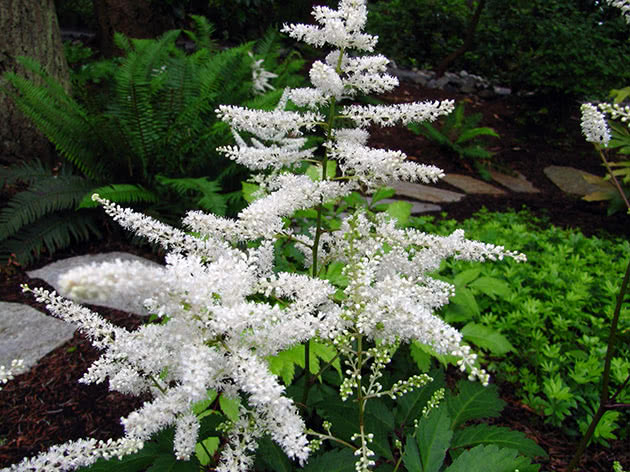 is a plant up to 3.3- 3.6 ft high. The basal leaves are large, long-petioled. The stem leaves are smaller, with short petioles, shiny and lacy. Inflorescences are dense, 12-13.7 inches in length. Flowers are small, usually lilac, but there are varieties with pink and white flowers. It has been cultivated by flower growers since 1859, and it has dwarf varieties from 6 to 10 inches in height (var. pumila hort.) and varieties with cone-shaped inflorescences (var. Taquetii). This species of astilbe perfectly grow in areas with full sun. The most beautiful Chinese astilbe varieties are astilbe chinensis taquetii “Purpurlanze” of incredible lilac color, pink astilbe chinensis “Vision in Pink”, astilbe chinensis (Pumila Hybrida) “Vision in Red” of dark purple color. 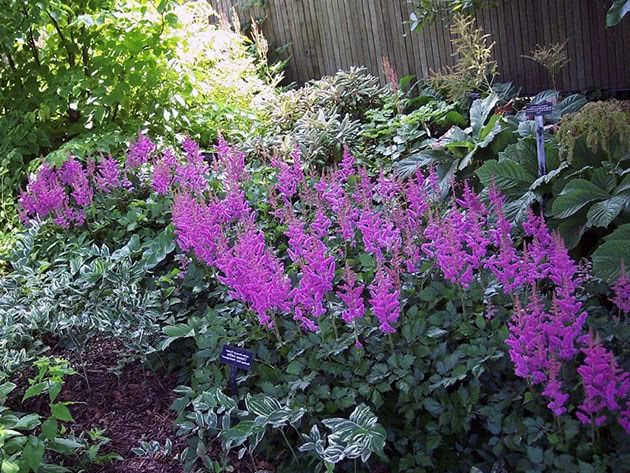 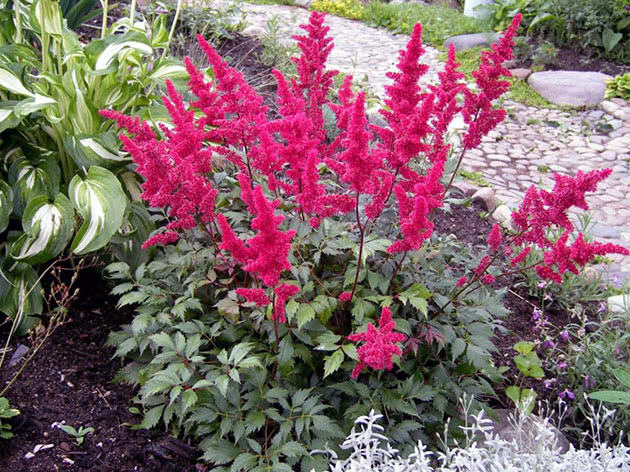 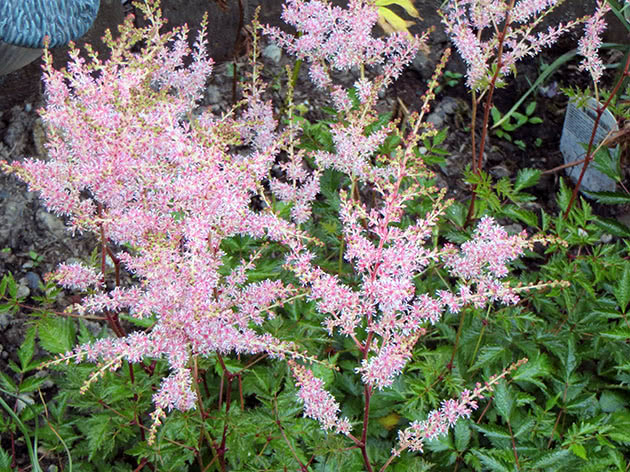 Growing of astilbe from seeds

Astilbe is propagated vegetatively (bush division and separation of the rhizome with the buds) and by seeds. And although inexperienced plant growers prefer vegetative methods, we will tell you how to grow astilbe from seeds, because it is the seed propagation method that allows breeding and obtaining new varieties. Astilbe seeds are sown in March: a mixture of peat and sand (1: 1) is placed in a 6 inch tall and wide container, and covered with 0.4 inch snow (in snowless winter it is possible to get snow in a freezer), on which seeds are scattered. When melting and moistening the soil, snow immerses the seeds into the ground. After snow has melted, cover the container with a transparent bag and place it in the refrigerate for twenty days (this is called stratification) before the shoots emerge, and then transfer it to a light warm (64-72 ° F) place. Be careful with watering, otherwise you will kill seedlings: water under the root or inject water into the soil by syringe. When the seedlings have 2-3 leaves, they are pricked out into small pots to plant them in the ground. We will describe in the next section how to plant astilbe grown from seedlings. 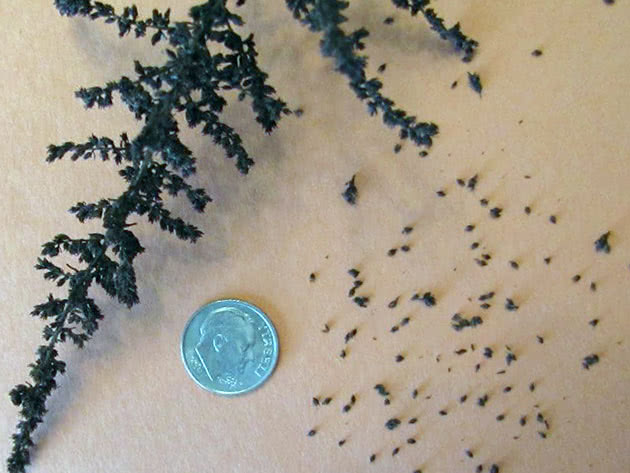 Growing and caring for astilbe are easy, so let's start with the main thing: planting of astilbe occurs in May-June, choosing the northern side of the house, in the shade of trees or bushes, although some varieties can adapt to a more sunny place and in this case the blossoms will be more vibrant but not so long-lasting. If there is a fountain or a swimming pool next to it, it will be great. It prefers loamy soil with a high groundwater table. Optimal acidity is 5.5-6.5 pH. In the garden astilbe is a perfect companion plant for hostas: the leaves of the hostas retain the moisture in the soil and prevent it from overheating in the heat. 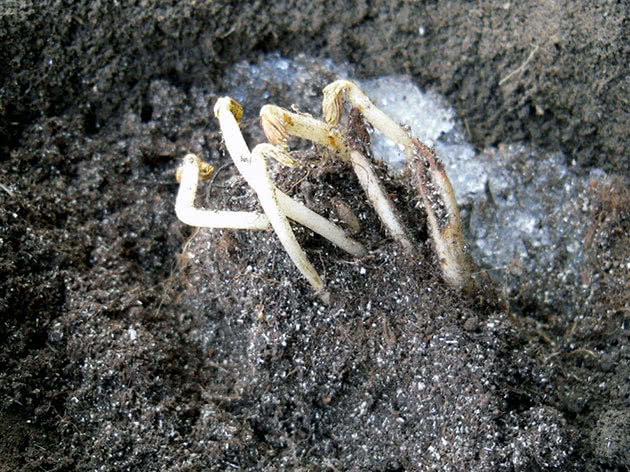 Planting of astilbe in spring is preceded by digging up the site and removing rhizomes of weeds and other plants, then you need to amend the soil with compost, well-rotted manure or rotted peat at the rate of 2 buckets of fertilizer per 11 ft2. Before planting of astilbe, prepare the planting holes that should be 8 inches deep and 12 inches wide at a distance of 12 inches from each other and fill each of them with a half of a glass of ashes and 1 tablespoon of mineral fertilizer, then water them well. Place the seedlings, or rather, the root of astilbe, in the hole so that the soil layer is at least 1.6-2 inches above the buds of growth. Fill the holes with soil, compact it and mulch the area with a 1.2-2 inch layer of humus or peat.

The main feature of astilbe is that the rhizomes work their way to the top of the soil and the older rhizomes gradually die back. That is, over time, the root system turns out to be without resources, therefore, earthing up is especially significant for astilbe. Do not let the soil dry up: timely watering is one of the mandatory rules of caring for astilbe. In addition, mulching will protect not only the root system from overheating, but also retain the soil moisture and get rid of weeds without the need of often soil loosening. Astilbe requires from average to heavy watering, depending on the species and variety, but all varieties need regular and plentiful watering during the formation of inflorescences. In a severe drought, water astilbe twice a day – early in the morning and in the evening. 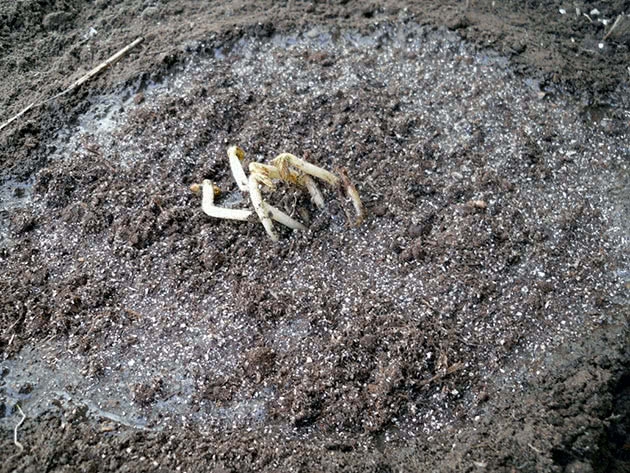 Without being transplanted, astilbe can grow for 5-7 years, but if cared well and with fertilizers applied on time, it can grow in the same place for up to twenty years. In spring astilbe is fed with nitrogen fertilizers (humus is added when earthing up), in mid-June you should use potash fertilizers (2 tablespoons of potassium nitrate per 2.2 gallons of water, 17.6 fl oz of solution per bush), and before flowering you should apply phosphoric fertilizers (0.7 oz of superphosphate per bush). After fertilizing, the soil is loosened and mulched again. 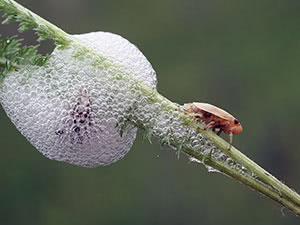 Astilbe, like many other alien plants, left its “enemies” in the place of origin. In cold climate zones it is sometimes attacked by meadow spittlebugs and two kinds of nematodes – strawberry crimp nematode and root-knot nematode. Meadow spittlebug settles in the axils of the leaves and forms foamy salivary secretions, inside of which there are larvae-leafhoppers. The more meadow spittlebugs there are, the more leaves wrinkle and get covered with yellow spots. As a result, the plant withers partially or completely. To get rid of meadow spittlebug you should treat the plants with insecticides or malathion.

Strawberry crimp nematode is a leaf pest, it parasitizes on the buds, leaves and flowers, making them deformed and covered with yellow or brown necrotic spots. The growth of plants is slowed down. The root knot nematode affects the roots, forming small root-knot galls that contain nematodes. Galls become clearly visible in the second term of vegetation. Infected plants develop and bloom poorly, sometimes they even die. It is necessary to detect the plants with obvious signs of infection in time and remove them. In addition, keep watch on weeds in the first half of the vegetation and immediately remove them. In the second half, when growing out, the roots of the astilbe choke up the weeds, and weeding will not be necessary. The plants in the site should be processed with an insecticide. 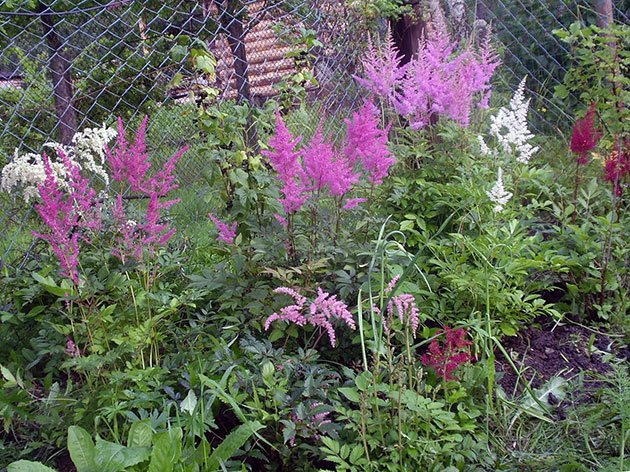 When astilbe is done with blooming and the flower stalks begin to dry up, do not cut them off at once, since even half-dry spectacular inflorescences of astilbe will adorn your garden. But at the end of the season, when you have to put things in order on the flower beds before winter, the stems of astilbe should be cut off at the ground level, and the area should be covered up. Covering is especially important for the astilbe grown from the rhizome division. This is done in order to rejuvenate astilbe, since when the root gets woody, it will be difficult to separate them. Therefore, in early autumn, the rhizomes are divided so that each section has a growth bud, then the next year, as a rule, the transplanted astilbe will start blooming. 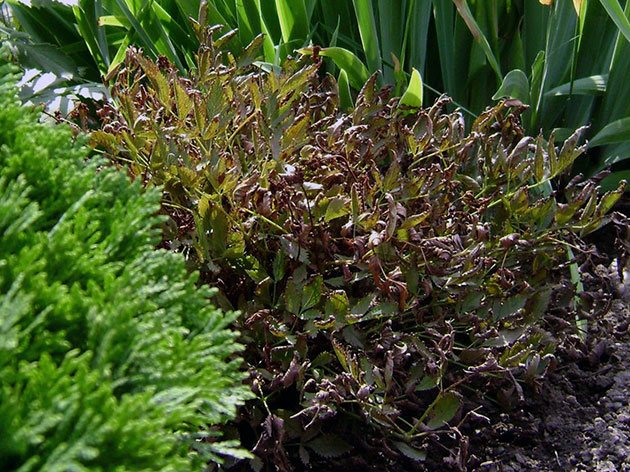 You just need to mulch the site, and it will be great to place the fir twigs over newly transplanted rhizomes to protect new plants from winter frost and be sure that in spring astilbe will not die from a sharp temperature drop.