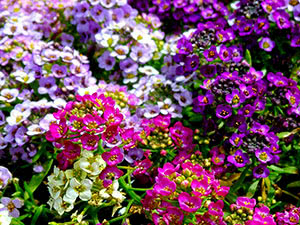 Alyssum plant (lat. Alyssum), or alison, or sweet alyssum, belongs to the family Brassicaceae (it was formerly included in the family Cruciferae) and comprises about 100 plant species that grow in North Africa, Asia and Europe. The word “alyssum” is the Latinization of the Greek word “alisson”: “a” means "without" (a denial), “lyssa” means “dog rabies”. That is, in ancient times the alyssum flowers were somehow used in the treatment of rabies. In the garden culture the alyssum flower became known not so long ago, but its popularity is growing every year, and the reason for this, besides the simplicity in the care, is the strong honey aroma that the plant exudes.

Alyssum is a low-growing, ground-covering plant, reaching a height of 6 to 16 inches. There are small pubescent oblong or obovate leaves at the base of heavily branching semi-woody shoots. Flowers are small, white, yellow, lilac, pink, red or purple, collected in small trusses, bloom in May till autumn. The fruit is a pod with seeds that retain their germination capacity for three years. Alyssum is a honey plant attracting bees with its spicy honey aroma. Strictly speaking, sweet alyssum and alyssum are not the same plant, but they are close relatives and so much alike that the florists unite them in one genus for simplicity. The difference is simple: alyssum has pale yellow or yellow flowers, and sweet alyssum has white, lilac or pink flowers.

Both annual and perennial alyssums are cultivated. The plant is grown for decorating garden and flower beds, and also it can be grown in the pots. Often, it is planted to hide the places that are left empty after the end of blooming of spring bulbous plants.

Growing of alyssum from seeds

If you do not know how to grow alyssum from seeds, we are ready to share our experience with you. Growing of alyssum by the seed method assumes two ways – seedling and non-seedling. How to plant the seeds of alyssum by a non-seedling way? Sowing of alyssum in the soil is carried out at the beginning of May at a depth of 0.6 inch, and when the seedlings appear in clumps, they are thinned out. But in the case of spring sowing, alyssum will bloom late. You can sow seeds in November – during winter they will endure a natural stratification, and in spring you will get sturdy healthy shoots that will bloom in time. 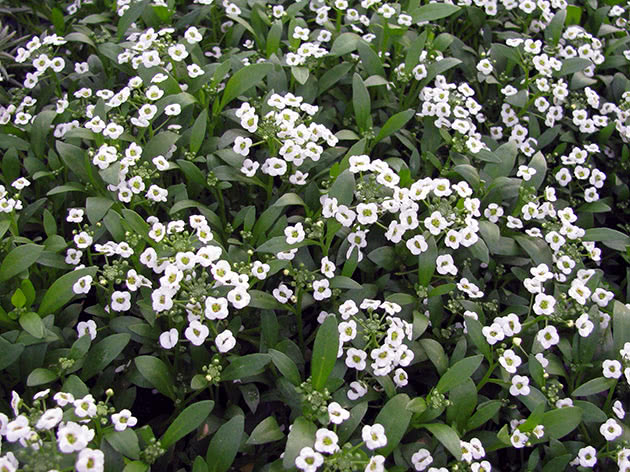 But still many growers prefer a seedling method of propagation, and with good reason – it is safer and rarely ends with an unpleasant surprise. Before sowing of alyssum to get seedlings in March-April, you should buy a light substrate with a low lime content (pH 5.5-6.2) and place it in a seedling box, then sow the seeds not too thickly and lightly sprinkle them with the same substrate, although it is not obligatory as you can just press the seeds into the surface. If you create a good lighting for seedlings, hothouse conditions by covering them with glass or foil, arrange temperature regime within 50-59 ºF with moderate moistening and airing, the seed germination can be expected in a week or even earlier. Once the first true leaf appears on the shoots, feed the seedlings them with a combined fertilizer. Before pricking out seedlings into individual pots, wait for 2-3 true leaves to appear, although if the shoots grow quickly, pricking of alyssum may not be needed and the seedlings can be planted directly into the ground. 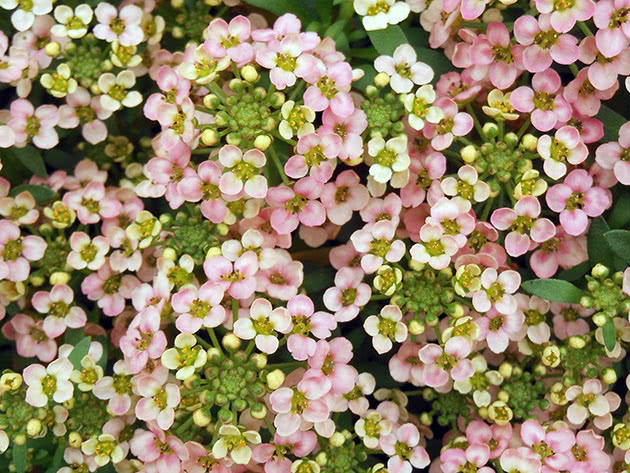 Planting of alyssum in the open ground

When to plant alyssum

Planting of alyssum flowers in the open ground is carried out in late May or early June after the date of the last frosts. The site should be full of sun. Alyssum prefers a dry, well drained, rich in humus, neutral soil, although both slightly alkaline and weakly acidic substrates are suitable. Alyssum perfectly grows between sun-heated slabs or stones. 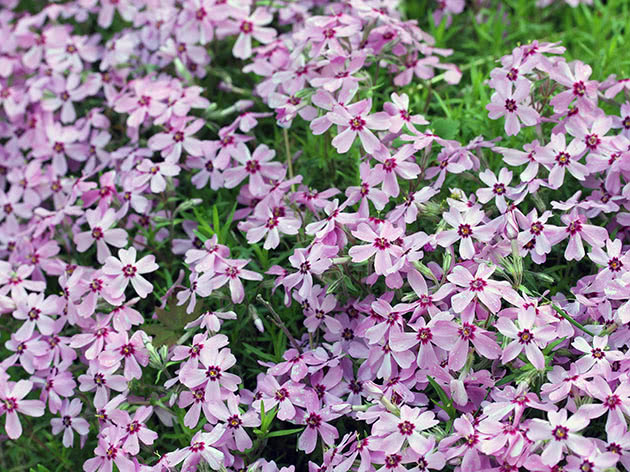 How to plant alyssum

Planting of alyssum in the open ground is carried out with taking into account the fact that these flowers grow rapidly in breadth, that is, they need to be planted at a distance of about 16 inches from each other, although everything depends on the species and variety of alyssum. Planting holes should be slightly larger than the rhizome with the soil clod, and when being planted alyssum should not be buried deeply, and immediately after planting the flower is heavily watered. When planting on the flower bed, big clumps of alyssum bushes can be divided and planted separately. Alyssum grown from seeds blooms in 6-7 weeks after appearance of the shoots. 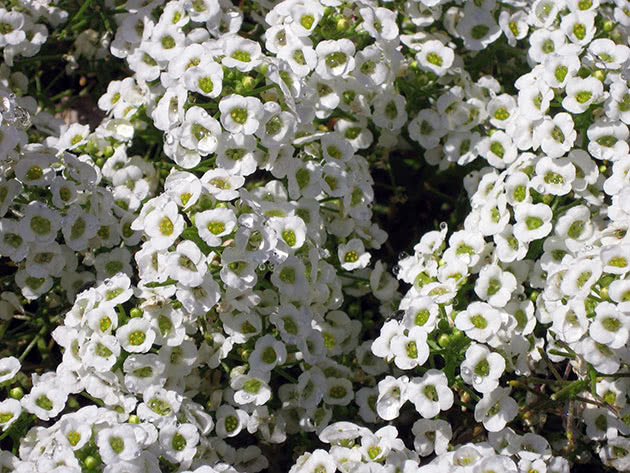 How to grow alyssum

As you can see, planting of alyssum is simple and quick. And it is very easy to care for the plant. All it needs is watering, loosening of the soil, weeding, pruning and fertilizing. The plant requires a regular watering, and in the arid season it should be abundant, otherwise the lack of moisture makes the plant drop the flowers and buds. But abundant watering is possible only with good water permeability of the soil, otherwise the stagnation of moisture causes root rotiting and as a result the plant dies. How to know that it is time to water alyssum? Dig a hole 1.2-1.6 inches deep by a shovel, and if the soil is dry, you should heavily water it. After watering, you can easily remove the weeds and loosen the soil between the bushes of alyssum, but if in spring after planting you have mulched the site, then watering and weeding will be much rarer, but loosening will still be an important part of care for alyssum as it provides water and air permeability of soil. With regard to fertilizers, during the period of foliage growth perennial alyssum is fed with nitrogen fertilizer at a rate of one tablespoon of the fertilizer and carbamide per 2.2 gallons of water, and before flowering add a combined fertilizer into the soil. Annual species need more frequent feeding – about four times per season, provided that the first time fertilizers are applied before flowering. If fertilized with the right frequency and in sufficient amount, annual alyssum will please you with a long-lasting and abundant flowering. 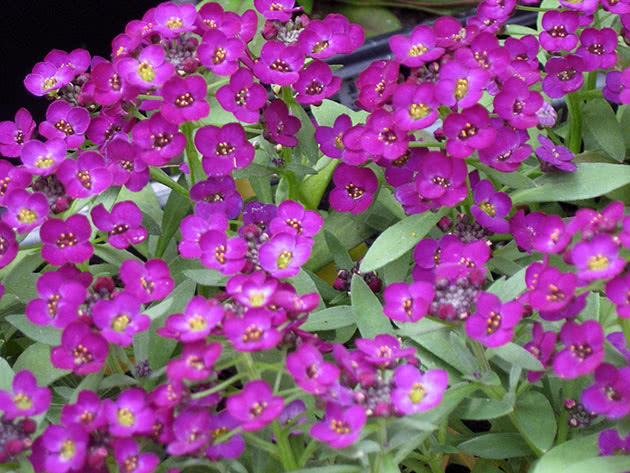 Timely and correct pruning is very important for proper growth and abundant flowering of alyssum. In spring you should remove last year's peduncles, dried leaves and weak, diseased shoots from the perennial alyssum. After summer flowering, repeat the same pruning, and also shorten all shoots of the plant by 2-3 inches, and this will promote further flowering of alyssum. In addition, overgrown shrubs look a little sloppy, and pruning will give them a compact and well-groomed shape. 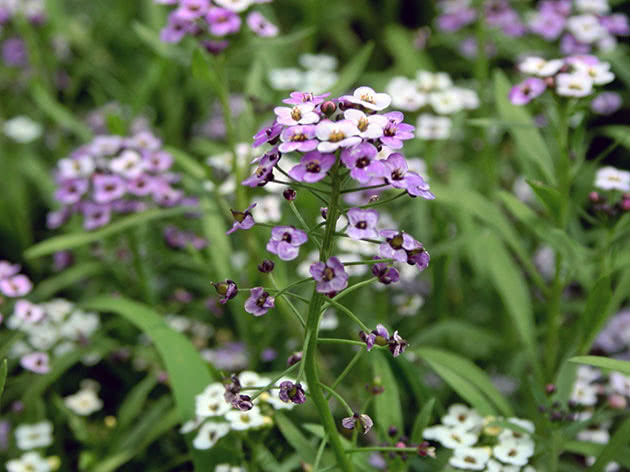 Pests and diseases of alyssum

The most dangerous pest for alyssum is the crucifer flea beetle that is difficult to control unless you process the plant with a solution of one tablespoon of acetic essence per 2.2 gallons of water, but only adult, strong plants can be treated. Caterpillars are also dangerous for alyssum, and they can be removed by processing the plant with the infusion of chamomile or tobacco with soap. Diamond-back moths and white butterflies that also damage alyssum can be destroyed by an insecticide. 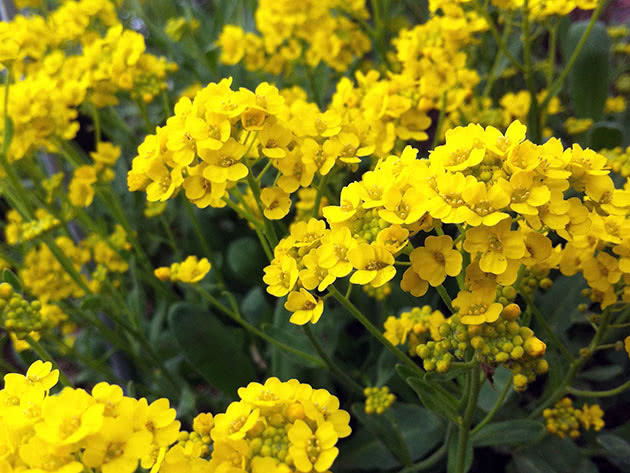 In case of constant waterlogging or insufficient water permeability of the soil, alyssum can get brown rot, or late blight disease that affects the underground parts and the root neck of the plant. To get rid of this disease you should treat the plant with copper chloride or a fungicide. Alyssum also can get infected with variegation or powdery mildew (real or false). Powdery mildew is controlled with Bordeaux mixture. A false powdery mildew is treated by a fungicide and Bordeaux mixture. Variegation is not cured. 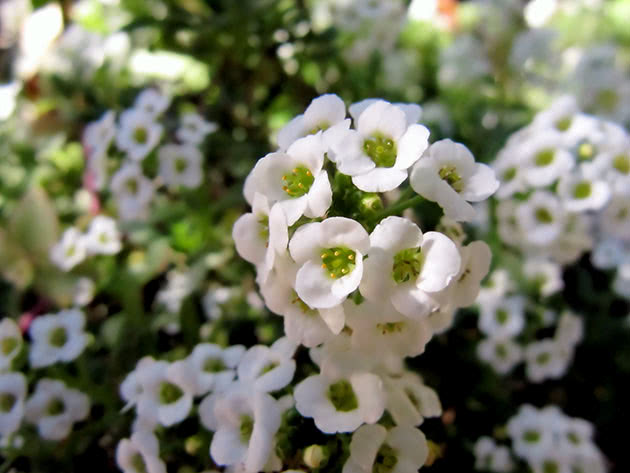 How and when to collect the seeds of alyssum

You can start collecting seeds in late September or early October. To do this, in a dry, windless day, spread out the old blanket in the courtyard and grind the inflorescence of alyssum over it. Thus the large particles will be removed, and the small ones will not bother you. Dry out the seeds in a dry room with good ventilation, but without drafts and store them in a tissue bag until spring. If you get late and alyssum sheds the seeds, take a broom and sweep the seeds that are on the ground under the bushes lifting the branches of alyssum, remove debris and soil and store the seeds as described above. 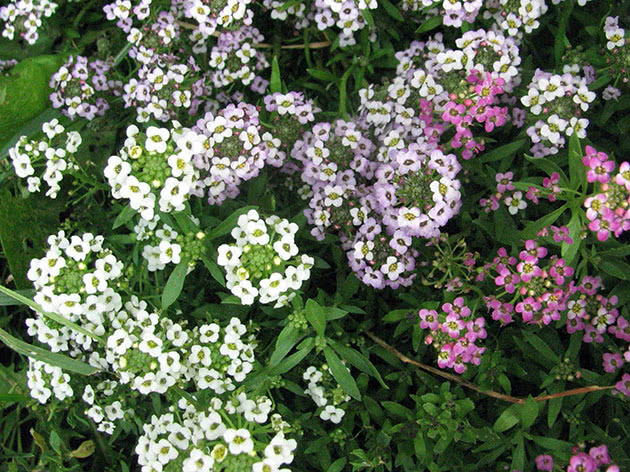 It must be said that even frost-resistant alyssum can not tolerate the temperature below 5 ºF and the plant will not survive. But if winters in your area are not so cold, cover the plant with dry foliage, and when the snow falls, make a snowdrift over alyssum, and the plant will safely overwinter keeping the green leaves on the bushes. Pruning of alyssum before winter is not recommended as pruning after the flowering will be enough, especially since in spring alyssum will get trimmed once more.

Species and varieties of alyssum

is a heavily branched perennial plant up to 12 inches high, forming hemispherical bushes up to 16 inches in diameter. Its branched stems are lignified at the base. Obovate or oblong gray, like felt, leaves, remaining on the bush even in winter, form dense rosettes. Small yellow flowers with daedalous petals are collected in dense, short trusses. It blooms for about forty days in spring, the second flowering is possible at the end of summer. The varieties are: 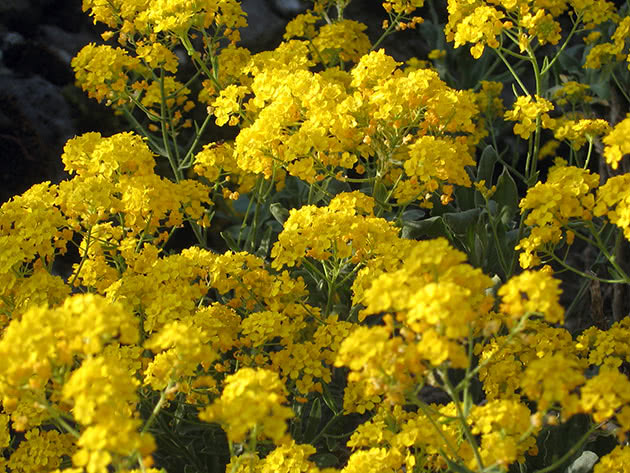 or sweet alison, is a perennial plant, but only if grown in a warm climate, the height is 3 to 16 inches, with heavily overgrown and creeping branches, forming fluffy bushes with small, fleshy, silvery oval leaves with fine pubescence. The flowers are also small, honey-smelling, collected in trusses. In nature, there are varieties of white or lilac color, but in culture there are many varieties with pink, purple and red flowers, blooming from spring to autumn. The varieties are: 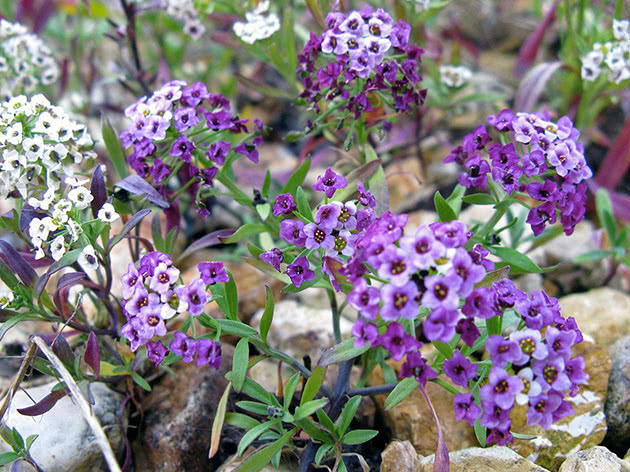 is a frost-resistant perennial plant, 4-8 inches high with ascending and creeping stems, the leaves are densely covered with star-shaped hair that makes them look gray. The flowers are yellow, collected in trusses. It blooms in April or May.

In addition to the above-mentioned species, there are also such representatives of the genus of alyssum as alyssum lenense, alyssum tortuosum, alyssum savranicum, alyssum hirsutum, alyssum calycinum, alyssum pyrenaicum, alyssum repens and alyssum argenteum. 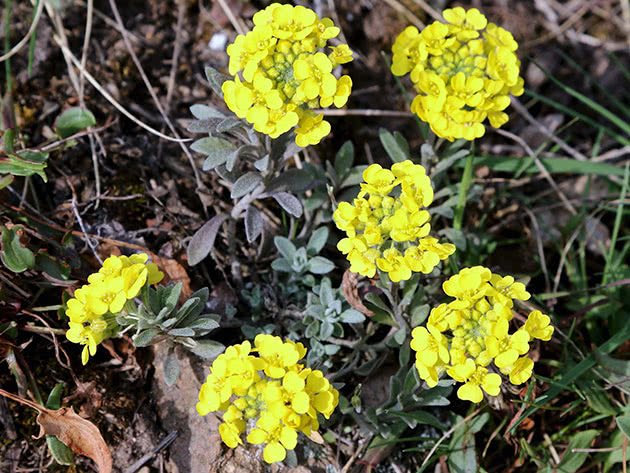 In recent years, as the popularity of alyssum is growing, the breeders have created new remarkable varieties the most popular of which are: