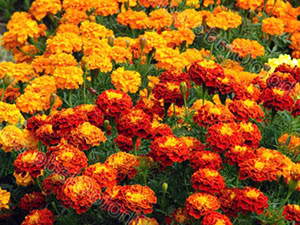 Marigold (lat. Tagetes) is a genus of perennial and annual plants belonging to the family of Asteraceae or Compositae. This plant is native to South and Central America. They have long been used in the rituals of local Indian tribes, as well as for treatment of various diseases. In Europe marigolds were brought in the 16th century and were the first overseas flowers in Russia. The marigold flower was named by Karl Linnaeus in honor of Tagez, the Etruscan demigod, the grandson of Jupiter, famous for his beauty and gift of the soothsayer.

Today, marigolds have about 40 species and are cultivated in many countries of the world. 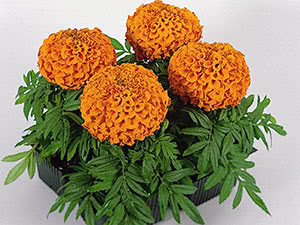 The stems of marigolds are erect or branched, forming a shrub with a height of 7.8 to 51 inches. The root system is fibrous, the leaves are pinnately divided or pinnatisected, opposite or alternating, the color of the leaves varies from light to dark green. Floral head is of different shades of yellow, brown and orange colors. Disc florets are tubular, bisexual; ray florets are false semi-floret. Marigolds bloom very abundantly from June till the first frosts. The fruit is a linear achene. Seeds of marigolds are able to self-seeding and retain their germinating capacity for 3-4 years. Strong spicy smell is produced not by flowers but by the leaves of marigolds.

The marigold flower bed is an invaluable home first-aid kit: modern scientific research has confirmed the healing properties of marigolds, known from legends, so growing of marigolds provides not only aesthetic pleasure, but also real benefits to human health. They contain lutein, for example, that reduces the chance of cataract growth. Also, in traditional medicine marigolds are used to treat diabetes mellitus and pancreatic inflammation. Medical marigolds that are dried and then infused treat stomatitis, bronchitis, asthma, cold, and purify the blood. To prepare the infusion, you need to pour a tablespoon of chopped flowers with 35 fl oz of boiling water, infuse it for three hours, then strain and drink a glass half an hour before a meal during a month. 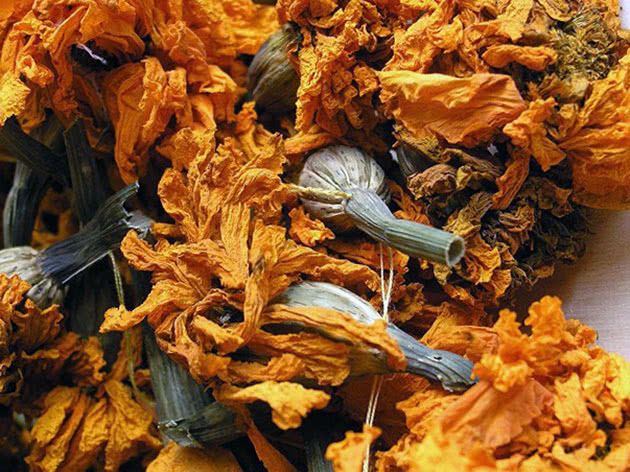 Baths with the addition of marigold decoction have a beneficial effect on the nervous system, relieve stress and anxiety, so they are recommended for depression and neurosis. In addition, long time ago the peoples of South America used marigolds for food as a seasoning, for making sauces, baked goods, and marinades. In the markets of the Caucasus, marigolds are sold as a powder for pilau, satsivi and soups and culinary specialists call them “Imeretian saffron". The French grow marigolds on an industrial scale to satisfy the demands of their gourmets. If used for canning, the marigold leaves make the canned vegetables elastic and fragrant. 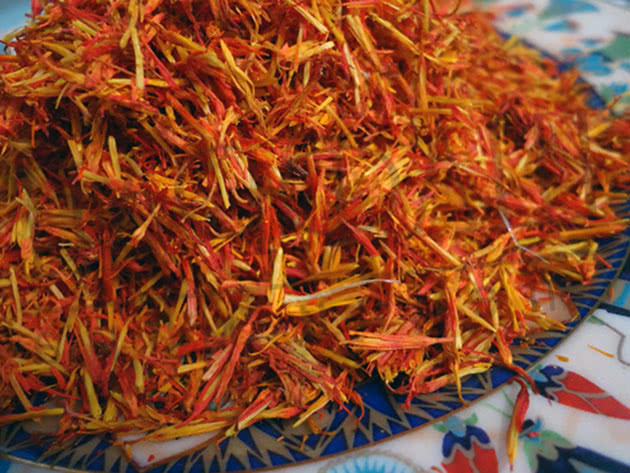 Here is the recipe for homemade cookies that you will like: 4 whites are whipped into a foam; 2 tablespoons of fresh marigold petals are rubbed with 3.5 oz of sugar; rubbing 4 tablespoons of butter, gradually add 4 yolks, petals with sugar, then 3.5 oz of flour, and gently lay out the whipped whites and gently mix it; put the dough on a baking tray and bake until the cake turns golden. Cool the cake and cut it into square pieces.

Species and varieties of marigolds 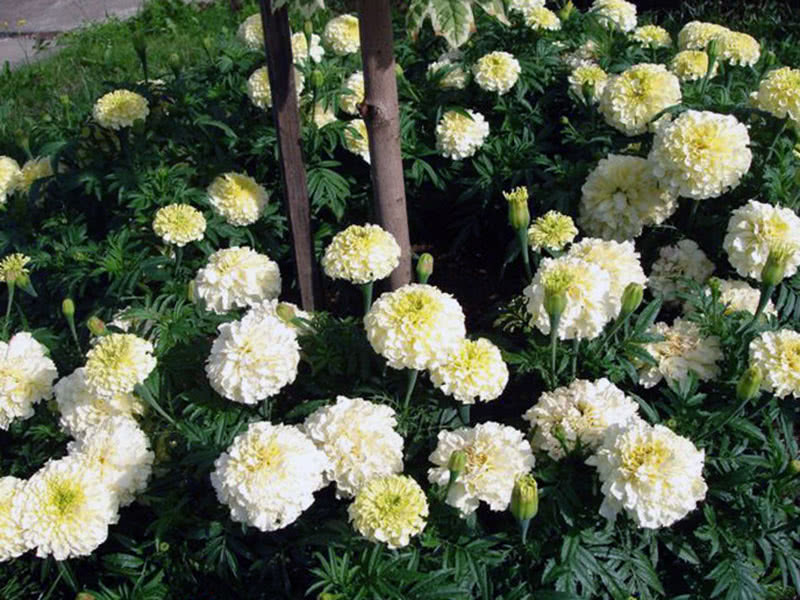 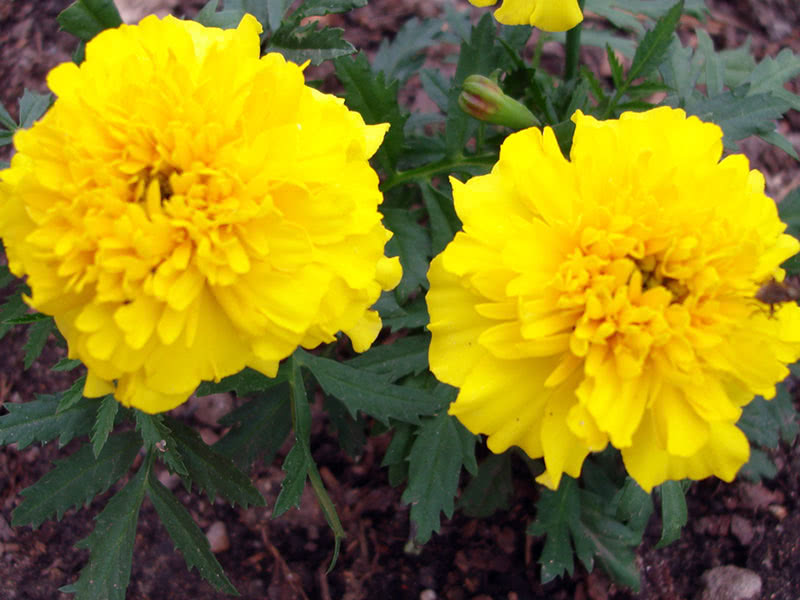 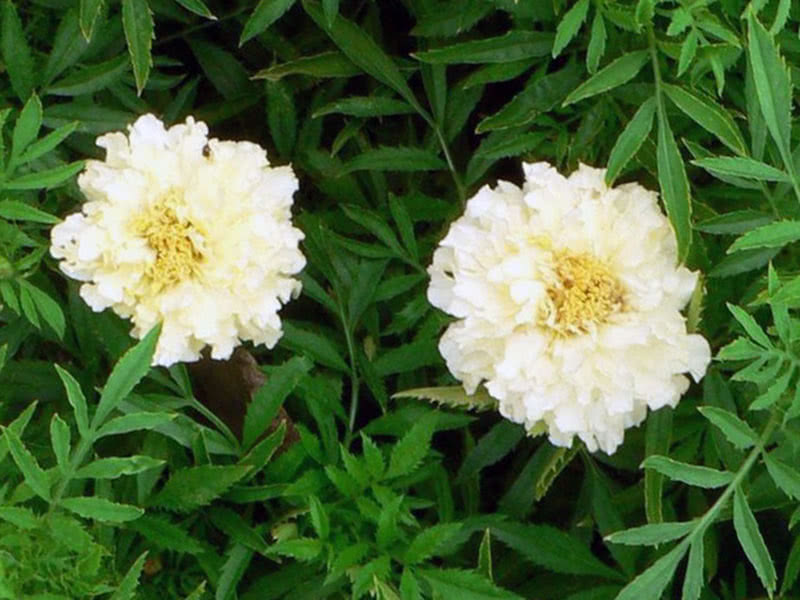 are low and rarely reach more than 24 inches in height. They are compact bushes with a lot of double and simple inflorescences the diameter of which rarely exceeds 3 inches. These marigolds are also called sprawling. The varieties that are popular among the florists are Bonanza (Bonanza Bolero, Bonanza Orange, Bonanza Flame, etc.), up to 12 inches high, with highly ornamental double flowers 2-2.4 inches in diameter and it is characterized by a long flowering; Carmen marigolds are very beautiful, they decorate the flower bed with double inflorescences with wavy petals of red-brown on the edges and orange-yellow in the middle. 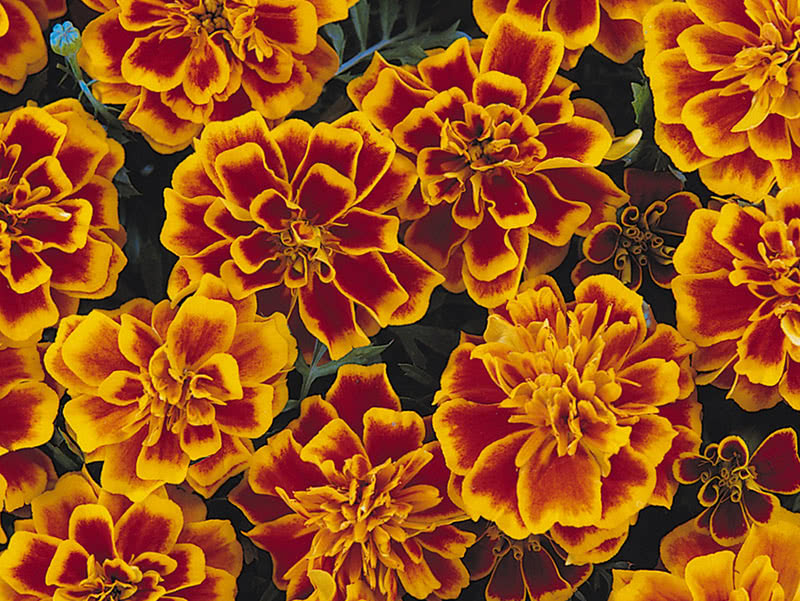 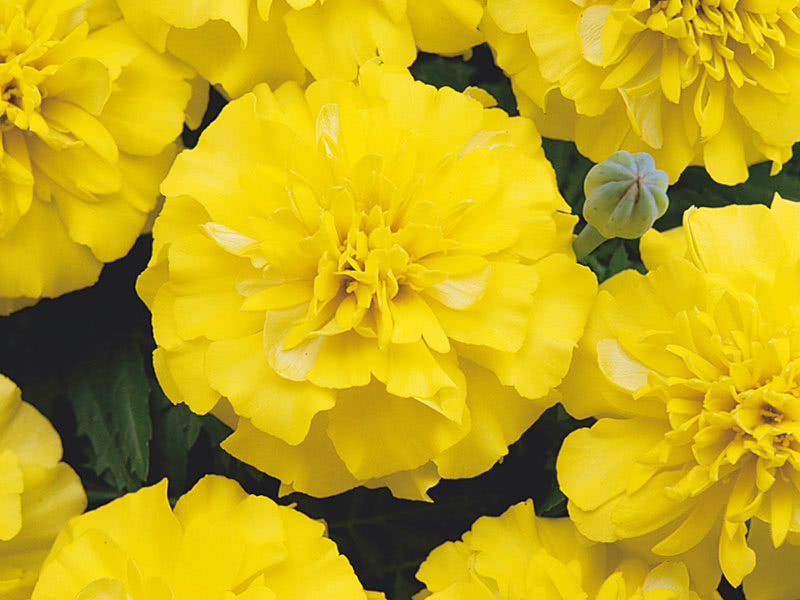 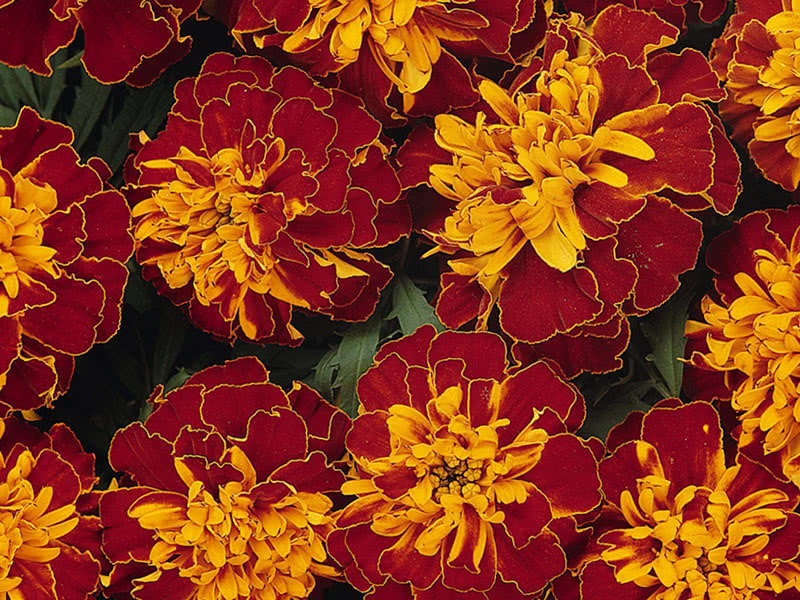 differ from all other species. Firstly, they have very beautiful gentle lace leaves and they seem to soar in the air, exuding the most delicate aroma. Secondly, their small inflorescences are so numerous that they look like fireworks of red-orange, golden-yellow and golden-orange lights. They have been cultivated since 1795. Today there are about 70 varieties. They are not higher than 16 inches and have a powerful root system and additional roots on the lower part of the stems. The most interesting varieties are Ursula (golden-orange inflorescences), Golden Jam, Gnome, Lulu (golden-yellow inflorescences), Paprika (red-orange inflorescences). 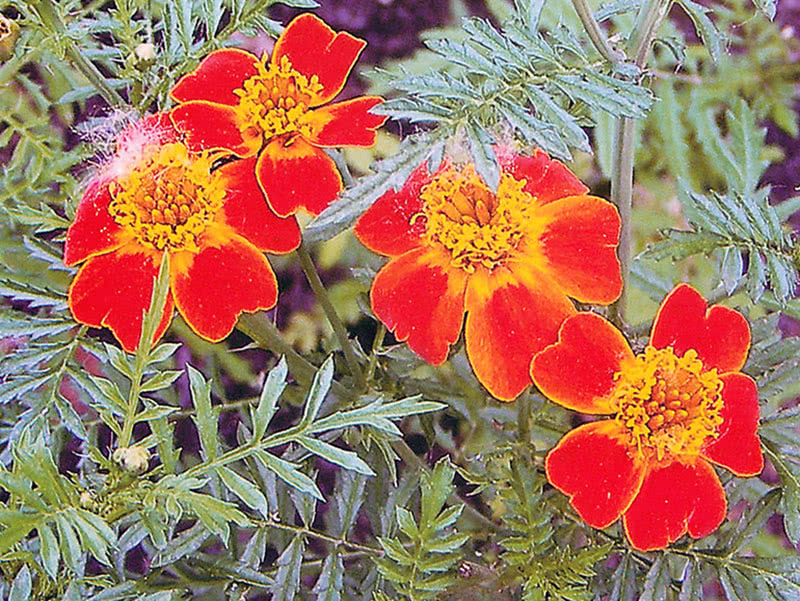 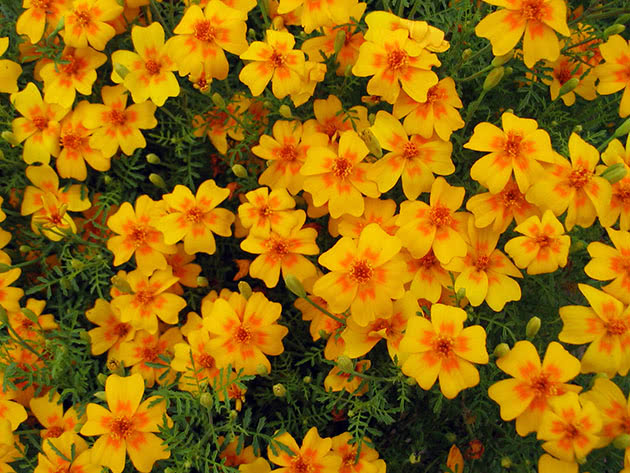 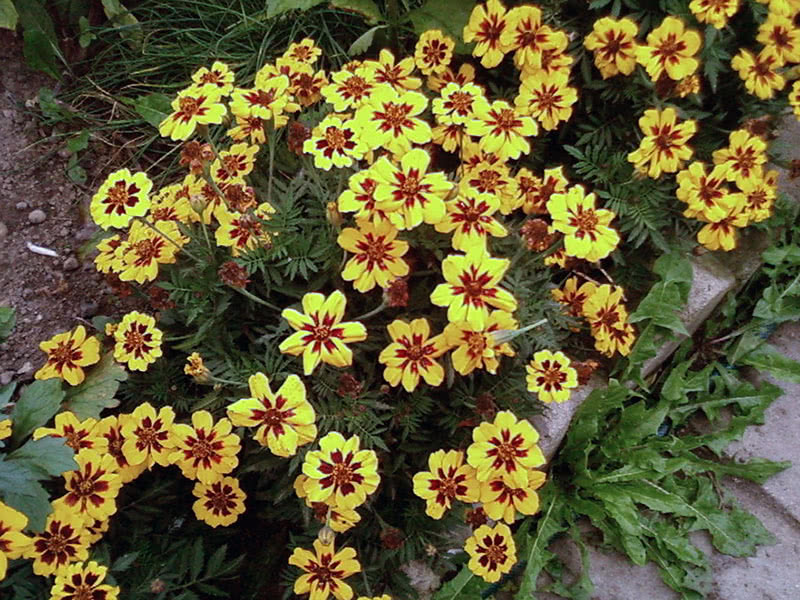 Growing of marigold from seeds

Planting of marigolds is not difficult even for a beginner, since these flowers are absolutely unpretentious. You can cover a blooming bush with soil, and it will certainly take root and please you with a long flowering. And you can just sow seeds in the open ground. Do this in May, when the soil is sufficiently warmed up. Make furrow with a trowel about 2 inches deep, pour it with water, sow seeds into the furrow and sprinkle them with soil. In a couple of weeks the sprouts will appear, and if they get too thick, plant them out. But for those who are not looking for easy ways and are ready to challenge themselves as a breeder, we will tell you how to sow marigolds, how to grow marigolds from seedlings, how to grow marigolds from seeds and when to plant marigolds to get seedlings.

Preparation of seeds for planting

Seeds of marigolds are purchased only for the first planting, because at the end of flowering you can easily get seeds from your own faded marigolds. You just need to let a few inflorescences dry well on the bush, and if there is no rain, you can easily get the ripened seeds from the capsule, dry and store them until the spring sowing. Just remember that almost all marigolds existing in the culture are hybrids that means that every fourth seedling does not preserve varietal properties and can inherit either paternal or maternal features. Many planters carry out planting of marigolds for getting seedlings by sprouted seeds. For germination, spread the seeds on a saucer, covered with a damp cloth, place the saucer in a plastic bag and put it in a warm place. In three days the seeds should break the shell. 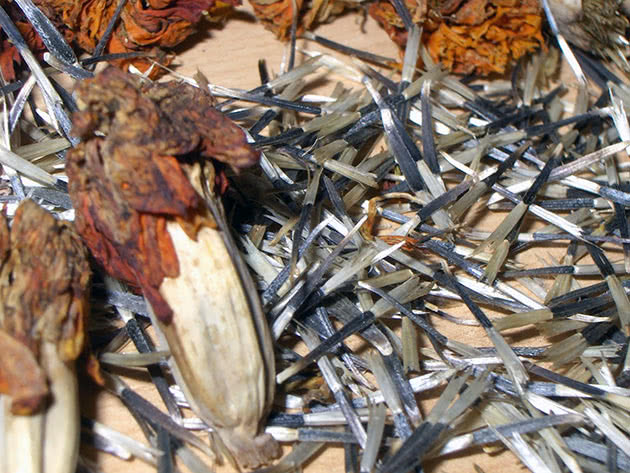 When to sow marigolds to get seedlings

The earlier you sow marigolds to get seedlings (at least in the early spring), the earlier they will bloom. If you grow different species, then you should know that the first ones to be sown are Mexican marigolds (in the middle of March), and in early April low-growing and small-flowered marigolds are sown, and then all three species will bloom in June. Growing of marigold seedlings is a simple task, but there are some points that you should keep in mind. Prepare a soil mixture: humus, peat, turf, sand (1: 1: 1: 0.5) and disinfect it by a fungicide disinfectant solution or a dark pink solution of potassium permanganate. At the bottom of the container there should be a drainage layer of rubble, sand or expanded clay 1.2 inches high, then add a fertilizer (any organics, except fresh manure) to the soil. At a distance of 0.6-0.8 inch from each other, make furrows, sow the seeds and cover them with a thin layer of soil. You should water the seedlings very carefully not to wash the soil out. Containers are kept in a warm place (72-77 ° F) and make sure that the soil does not dry out. The sprouts should appear no later than in a week, then the container must be placed in a light room and the temperature should be slightly lowered (59- 64° F). 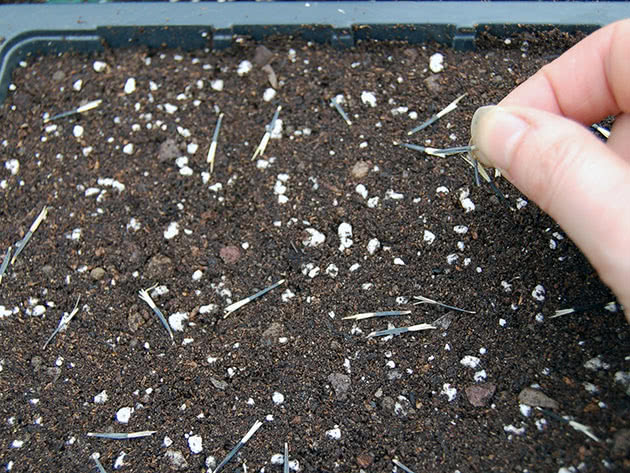 When to plant marigolds

In the open ground seedlings are planted after the date of the last frosts: marigolds are native to warm areas and do not tolerate cold weather. In addition, it is necessary to wait for the seedlings to form at least 3 leaves and a powerful root system. Usually this happens in late May or early June. Soil for marigolds should be nutritious, well-moistened in the first half of summer, loamy and neutral. If the soil is infertile, you should use fertilizers 2-3 times during the growing season. 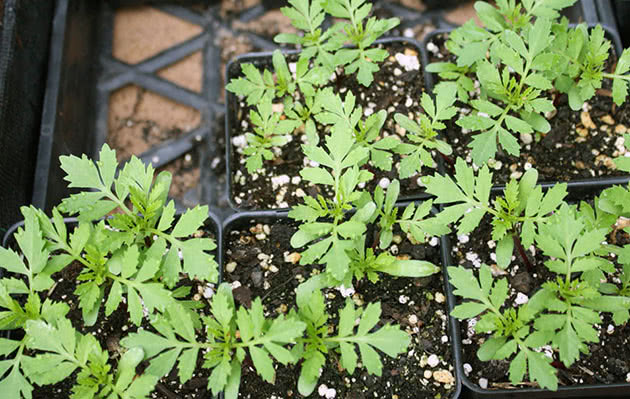 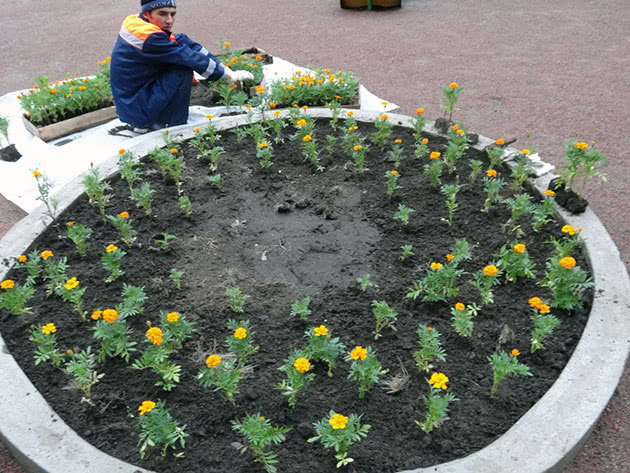 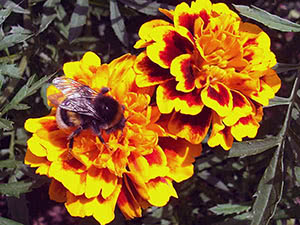 Marigolds love bright light, and although they tolerate half-shade and even shadow, they bloom in the strongest sunlight. During the growth, watering should be sufficient, but as soon as inflorescences begin to form, watering should be decreased for moisture not to stagnate: this makes the plant rot and it does not bloom as a result. It is not necessary to fertilize marigolds, but if you feed them, the marigolds will be grateful. It is necessary to apply combined fertilizers when the seedlings reach a height of 4 inches, then with the appearance of the first buds and, finally, at the very beginning of flowering. 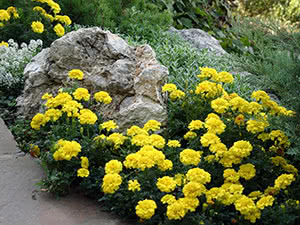 Marigolds need a regular weeding and loosening of the soil, otherwise it will be difficult for them to breathe. In summer, if the marigolds become too large, you should prune them to form beautiful bushes. Remove the faded inflorescences, and the plants will bloom even more abundantly. The peculiar aroma of marigolds and the phytoncides contained in them serve as a protection against fungal diseases not only for the plants themselves, but also for those growing in the neighborhood. Not for nothing do many flower growers frame the entire garden area with marigolds. But if the summer is too wet, then snails and slugs may appear. Smell of the bleach in jars placed between the plants scares them away. Sometimes on the leaves and stems there is gray rot. In this case, the affected plants will have to be destroyed so that they do not infect the other marigolds. In a dry summer, plants can be attacked by a spider mite that can be controlled by the infusion of onion, yarrow, red hot pepper. In order to prevent it, try to increase the level of humidity by sprinkling of water around the marigold several times a day.

As a rule, ornamental marigolds are annual plants, so after flowering during autumn digging they are simply pulled out. If you want to grow marigolds in the next year, collect the seeds, dry and store them until the end of March or beginning of February.

Do not throw away dried inflorescences, they will be useful for you in the household and in your home first aid kit. For example, if you have to work at a computer long hours, eat 2-3 small dark marigold heads before a meal or add them to a salad. 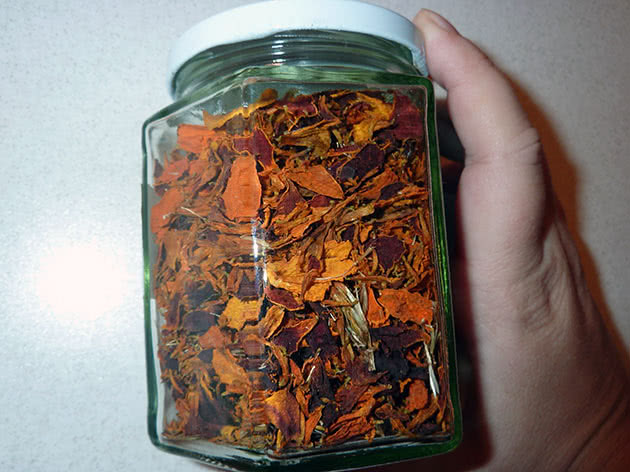 If there are ascarids or pinworms, adults should take 5 marigold heads before bedtime for a week, and children should take 2-3 of them (depending on age).

If you throw a bucket of withered marigolds in the compost pit, there will be no midges around it.

Put a bunch of marigolds on the windowsill and at the front door, and unexpected unkind visitors will pass by your house.

And at last we offer you several interesting recipes.