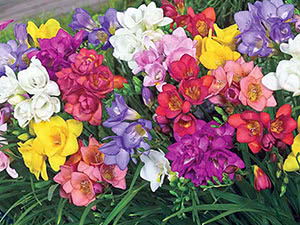 Freesia is one of the most charming bulbous plants that is grown in the garden and at home. Freesia (lat. Freesia) is a genus of herbaceous tuberous perennials in the family Iridaceae that includes about 20 species. The most famous freesia is hybrid freesia that appeared as a result of crossing several species about a century ago. This plant is native to South Africa where it grows on wet beaches and among shrubs. It was named after Friedrich Freese, a German botanist and a doctor.

Freesia is elegant, tender and delicate, its fragrant resembles a lily-of-the-valley scent, and that is why it is sometimes called "Cape lily-of-the-valley". All these qualities make this flower popular as a cut flower among florists. 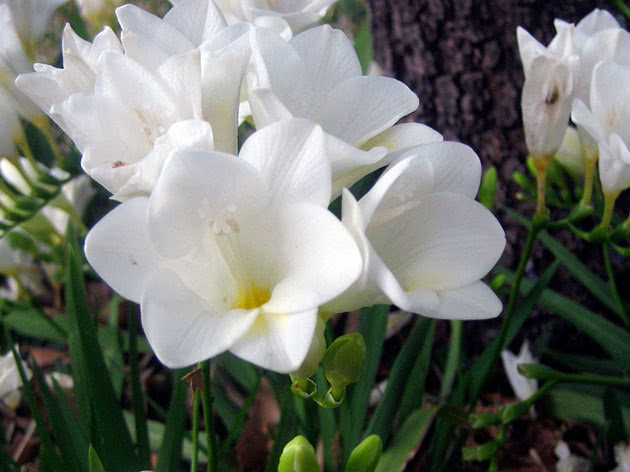 Hybrid freesia reaches 3.2 ft height, has a bare, strongly branched stem, corm is covered with thin brownish scales. The leaves are thin, with a central vein, the length is 6-8 inches and the width is 0.4-0.6 inch. Fragrant flowers are 1.1-2 inches long and collected in loose one-sided inflorescences. Coloring of flowers can be any – white, red, orange, blue, purple, yellow, cream, pink. Often the flower's throat is of a contrasting color. The fruit of freesia is a capsule.

Species and varieties of freesia

Hybrid freesia (Freesia hybrida) is mostly used in floriculture. It was obtained by crossing such species as freesia refracta and freesia armstrongii. And these species of freesias gave rise to many other varieties we are going to tell you about.

– a plant that reaches a height of 26-27 inches. Flowers (scarlet, pink or red) are bell-shaped, fragrant, collected in panicles of 3-5 pieces. The tube is white with yellow spots. Leaves are ensate, long. The varieties of this freesia bloom from May to June.

One of the most beautiful varieties of freesia armstrongii is Cardinal. This freesia is red, single, tall, high (27.5 inches). One bulb gives three peduncles, 14 inches long, the number of flowers in a panicle is from 9 to 11 pieces, the length of the inflorescence is 3.5 inches. Flowers are dark red with yellow spots, stamens are yellow, pistil is blue, anthers are purple. 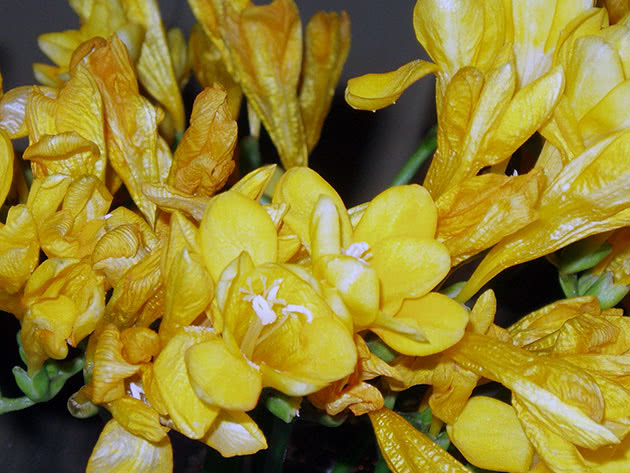 This species combines the best qualities of its ancestors. Its bush is high (up to 3.2 ft) and heavily branched, the brushes consist of large (2-3 inches in diameter) fragrant single colored or bicolored flowers of violet, crimson, yellow and other shades. 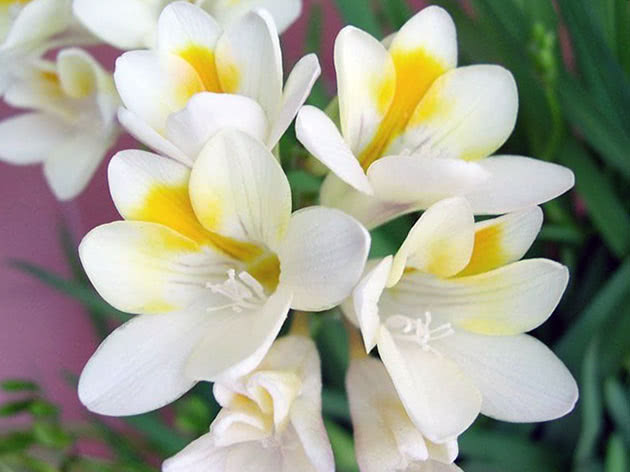 This species is distinguished by small size (not more than 16 inches). Stems are thin, spreading, inflorescence is a paniculate spike that has 2-5 white or yellow-orange flowers. It blooms in April.

All three cultivated species have the varieties with simple or double flowers. Simple freesia has one row of petals, double freesia has two or more rows of petals. In the flower shop you can buy not only a specific variety of freesia, but also a kit of several varieties as a mix of freesia will give you the opportunity to grow freesias of different shapes and shades in your garden.

It is the best of all to grow freesia in a greenhouse or a hothouse, where it is easier to create necessary conditions, but this is the task for experienced or professional gardeners. Actually, freesia can be grown all year round, but since garden freesia does not overwinter in the open field in our climate zone, in autumn its tubers must be taken away from the ground. But this plant is also used as a pot flower, and at home freesia starts blooming in winter. There are general requirements for all species of freesia that we are going to introduce you to. 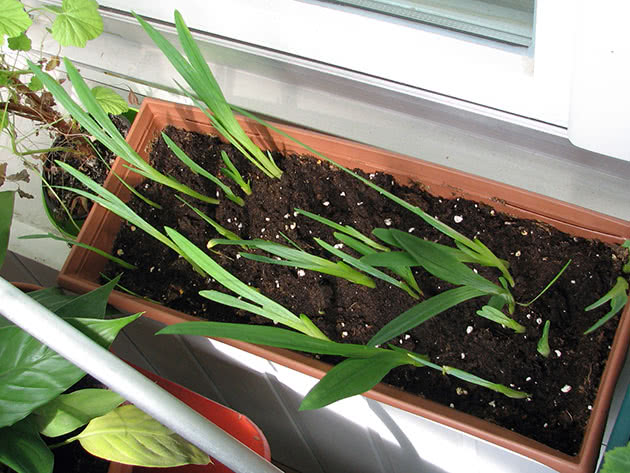 Freesia in the open field

How to grow freesia

Before freesia planting in the open ground, freesia bulbs should grow in size a little. In March-April, clean the corms from scales and, to prevent fungal diseases, keep them in a 0.2% solution of a fungicide for half an hour. Then place them in peat pots with fertile loose soil to a depth of 2 inches and keep them on a well-lit windowsill or on a warm balcony before planting out. Some experienced flower growers grow freesia from seeds, and although this process is tedious and unreliable, we will tell you how it is done. Carefully scatter the seeds over prepared soil, add 0.8 inch layer of substrate for seeds, cover with a foil or glass and keep it in a bright place. In twenty days there will be shoots. When they grow up to 0.8-1.2 inches, remove the glass and thin them well. Plant them out in the ground in mid-May. 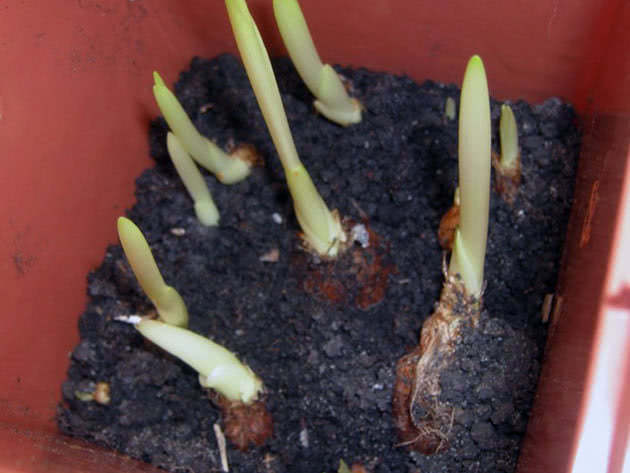 Freesia planting in the open ground is carried out in spring after the date of the last frost (around May 9). Dig the planting holes 1.2-2.4 inches deep. Large tubers are planted at a distance of 2 inches, small tubers are planted at a distance of 1.2 inches. The distance between the rows is 6 inches. Level the soil and mulch it with coniferous soil or peat to protect the soil and freesia roots from overheating. By August your freesia will get 1-3 flower stalks, and it will bloom until the beginning of October. 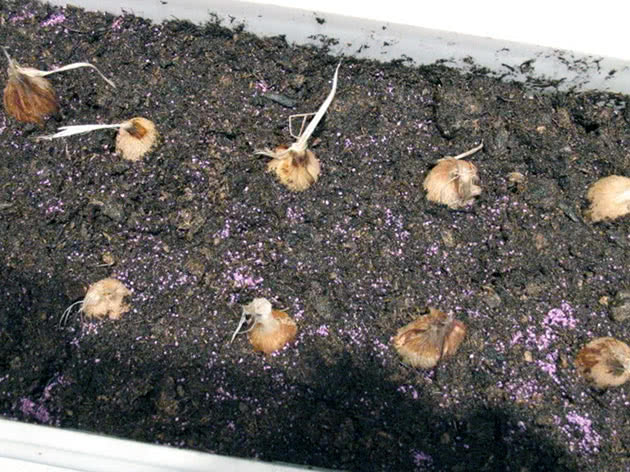 Care for freesia in the garden

During the period of freesia growth, feeding is necessary. The freesia shoots are fertilized by ammonium nitrate (0.7 oz of saltpeter per 18 pints of water), then twice a month with potassium salt and superphosphate (0.7 oz and 1.4 oz, respectively, per 18 pints of water). In addition, the garden freesia needs loosening of the soil and weeding, especially in the first half of the growing season. Growing freesia in the garden implies a certain regime of watering of the plant. During the growth and flowering, it is necessary to water freesia abundantly and regularly, the soil must be constantly moist. Freesia blooms from three to six weeks, then watering is gradually reduced and ceased. It is also advisable to increase the humidity of the air by spraying the stems and leaves of freesia. It should be done in the evening time for the moisture to get absorbed. In the garden freesia is kept until frost.

Freesia has the same diseases and pests as gladiolus has: thrips, aphids, spider mites, as well as scab, fusariosis and all kinds of rot. Affected plants need to be removed and destroyed, and in order to avoid all these troubles, before storing the bulbs needs to be disinfected with a light solution of potassium permanganate and this procedure should be repeated before planting. During the growth and flowering, follow the regime and control the amount of watering: do not over-moisten the soil, but do not let it dry up.

How to plant freesia

Growing freesia at home is carried out, mainly, for its winter-spring flowering. Just imagine that you have a flowering garden on your windowsill in winter. In order to get a blooming freesia in January, freesia bulbs must be planted in the soil before the beginning of September, after having being soaked in a solution of a fertilizer with azotobacter at a rate of 0.017 oz per 18 pints of water for half an hour. You can also treat corms with stimulants of growth. At the bottom of the pot with a diameter of 6 inches, it is necessary to put a drainage mixture and charcoal, then add the appropriate soil (sand, turf and humus 1: 2: 1) with a small amount of potassium phosphate fertilizers and place 5-6 bulbs at a depth of 2-2.4 inches. The pot with freesia is placed in a cool (50-59 ºF) bright room and is kept without watering, but as soon as the leaves appear, the plant is transferred to a warm place (68-72 ºF) with watering resumed. 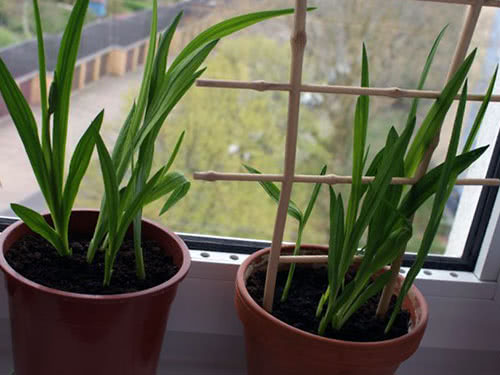 Care for freesia at home

Planting and caring for freesia at home is much easier than caring for it in the garden or in the hothouse, but there are some features that are important to know about. In autumn-winter the light-day is shorter than in summer, and freesia needs light for at least 12 hours a day. Therefore, you will have to arrange supplemental light with fluorescent lights, if you do not have the opportunity to keep freesia on the east or west window sills. In addition, you should arrange an additional support for freesia since it has weak stems and can not withstand the weight of the flowers. Watering is carried out with sedimented water when the topsoil gets dried out. During the flowering period, irrigation should be not only regular, but also heavy. During the heating season it is extremely important to keep a high humidity in the room with freesia, so be sure to spray the plants. Or keep them in a cool place, for example, on a glassed-in loggia. Also, feed the freesia with mineral fertilizers once every two weeks, until the leaves fade. 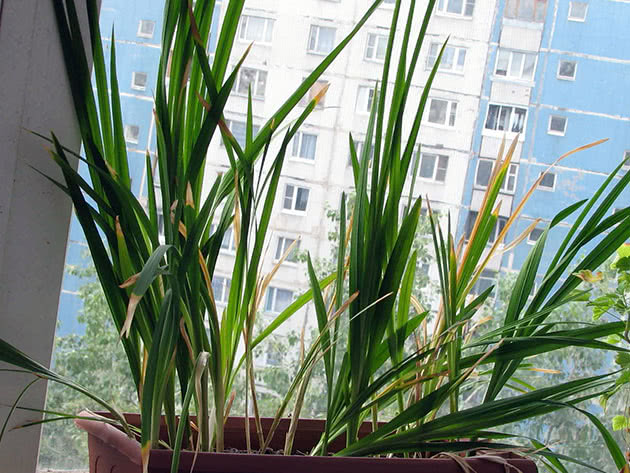 As soon as your freesia finishes blooming, the leaves and stem are cut off, and the bulb is continued to be watered for a month and a half for new bulbs to form. Then the corms are taken away from the ground, disinfected with a solution of potassium permanganate, dried in a warm place for several days and stored.

Freesia in the garden

At the end of September or the beginning of October, when the freesia fades, and the leaves turn yellow, but still do not dry out, corms are removed from the ground, the stem with leaves is cut off, the bulbs are cleaned from the soil, roots and old scales, and soaked in a mild disinfectant solution of sodium permanganate or any other fungicide for 30 minutes and dried out at 77-82 °F for a few days in a ventilated room. Then the bulbs are sorted, removing damaged or rotted ones, and stored.

Freesia bulbs are stored in string bags at a temperature of 68-77 ºF in a room with high humidity (70-80 %). If there is no such room, place a container of water under the bag with bulbs. The bulbs should be reviewed at least once a month, removing rotted or diseased corms. A month before planting, place the bulbs in a cool place (50-59 °F). 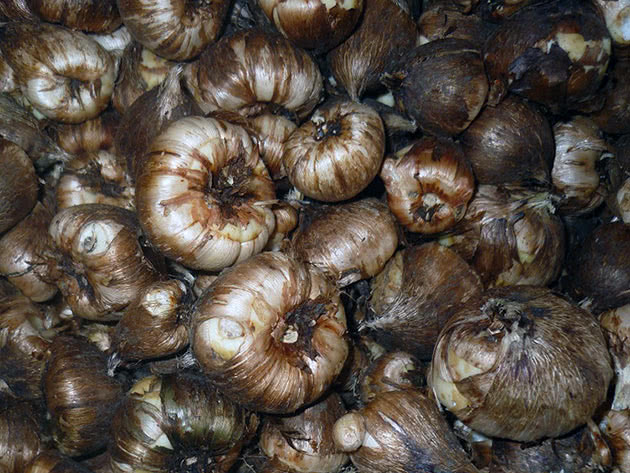 Some gardeners recommend to store freesia corms in a dry peat. And if in your area there are no cold and frosty winters, you can leave the bulbs in the ground, covering them with fallen leaves or fir twigs.