Cyclamen at home – care and growing from seeds 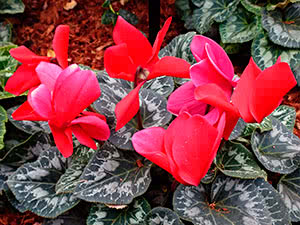 Cyclamen plant belongs to the genus of herbaceous perennials in the family Myrsinaceae, although some scientists consider it to be in the family Primulaceae. The name of the plant is derived from the Latin word that means “round”, as a form of cyclamen tubers. The genus includes about 20 species.
The cyclamen flower is native to the Mediterranean, Iran and Northeast Africa, but most of all it grows in Turkey. Some species of cyclamen are successfully cultivated as indoor plants. Diluted cyclamen juice is used to treat sinusitis, but you should be careful as it can cause the burn of the mucous membrane.

Cyclamen at home – requirements for growing

The cyclamen root is a flattened round tuber that is up to 6 inches in diameter with a single growth point. If it is damaged, the bulb will be destroyed. The leaves of the cyclamen are radical, leathery, cordate, growing on petioles up to 12 inches in length, dark green in color with a grayish-silvery pattern. The flowers of parental species look like wild butterflies – the petals are bent, pointed, fringed, and the color palette is incredibly diverse – white, pink, all shades of red, burgundy and purple. Cyclamen blooms longer than three months.

There is an opinion that indoor cyclamen is a capricious plant. Do not believe it. Cyclamen is unpretentious, just as any plant, it has certain agricultural requirements that if followed will allow you to easily cope with its cultivation. So: 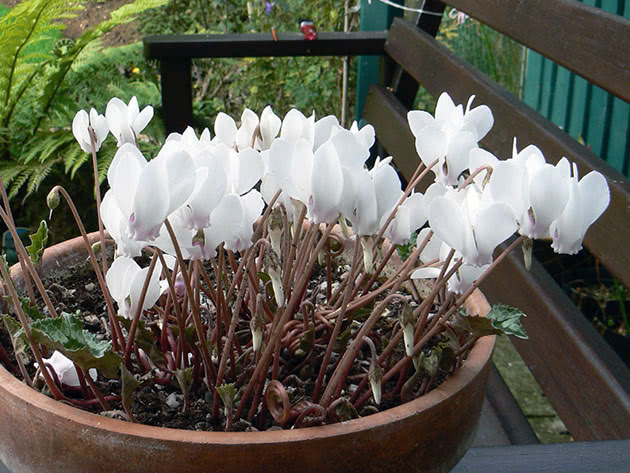 Growing of cyclamen from seeds

How to grow cyclamen

Such species as Persian cyclamen is propagated by seeds. Seeds of cyclamen are sown in February or March, although at home cyclamens can be propagated at any time of the year. On the eve of planting, soak the seeds for 12 hours in a pale pink solution of potassium permanganate or in growth stimulants, prepared in accordance with the instructions. After that, sow the seeds into a soil mixture for cyclamens, consisting of two parts of pre-steamed soil, one part of a nutritious soil mixture and one part of river sand for loosening the soil. It would be better if you make a groove 0.4 inch deep in the soil, water it well and sow the seeds 0.8-1.2 inches apart. Sprinkle the seeds with soil and cover the container with glass or foil. At a temperature of 64-68 °F seeds germinate in 30-60 days, although there are slow-growing varieties that germinate in five or more months. 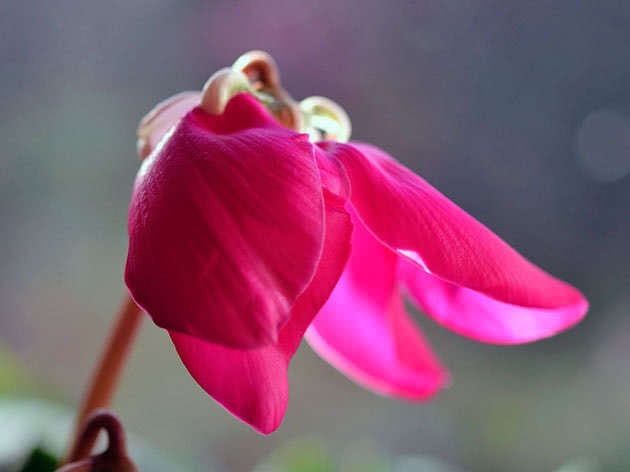 When sprouts appear, remove the cover and move the container to a lighter place, but away from direct sunlight. When two true leaves appear, 2-3 shoots are pricked out into individual pots, completely covering the bulbs with soil. The soil must be loose, nutritious, or use the same mixture into which you sowed the seeds. In 6-7 months cyclamens can be transplanted into the pots with a diameter of 2.4-2.8 inches and with the same soil. In this case cyclamen bulbs should be buried no more than two thirds of its size, so that the growth point is above the surface of the soil. If care for cyclamens at home is correct, you can see its flowering in a year and a half after seeding. 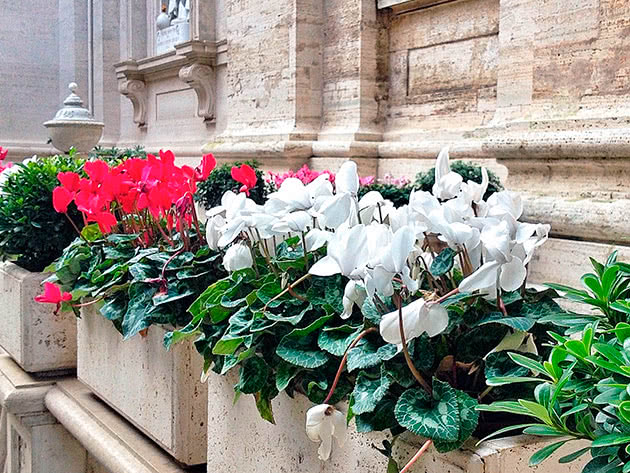 Cyclamen requires bright diffused light and a cool temperature (43-54 °F). In addition, it is necessary to ventilate the room often, but you should avoid drafts as it is unacceptable for cyclamen. Frequent spraying will make the air humidity in the room higher that cyclamen really likes. In addition, it will help lower the temperature by a couple of degrees in summer heat. Feeding with combined fertilizers for flowering plants is very necessary for the plant, but be careful with the consistency – this plant is better to be underfed than overfed.

How to water cyclamen

In the period of active growth, cyclamen needs regular watering, but try not to overwater it: irrigation should be sufficient, but not excessive. To be sure that the plant has enough moisture, use the method of bottom watering – put the pot with cyclamen in a container with water and keep it until the top layer of soil gets wet, then take away the pot from the water and let it drain. By the way, this method will not allow moisture to get on the top of the tuber, where the growth point is located, thus the risk of plant rotting will be minimized. 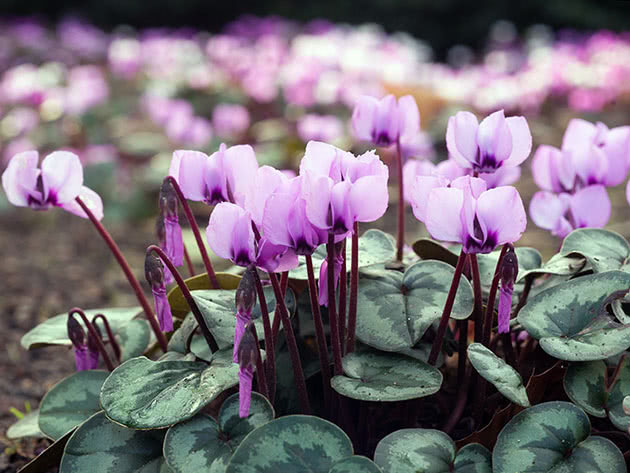 Cyclamen is reproduced by seeds, that is described in detail in the previous section, and by vegetative division of the tuber. But you can divide only those bulbs that have more than one growth point, and this happens very rarely. In addition, the process of dividing and rooting of the part of the tuber is often unsuccessful for new plant growers. So we can assume that the seed method of cyclamen propagation is the only possible one.

Sometimes just bought cyclamen drops flowers and even leaves the day after you bring it at home. Do not panic as this is quite normal behavior for cyclamen. It needs to get used to your home, and you should try to create comfortable conditions for it. Cyclamen should be kept in the lightest and coolest place at home. Check the substrate, and if it is dry, let the plant have a drink, using bottom watering or watering in a tray – in this case, the plant will receive exactly as much moisture as it needs. Be sure to spray the plant. Do not feed cyclamen two to three months after the purchase – the plants in nurseries are well filled with fertilizers. 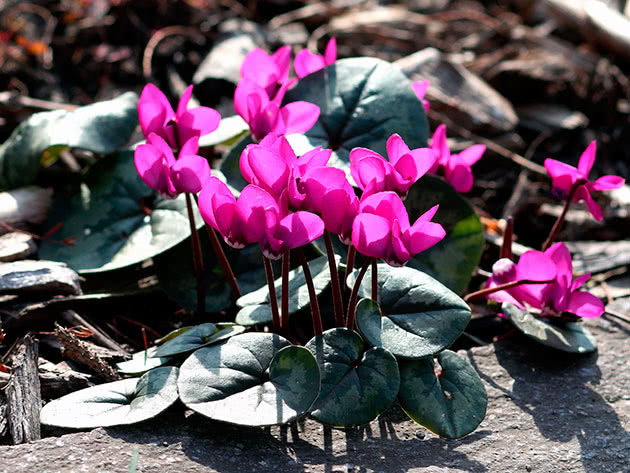 Cyclamen blooms either in summer or in winter, and the duration of cyclamen flowering directly depends on how you follow the rules of caring for it. The best conditions for cyclamen to bloom heavily and for a long time are as follows: a lot of light, but without direct sunlight; the optimal temperature for flowering is not lower than 50ºF and not higher than 68ºF. Watering should be either bottom, or in a tray, so moisture does not get on the point of growth, or on the leaves with flowers. Remove the withered flowers.

How to transplant cyclamen

You should transplant cyclamen into a new substrate about every two years, if the pot becomes too small for the bulb. You should do this at the end of the dormant period before the beginning of active vegetation. But please note that cyclamen does not need a spacious pot, as it blooms well only in small pots, when the layer of the soil between the bulb and the wall of the pot is not more than 0.8-1.2 inches. For example, a pot with a diameter of 2.7-3 inches is suitable for an 1-1.5 years old bulb, and a pot with a diameter of 5.5-6 inches is suitable for a two-three-year bulb. In a new pot, put haydite for drainage, a layer of fresh substrate, then put a bulb with the soil clod and roots and add the substrate so that the tuber is immersed in it by two-thirds. Tamp the soil well. Transplanted cyclamen will need fertilizer not earlier than in a month. 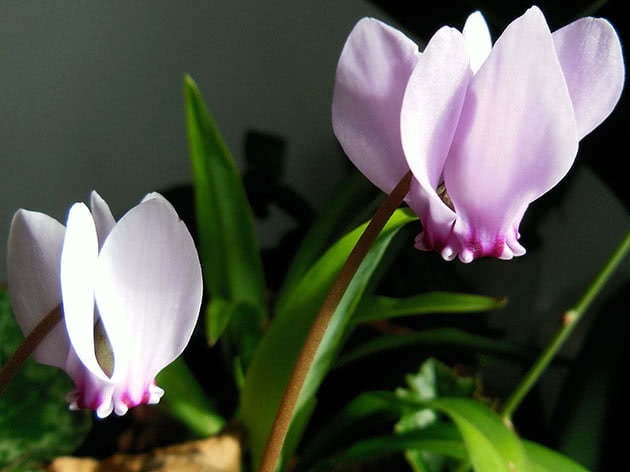 Cyclamen transplantation after purchase is carried out only if it is in a dormant period, which of itself is strange – well, who buys a bulb buried in the soil? If you bought a flowering cyclamen, wait until it finishes blooming and rests, and then, at the very beginning of the growing season, if there is no room for the bulb or you want to change the pot to more beautiful one, transplant cyclamen in the way described above. Or, if the plant feels well in the old pot, it is better to put a current pot with cyclamen in a beautiful pot.

Pests and diseases of cyclamen

If the rules of care for the plant are observed, neither insects, nor viral or bacterial diseases cannot affect your plant, but improper care can lead to the decay of the bulb in case of constant overwatering of the soil or to the appearance of a spider mite in case of insufficient watering. Correct your mistakes as quickly as possible and do not repeat them again, and then cyclamen will not have any problems, and you will not have problems with it. 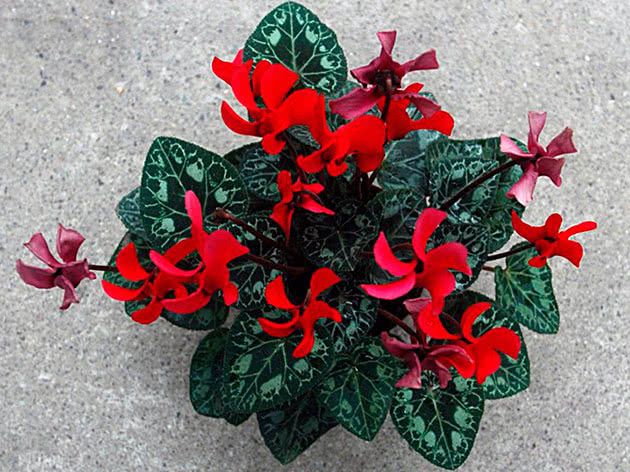 If you follow the rules of watering, and cyclamen still turns yellow, then there can be just hot. Spray it as often as possible and find a cooler place for it, otherwise cyclamen flowers can start drying because of heat. If the leaves turn yellow after cyclamen has finished flowering, then it's just getting ready for the dormant period, and you should not worry. 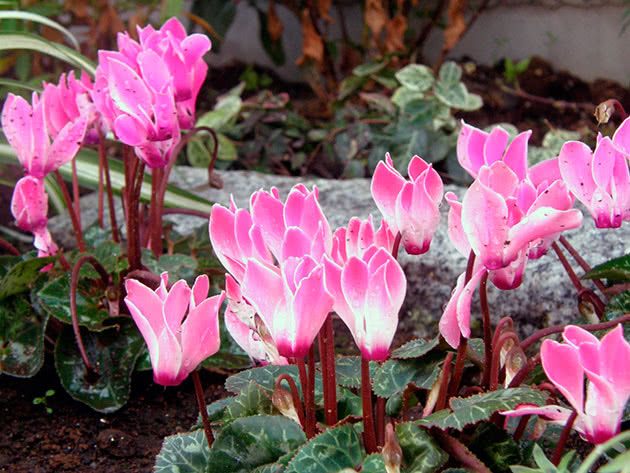 Cyclamen does not bloom

If cyclamen gets little moisture when watered or if you do not care about the required humidity level in the room, you are unlikely to see cyclamen bloom. Cyclamen does not bloom in too warm room, especially if it does not get used to such temperature. Sometimes, with the lapse of time, the plant gets used to a high temperature in the room and, if all other conditions are observed by you, cyclamen eventually starts blooming.

When flowering is finished, cyclamen leaves gradually turn yellow that indicates that it is preparing for a dormant period. Yellow leaves should be removed by twisting them until they are separated from the bulb. Watering should be gradually reduced. The tuber resting in the soil is watered only occasionally keeping the plant in a shaded place until cyclamen again shows the signs of life.

In culture, there are mainly two species of cyclamen – Persian and European, as well as their derivatives.

– it is a tuber plant with small leaves and fragrant pink and purple flowers, but it has varieties of white, carmine and other colors. It has been cultivated since 1607. European cyclamen is much more tolerant to usual indoor temperatures than other species, but it also prefers cool air to stuffiness. This species does not have a distinct dormant period, in addition, its tubers sometimes produce daughter bulbs that can be used for propagation. European cyclamen blooms from the end of spring and almost until winter. In summer it feels good on the balcony or in the garden, but it must be protected from direct sunlight and penetration of slugs and earthworm into the pot by covering the pot with a nylon stocking. 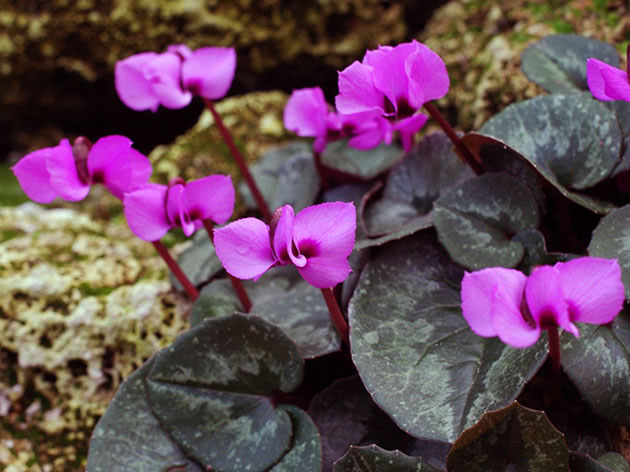 is the most popular cyclamen in culture due to incredible beauty of its flowers that, when they are fully opened, seem to be turned inside out and its petals grow down until the plant sheds them without any signs of wilting. Colors of flowers are pink, dark purple, lilac, white, bright pink, and in most cases the throat of the flower has a different shade. The leaves of the Persian cyclamen are larger and more beautiful than of the European ones, they are highly ornamental. Recently, dwarf cultivars of the Persian cyclamen have become very popular. Besides dwarf varieties much better tolerate room temperature than tall varieties. Persian cyclamen blooms from late autumn to early spring, and then there is 9 month dormant period. It has been cultivated since 1731. 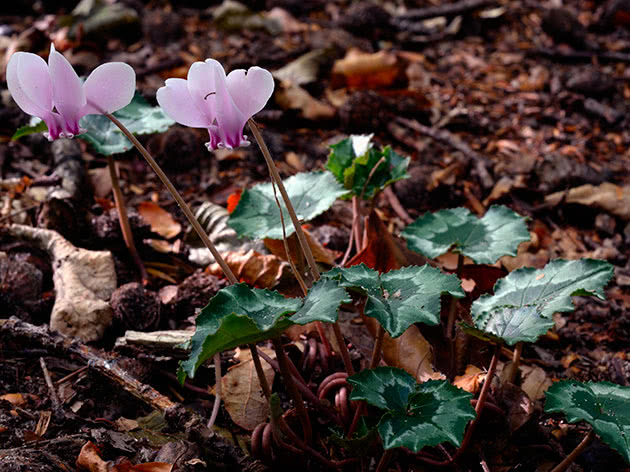